Creator Scott Frank and star Merritt Wever spoke to IndieWire about the historical inspirations for the town run by tough women. 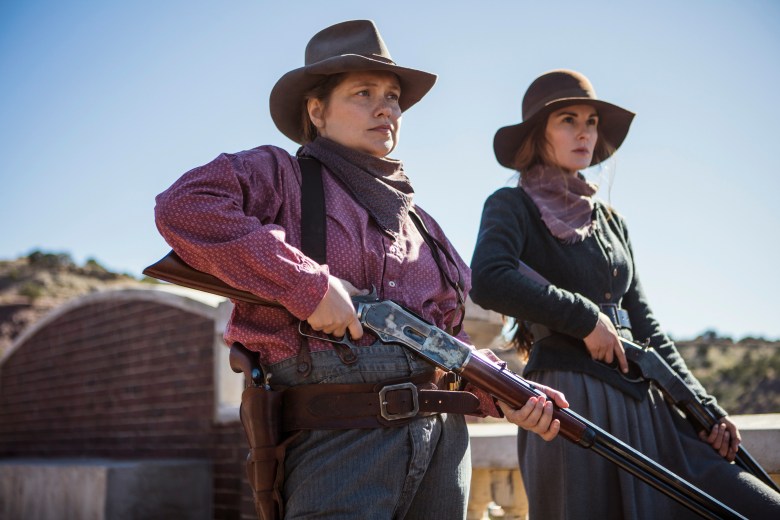 “Godless” may be a limited series drenched in blood from multiple massacres and shootouts, but creator Scott Frank had a more romantic intention when he began.

“When I first started thinking I wanted to write a love story, all I knew back in 2002 when I was starting this, is that I wanted to write a Western,” Frank said in an interview with IndieWire. “I had no idea what the story would be, I had no idea who the characters would be. Dialogue is really important to me, and I wasn’t sure if I could ever capture the voice, and I didn’t want it to be full of, ‘I reckon.’”

Frank turned to associate producer Mimi Munson for inspiration. She gave him a list of top Western novels to read to capture the voice and also researched real-life events.

In “Godless,” the town of La Belle is mainly populated by women — widows specifically — after a mining accident takes the lives of most of their husbands. The project started as a feature-length screenplay, but it never made it to the big screen. It wasn’t until Steven Soderbergh, who’s an executive producer on the series, suggested that Frank turn it into a TV series did the concept really take shape. “This was taking a screenplay and going deeper with it and almost turning it into a more novelistic story,” he said. “There were tons of scenes that I had cut [initially] that I could put back in.”

“A lot of the relationships between the women in La Belle weren’t deep enough for me, so they wanted to go deeper with them.”

After Mary Agnes McNue (Merritt Wever) loses her husband in the mining mishap, she takes over for him, wearing his trousers and running the town. She also strikes up a romance with Callie (Tess Frazer), a former prostitute who became La Belle’s school teacher, and while they don’t advertise their relationship, the don’t hide it either.

While gay or bisexual relationships have always existed, most Westerns have typically projected a straight, macho image. According to various accounts, though, male-male sexual relationships were plentiful — especially in areas where women were scarce — and were in fact not even seen as unusual or mutually exclusive with straight relationships. Although accounts of women having gay relationships are scarcer since historical records tended to skew male, there was a similar, practical acceptance of sexuality based on who was available.

“I read some books that [a historian] suggested, and I was glad for the context,” said Wever. “I was curious as to whether the way we think about sexuality and gender now is the way people thought about it back then. And from the material he directed me to, it was different… I don’t think it was uncommon and that it had more to do with being different, being an outsider, upsetting the herd. People didn’t like when you rocked the status quo.” On the show, Mary Agnes’ relationship isn’t remarked upon hardly at all, although at one point she does pointedly tell her brother Bill McNue (Scoot McNairy), who’s a widower, “I get lonely, same as you, Bill.”

Frank was inspired to create this relationship based upon other historical records he read. “I’d read about it in whaling communities in Nantucket when the captains are all gone,” he said. “I don’t know if it happened often, but it just seemed like something that would happen. And I thought the less light and shined on it, the better. I actually believe that Mary Agnes is happier with Callie than she probably was with her husband.”

This doesn’t mean that Mary Agnes hated her life before though, but she certainly has been able to explore more of her potential because of La Belle’s unique circumstances.

“I think [her husband] was the mine foreman, and she and her husband and Bill and Bill’s wife, were some of the first settlers of the town. I spoke to Scott about it,” said Wever. “It was a fine marriage. She didn’t hate her husband. It wasn’t that she was necessarily living a lie the whole time, but I think that the accident in the mine is an opportunity for her to live a different way.”

“It’s complicated for Mary Agnes because the tragedy of the mine and the accident has given her a bit of freedom and opportunity,” she added. “I think she sees trying to retain control over the mine and production of the mine as a way to have economic power and independence. But also she is now in a relationship with Callie and has said, ‘Fuck it,’ to corsets and things like that.”

One particular find helped Frank in telling the women’s stories and in developing their voices for the series.

“[Mimi] found a bunch of letters at the University of Research Library, UCLA, and they were fantastic in terms of catching people’s voices,” he said. “Some of them are incredibly heartbreaking and romantic, reading about women’s history and experiences they had living in the West.” Unfortunately, hardship was all too common for everyone, especially women in the Old West, and Alice Fletcher (Michelle Dockery) had an even harder lot than the women in La Belle. While many of them had been widowed by the mine accident, Alice was twice widowed.

“There were horrible things happening in the West on any given day,” said Frank. “And to survive, to make it out West, to just make that journey, it’s a real hard run, as [character Frank Griffin] says. It’s a very hard run. There’s all kinds of things that you’re fighting along the way and it was not just Indians, it was the elements. People would get washed away in floods.”

On the day that Alice comes out to New Mexico to get married, her husband is swept away in a flash flood in such a sudden and unexpected way that it feels fantastical.

“I liked the idea of people who were in circumstances they didn’t set out to be in,” said Frank. “In other words, they found themselves living a life they never expected to be living. So Alice is stuck on this ranch, she had come out here under very different circumstances and expected to lead a very different life. And on the day of her wedding, her husband is killed.”

Alice is then sexually assaulted, but saved by Bill McNue, who brings her to the local Paiute tribe to care for her. There, she meets her second husband, who later is found killed, shot in the back of the head. Because of these mysterious circumstances, she lives right outside La Belle, away from the other women and on her own land.

“You’re like, ‘Why is she so tough?’ at the beginning,” said Frank. “And then you go back and see what led up to where she is and what she experienced and that she survived, and you think, ‘Oh, of course she’s so tough.’”

“Godless” is currently streaming on Netflix.