Scott Frank's limited series left a lot to discuss after a wild ending that played into and upended expectations. 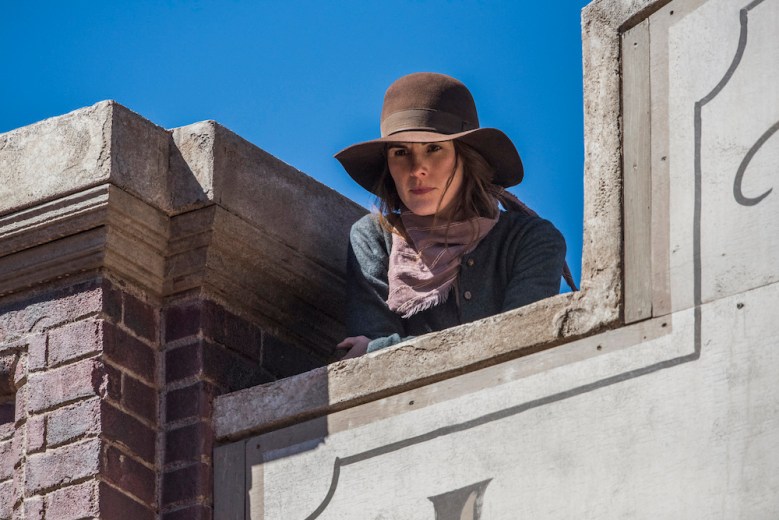 All in all, “Godless” is a relatively straightforward western — and proud of it. Scott Frank’s limited series wears its emotions on its dirty, tattered sleeve, and the nearly feature-length finale wraps things up in a way that’s satisfying in the specifics more so than any big surprises.

In comforting fashion, Frank’s western abides by the formulas and format of the classics and draws to mind the great miniseries of yesteryear (namely, “Lonesome Dove”). But what elevates “Godless” beyond imitation are its subtle yet strong modern touches.

The simple image of a dozen women with guns drawn — shooting from rooftops, store windows, and behind overturned tables — is powerful. From the moment a random member of Frank Griffin’s posse says, “Hello ladies,” and Merritt Wever’s Mary Agnes shoots him right off his horse, it’s clear this moment is not one to end peacefully. The series doesn’t go out of its way to emphasize these widows (and their general badassery) over its central story, but they’re nonetheless an integral and extremely satisfying part of it.

(Is there a better western to be made that’s only about a town full of women forced to defend it against an army of wretched men? Perhaps. Probably, even. But “Godless” didn’t merely use its ladies for window dressing. Their stories were intriguing and rarely felt like background — until the ending moved out of town. Mary Agnes will not soon be forgotten, and if Netflix deems a sequel necessary, she’d make a fantastic central figure.)

There are more moments than just the ones from the gunfight to appreciate, so let’s dig into what made the final episode of “Godless” so damn satisfying (plus a few additional thoughts from the previous six episodes, as well). Perhaps the most original aspect of “Godless” is that Roy Goode, played by the oft-abused Jack O’Connell, wasn’t given one definitive reason to turn on his makeshift pappy, Frank Griffin (Jeff Daniels). His revenge wasn’t motivated by a singular betrayal, or Frank crossing just one line. If anything, Frank had far more reason to be angry at Roy than Roy had to be angry at him.

Though there’s no doubt throughout the series that these men are on a collision course, the slow unveiling of their history didn’t expose the typical break between men that usually accompanies a revenge tale between black and white hats. Instead, it was Roy’s slow transition to adulthood and an even slower understanding of who he was compared to Frank.

The defining moment seemed to come when Roy finds out his brother is alive. After being left with Sister Lucy Cole (Marceline Hugot) by his brother, Roy stays as long as he can. Then he loses hope: He thinks his brother is dead, so he leaves and got together with Frank. One misguided act — stealing Frank’s horse — leads to another and another, until he’s part of the worst posse in New Mexico.

Moments arise during his time with Frank in which Roy suspects he might be running with the wrong crowd, but it’s not until he returns to Sister Lucy’s and finds a letter waiting for him that he realizes he has to leave the gang. His brother is alive. Frank gave him a new family, but his real family is still out there.

Before Frank burned down the city of Creede, Roy says he “couldn’t kill” Frank. He just kept pestering him from a distance. But after Creede, he knew what he had to do and planned the train robbery to finish things. Obviously, Frank doesn’t take too kindly to Roy heisting his heists, but a man like Frank doesn’t burn down a town and hang its children over a lost bag of cash. He has principles, and he only abandons them (to such a violent extreme) when he’s in pain — internal (losing his son) and external (that bullet wound in his arm). (More on Frank in a moment.)

So why did Roy need to kill Frank? In part, because there was no way around it. The code between men at the time demanded they face each other. That’s why Frank emerged from the shootout unscathed. That’s why (in part) he doesn’t draw his weapon on the women, and he turns up his hand at Mary and Alice (Michelle Dockery) when they look down on him, guns drawn, from the rooftop. Frank knows who he has to face, and as soon as Roy arrives, he splits because he knows Roy will find him.

But Roy’s revenge was driven by more than obligation. Frank turned him into someone he hated. Roy did things under the guidance of his pappy that he’s ashamed of, and he rightly blamed Frank for his part in that shame — as much as any child can blame their parent for turning them into who they are. Moreso, Roy recognizes how Frank took advantage of his youthful rage. Frank, a bad man through and through, may not have known better, but “Godless” made clear that Frank knew better than to do the worst deeds of his life. The Ideal and Idealistic Villainy of Jeff Daniels

Frank is a complicated man. As a preacher and a murderer, he’s This leads us to Frank Griffin’s two most pivotal scenes: his stay at the house full of the infected and the massacre at the Hobbs’ home.

First, Frank takes a surprisingly kind turn to take care of a bunch of people dying — or already dead – from smallpox. He and his sons dig graves for those already gone, makes food for the living, tends to their animals, and cleans up the place as best he can before it’s time to go. By the time Bill McNue (Scoot McNairy) arrives, hot on Frank’s trail, all that’s left are freshly buried bodies with half-crosses sticking up from the ground around them.

This digression doesn’t sit well with Frank’s gang. They don’t want to get sick, and they don’t want Frank to get sick. He “knows” he won’t, seeing how he’s seen his death and “this ain’t it,” but the time taken to give kindness to these dying souls is antithetical to the death they typically inflict on anyone who gets in their way. Little do they know Frank’s M.O. isn’t wrath and vengeance. It’s self-interest.

This Article is related to: Television and tagged Godless, Jeff Daniels, Netflix