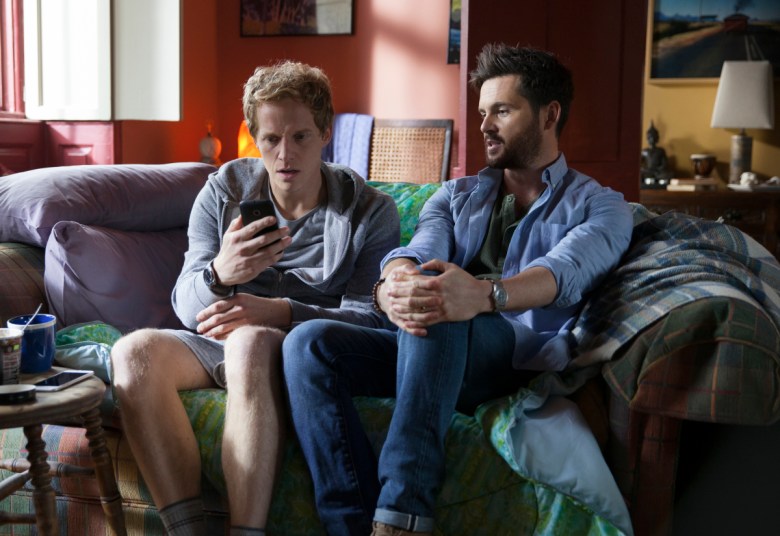 There’s a frustrating character type that pops up on TV from time to time: bad friends. While friendships filled with strife and conflict certainly exist, some writers rely on “good” friends betraying each other’s trust to create drama, leaving both an icky feeling in viewers’ minds and a lack of resonance between the characters and their audience. Of late, “Friends From College,” “Flaked,” and “I’m Dying Up Here” have all offered up toxic friendships meant to be seen as traditional, and now, despite the best efforts of a game cast, “Ill Behaviour” has joined the club.

Written by “Peep Show” co-creator Sam Bain, “Ill Behaviour” was originally released in the U.K. as three episodes, an hour each, but Showtime has divvied them up into six half-hour entries to better fit both the minimum episode count and genre/length associations in America. The edits don’t seem to disrupt the flow, but they could give audiences additional opportunities to bail on a series that’s never quite as good as it should be.

Meet Joel. Played by the affable Chris Geere, Joel proves distinctly unlikable, no matter what ready excuse he trots out for his ugly behavior. Recently divorced and told by his best friends that no one ever liked his ex-wife, Joel is lost. He inherits a lot of money in the split, but doesn’t know what to do with it and falls hard for the first person he dates.

That would be Nadia. Played by the wry Lizzy Caplan, Nadia gives as many shits as Joel has wives (zing!) and is more than eager to cut to the chase — the chase being drinks, drugs, sex, or any stimulant that distracts from reality. That she’s a doctor only adds to her mystery, but while Caplan helps make Nadia a welcome wit and grounded party animal, her backstory never gets as fleshed out as it deserves. Though the two come together independent of anyone else, Joel soon comes to need Nadia for more than just her (somewhat abusive) company: He needs a doctor to help his friend, Charlie (Tom Riley), but not in any sanctioned manner. You see, Charlie has recently been diagnosed with cancer and is refusing to go through chemotherapy. Instead, the husband and father of two wants to use homeopathic alternative medicines to fix himself up. Despite the medical community insisting he’d be cured if he just took the chemo, Charlie refuses.

From there, Joel and Nadia — with the help from Charlie and Joel’s close friend Tess (Jessica Regan) — take things into their own hands. Without spoiling exactly what happens, it’s safe to say they go above and beyond the laws of friendship and polite society to try to save Charlie’s life, whether he wants to be saved or not.

Such a conflict invites a slew of fascinating moral questions: How far should a friend go to help another friend? What’s the line between open-minded and suicidal? Who gets to set that line? Not only is there a butting of the heads about medical best practices, but human rights. Are Joel, Tess, and Nadia saving Charlie’s life or violating his rights? Are they psychotic martyrs, knowing their actions will save someone else but destroy their own lives, or selfish saboteurs who just want to keep their friend close to them? “Ill Behaviour” sadly dodges a lot of these difficult topics in favor of easy love triangles, repetitious bickering, and extreme antics. Joel’s motivations are mapped out in nearly contradictory fashion: On the one hand, we’re intended to believe he really does love Charlie and wants to save him. On the other, he does some despicable things purely out of self-interest. It’s not that a character like Joel can’t be complex — a bad guy doing a good thing — it’s that he’s meant to be good at heart and that’s never driven home. There’s no connection between Joel and the audience, or at least not long enough for viewers to hope he makes it out of all this as well as Charlie does. Geere does his best with a thankless role, but not even his precise comic talents can redeem the character.

Others suffer from similarly stunted growth and are equally unsalvageable. Riley snags the most complete character, but that’s simply because he’s the straight man. Charlie’s wholesome resilience doesn’t falter, and his devout code would be more admirable if it was a bit more interesting. (Riley, however, is very interesting, giving a committed turn despite being asked to recite the same lines over and over again.) Tess ends up as an afterthought. Of the two main arcs given to her character, only one gets any sort of resolution, and it’s not particularly satisfying.

Perhaps “Ill Behaviour” will resonate more with viewers whose closest friends aren’t particularly good at the whole friendship thing. For all of Joel’s reminiscing about the good old days, it never feels like these three should be particularly close. They lie to each other, deceive each other, and hurt each other — all of which they do rather easily, and, given their inherent and obvious flaws, there’s a disconnect between the lengths to which these friends go for each other and how the audience feels toward them.

But hey, if you want to see a shirtless Chris Geere fire a crossbow from the roof of a castle, no one would dare discourage that. (Really. It’s great.)