Greta Gerwig has been preparing for this moment for a long time. Here's the path she took to deliver her assured directorial debut. 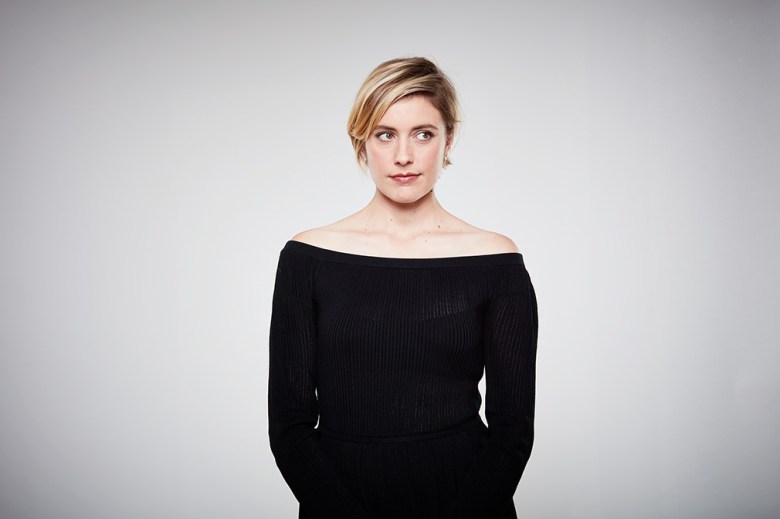 (Editor’s Note: IndieWire is highlighting the best of our 2018 Oscar coverage, with support from Apple iTunes. Watch “Lady Bird” and other contenders at iTunes.com/Oscars.)

Greta Gerwig has a story about the moment she knew she would become a director. Shortly after she starred in and co-wrote “Frances Ha” with Noah Baumbach, she met “Orlando” director Sally Potter at a party. Gerwig cornered Potter, to pick her brain.

“I do that with people I admire,” Gerwig said. “I was writing a lot. I was asking her about how she does what she does. Does she do it first thing in the morning in longhand, or many computer drafts? I was being nerdy and needy, and she was answering and being very kind.

‘I’m part gypsy and it’s written all over you! The word is dor, and it means yearning that’s bigger than your body and you have it and you need to do that.’ She released me, and I felt, ‘Oh, my god!’ It truly lodged somewhere in me.”

It was a life changer for Gerwig, but it’s not the only one. While “Lady Bird” has critics swooning over her directing debut, assigning her rookie status is something of a false equivalency. She went to Barnard, not film school, but she’s been writing and acting in films for 11 years. She learned on the job via multiple collaborators, from Joe Swanberg and Mike Mills to Rebecca Miller and her partner, Noah Baumbach.

“It makes sense to me, looking back,” she told me at the Telluride Film Festival, “how I was learning and what I was doing. When I finished the script for this movie, I had a moment where I thought, ‘I know a lot of great directors and I could give it to them and they’d take good care of it — make something that I would be proud of. But I just knew that if I didn’t do it, I would regret it forever, even if I made a less-great movie than they would have.”

There’s nothing “less” about “Lady Bird;” her first film is a full-blown triumph (Metascore: 93) that played well at the fall festivals; it opens today, and will continue to resonate as the best mother-daughter dramedy since Oscar-winner “Terms of Endearment.”

Much like Best Picture contender “Boyhood,” “Lady Bird” has universal appeal. As A24 did with “Moonlight” last year, they could take it to major Oscar wins. “Lady Bird” marks a high achievement not only as a superb, exactingly wrought screenplay but a fully realized piece of cinema. Clearly, Gerwig has been preparing to take the directing reins her whole life. Here are seven more key learning moments that led Gerwig to “Lady Bird.”

Like the title character, Gerwig was a full-blown theater geek in Sacramento, but she didn’t wait for high school. “I was deeply involved in theater from the time I was younger,” she said. “It was not a thing I came to.” Gerwig has continued indulging her love of making and watching theater in New York and London ever since. In May 2014, Gerwig made her professional stage debut in Penelope Skinner’s “The Village Bike” at the Lucille Lortel Theater in New York, for which she received an Outer Critics Circle Award nomination. Gerwig started off making micro-budget features with a minimal improvisational aesthetic. From her earliest efforts like Joe Swanberg’s “Hannah Takes the Stairs” (2007), she shared writing credit with fellow improvisers and future directors Andrew Bujalski, Ry Russo-Young, and Mark Duplass. From that ensemble, she popped with her smart and distinctive voice. Swanberg went on to share director credit with her on “Nights and Weekends” (2008).

“We both acted in it, devised the story, and figured out how to tell it,” Gerwig wrote in an email. “It was similar to how we had shot ‘Hannah’: i.e. nothing was scripted, but the outline of the film and the characters were clear. The actual dialogue was completely improvised. It was a particular way that he had figured out that he liked making movies, and I was co-everything on it. It was definitely a step towards authorship, but very different than the movies that I made later. The goals of the film were different and the methods were different. In terms of working out how to construct something, though, it was very useful.”

Soon Gerwig was discovered by other filmmakers, from Alison Bagnall, for whom she played a vengeful wife angry at her unfaithful husband in “The Dish & the Spoon” (2011) — to Noah Baumbach, who cast her opposite Ben Stiller and Jennifer Jason Leigh in his relationship comedy “Greenberg” (2010). Gerwig and Baumbach became partners and collaborators, and co-wrote the black-and-white New York dramedy “Frances Ha” (Metascore: 82), which Baumbach directed. The New Wave homage seemed different from his other work, with a strong woman’s voice at its center. “Noah is incredibly rigorous with his scripts,” she said. “I felt very deeply when Noah and I wrote ‘Frances Ha.’ It was me, and it was not. What’s funny is, I’ve never been a modern dancer, none of these things happened. The love story between the friend and what that story became was beyond autobiography.” When Gerwig latches onto a story, she develops what “Wild” memoirist Cheryl Strayed terms “a second heart,” she said: “It starts growing in your body and you feel it almost like a physical thing, it’s terrifying. You have to start honoring it and find time for it. Either you have to get it out of your body or it will kill you. And ‘Frances Ha’ felt to me like the first time I had that sense.”

Five years ago, “Frances Ha” first fulfilled Gerwig’s long-held fantasy, nurtured since  Barnard, of coming to the Telluride Film Festival.  “I knew people who had done the student symposium,” she said, “and talked about how they had met cinema luminaries on street who would talk to you, how you’d watch movies all the time, and rare prints. ‘Frances Ha’ was the first thing I had cowritten that felt like a step toward the kind of filmmaking and writing I wanted to be doing. It felt like a very big piece of my heart when it was here, the first time we had seen it with an audience.” Gerwig landed a small role in French ’90s rave music movie “Eden” (Metascore: 82) directed by Mia Hanson-Love. “Watching her and respecting her cinema and world-building abilities,” Gerwig said, “was a big part of my becoming a director.” Writing ensemble comedy “Mistress America” with Baumbach was a completely different experience, Gerwig admitted: “It was a different way to write a song — I think of them as songs. It’s not a heart growing inside my body, but it was about the complete joy of the form. I felt, ‘I want to play with language, I want to see, can we have eight people talking in a room at once and not cut?’ I was excited by the form.”

Ahead of Sundance, Fox Searchlight picked up the comedy starring Gerwig’s enchanting screwball heroine, capable of such one-liners as: “Sometimes I think I’m a genius, and I wish I could fast forward to the time when everyone knows it,” and, “There’s nothing I don’t know about myself — that’s why I can’t do therapy.”

While writer-director Woody Allen created comedies as vehicles for his muses Diane Keaton and Mia Farrow, Baumbauch and Gerwig co-created a movie featuring her clear, identifiable voice. And again, the central relationship was between two women: Lonely New York college freshman Tracy (Lola Kirke) is taken in by her almost-stepsister Brooke (Gerwig), a dangerously entertaining urban sophisticate who draws her into her crazy schemes with chaotic results. Starring in writer-director Rebecca Miller’s fifth feature, “Maggie’s Plan,” helped Gerwig take the next step. “It’s no accident that I worked with her and turned around and made my film,” she said. “I already had a draft by then. Being with her gave me confidence.”

Shooting the sex scenes in the New York triangle romance co-starring Ethan Hawke and Julianne Moore helped her handle ones in “Lady Bird,” as well as a stage play where she had to do sex scenes eight days a week. “I’m sensitive, I know what it’s like,” she said. “When I did the play, the director was so clinical, it’s like a dance. So I was very clinical with my actors about what I wanted — that blocking and care were very important.” By 2013, Gerwig had thrown all her ideas into a 350-page first draft. She then spent years whittling it down, slowly and deliberately.

“I tend to overwrite,” she said during a Telluride Conversation with Rebecca Miller. “I write and write and write. To me, it’s about taking things away. I read a lot out loud to myself. It’s almost a rhythmic thing, something will catch wrong, you go back and rewrite it. Writing takes a long time; it’s that process of knowing what I have on the page is what I want in the movie. The movie you see is pretty nearly how it read. I think about writing every single day. When I’m working on it and it’s not done, it’s bad. It’s humbling every day to be confronted with the thing that’s not written. It takes more courage than you would think. You have to let go of your critical mind.”

When Gerwig’s mother saw the film, “My mom’s comment was, ‘You wish I would give you the silent treatment!’ She never gave me the treatment. I never made anyone call me by a name I didn’t have. I never jumped out of a moving car. No, I didn’t have red hair.”

What Gerwig did have was that lesser-than feeling, she said. “I always had a sense of ‘it’s not enough’ or ‘I’m not right,’ of not wearing the right things. Particularly for girls, they attach a lot of their self worth to their family’s economic situation, because they judge each other on how much they spent on their clothes. With Lady Bird, it’s also that she has so much, and she can’t see what she has.”

During the casting process, Gerwig uses her ear as much as her eyes. She met Ronan at Toronto in 2015; as they read through the script, she knew Ronan was right. “With auditions, I almost listen more than I’m looking,” she said. “It’s like a musician playing the song correctly or even better, doing it better than you expected.” With “Lady Bird,” the 34-year-old filmmaker returned to Telluride after showing the film on an Avid to small groups of trusted friends. At subsequent festivals and screenings, audiences have been sharing their stories. “It’s been incredibly moving having people relate to it,” she said. “And more than anything, it’s women who come up to me and tell me about their daughters. They say, ‘I’ve been that daughter, and I’ve been that mother, and I understand.’ Oh God, mothers are all trying so hard. It’s what’s so difficult about being a mother: It’s an endless series of knowing your daughter doesn’t get it until that moment’s gone.”

Watch the “Lady Bird” trailer below, courtesy of iTunes: