Sam Esmail and Tod Campbell give IndieWire all the behind-the-scenes details on what made the show's most groundbreaking episode to date possible. 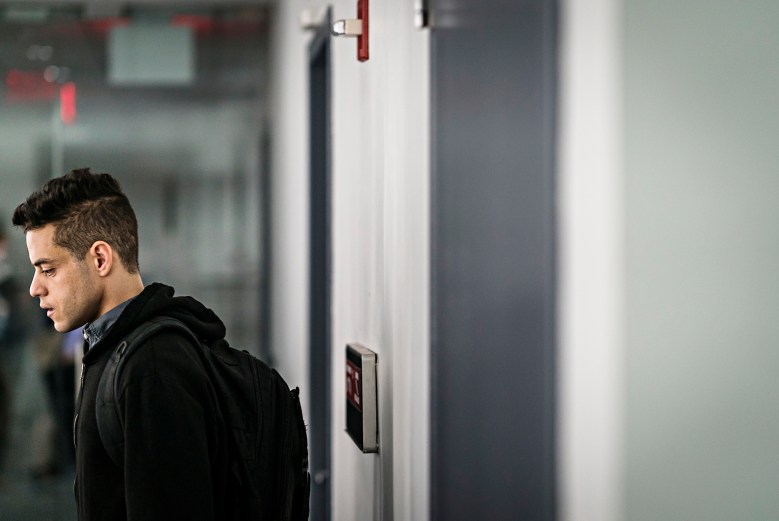 Any fan of “Mr. Robot” knows that the show loves its long takes. But Season 3, Episode 5, “eps3.4_runtime-err0r.r00,” took it to a whole new level. For approximately 42 uninterrupted minutes, we follow first Elliot (Rami Malek), then Angela (Portia Doubleday), through the offices of E Corp as chaos descends following a riot staged by F Society — one seamless narrative experience unlike anything we’ve seen before on television.

According to director of photography Tod Campbell (who was nominated for an Emmy for his work on “Mr. Robot” this year), “a lot more money went to this episode. We shot for more time, more hours to complete it than we did probably any other episode.”

But it was worth it. Before talking with director and showrunner Sam Esmail and Campbell about the filming of this episode, it wasn’t clear whether or not they’d be open to discussing production details, since they would expose the fact that while it might look like one long take, “eps3.4_runtime-err0r.r00” (spoiler alert) was anything but.

As seen below, though, they didn’t hesitate. “I’m very outspoken about the fact that this was a collection of shots,” Esmail said. “It’s just about having that seamless feel of a real-time experience.”

Esmail added that “I don’t want the audience to fixate on the technical achievements or lack thereof of what we’re doing. Because if you start thinking if somebody watching this episode is starting to think about that, then I think we’re lost and I think that the storytelling is gonna suffer if people start to intellectualize it.”

However, once you’ve had the chance to experience it for yourself, “eps3.4_runtime-err0r.r00” is an achievement worth celebrating, and below Esmail and Campbell reveal why the long-take approach made sense for the story, who the heroes were on set, and just how many takes it took to make this possible.

“Oh God, That’s So Difficult to Do”

According to Esmail, the choice to make this one continuous shot came directly from the initial idea to do the episode as a “24”-esque real-time experience. “We knew that real-time was definitely the way to go for Episode 5 but that doesn’t necessarily mean one scene or one take,” he told IndieWire.

However, as Esmail and Campbell began discussing it, “it just became very clear that it felt like it needed to be seamless. That it wasn’t enough that it was just real-time action, but that the experience to the viewer should feel seamless, especially while switching from Elliot’s point of view to another,” Esmail said.

Campbell’s initial reaction to the idea, he said, was “‘Oh god, that’s so difficult to do.’ Then I was coming up with ideas and started getting excited about it.”

So, before production even began on Season 3, Esmail, Campbell, first assistant director Justin Ritson, production designer Anastasia White, and steadicam operator Aaron Medick began planning how the episode would work. “We literally made a map of the entire thing,” Campbell said. “From the very first conversation, I think we were all excited but also a little nervous about being able to pull off this type of thing for television. I mean, it costs a lot of money, it takes a lot of time.”

So much time, in fact, that when production began on Season 3, a sequence from Episode 5 was the first thing they shot. “We’re back from Season 2, we’ve got different crew members and all this stuff, and here we go, we’re gonna do this giant one-er,” Campbell said. “It was just like, ‘Oh my God, I can’t believe that’s what we’re starting with.'”

Cutting Without Showing It According to Campbell, that first long shot — one of the first sequences of the episode, in which Elliot exits the elevator and goes to his cubicle — took about eight or nine hours to capture, with them ultimately filming 24 takes.

This was the most any shot required; most of the others only took about 15-17 takes. “Sam’s a perfectionist,” Campbell said. “I mean, good Lord, if one extra does something a little weird, it’s back to one and you’re doing it all over again.”

And it was only one piece of the puzzle. Going in, the team knew it would be flat-out impossible to actually film the entire episode as a long take, given everything that happens. (Campbell actually used the word “insane.”) So they initially broke it down into approximately 16 to 18 shots, though the number increased during production, “once we got in the stairwells and stuff like that,” Campbell said.

An additional production hurdle Campbell mentioned: “It was just one floor in E Corp. We could only have one floor. So as Elliot and Angela change floors, we had to go in, literally tear down walls, and rebuild the entire office floor for when they come off the elevator.”

This increased the number of hidden cuts, or “stitches,” that were used to connect all the pieces. A USA representative has confirmed that in total, there were 31 used in the episode.

“I can’t tell you the number of conversations between myself and Justin, the first AD, of how to create the stitch so that visual effects could take it and then make it truly seamless,” Campbell said. “I mean, oh my God, we could easily spend an hour talking about how to stitch. It was crazy, it really was.”

To ensure that the transitions were, in fact, invisible on screen, Campbell worked with the visual effects team to match the last frames of each shot with the first frame of the next, using a monitor on set. “You kind of blend them together on a little monitor until it’s perfect. Or as perfect as you can get it.”

Esmail wasn’t sure if the experience of shooting Episode 5 would have been different had they done every shot in the same two-week shooting block, as opposed to broken up across the entire production schedule. The show has a history of shooting out of order, something enabled by the fact that for the last two seasons, Esmail has directed every episode himself.

“The cast treats it the way I treat it, in this sort of feature film mindset,” he said, “And I’m always there to be their guide and their compass. Honestly, it was good to break from doing these runners because as excited as everybody is on that day, to try and go through 24 takes of a shot, I think it would have been actually more grueling to have to do that every day for two weeks.”

“When I read this episode, I was like, ‘Jesus, Sam. Did you have to put it all in an office?'” Campbell said. “It’s like white walls. That sucks for a cinematographer. You want to craft light, and white walls is the worst.”

“But then,” he added, “now that I’ve gotten through it and watched it, it actually was great because had there not been an evenness to the lighting, like you have in an office, that’s what allowed it to kind of work, for me. Otherwise, I don’t know what my approach would’ve been, if it would’ve been anywhere else other than that type of environment. That type of environment worked for us because we could kind of light everything from overhead and allow the camera to move around without too many problems.”

That’s not to say it was an easy time on set. Let’s take a moment to celebrate the hard-working “Mr. Robot” crew, who, when you hear Campbell describe the scene on set, seem to have the dexterity of ballerinas.

“Justin Ritson, the first AD, he’s got all these extras and we’re moving the camera 360 degrees. I’m dimming lights up and down so they don’t throw shadows on people’s faces when the camera whips around, sometimes the art department’s coming in there and they’re flying out cubicle walls so the camera can pan around. And before it comes all the way around, they have to put the wall back in — the camera doesn’t cut for those things,” he said. “It’s really, really, really, really tough.”

Even the most basic of things can become a major obstacle on set, such as the fact that many walls in the E Corp offices are made of glass. “They’re like a mirror, with the camera. You see reflections of everything behind camera. The boom operator has to lay down on the floor as the camera pans over him and then pop back up and get the microphone back over the camera to grab the line.

“They’re all heroes,” he added. “That’s a great thing about these filmmakers and these technicians. They get so excited. I think a lot of times they work on shows, ‘Homeland’ or whatever, that are pretty normal, but this is very, very challenging filmmaking. Everybody gets behind it, supports it, and gets excited about it.”

Esmail also noted the excitement on set. “Every day that we were shooting Episode 5, instead of being fearful that we were gonna fuck it up in some way, everyone came excited. And that was awesome, that was just a pleasure to see. That the challenging stuff is what we show up for in an enthusiastic way, rather than being scared of it,” he said. For the record, when Esmail approaches each episode of “Mr. Robot,” he isn’t too concerned with how it will ultimately be presented on television. Or, in his words, “I’ll be honest with you — I don’t give a shit. I never think about that. I never think about how it’s going to air or what the parameters are. I really try and keep that out of the creative process, because at the end of the day it’s about telling the best story in the best way possible.”

In fact, when “Mr. Robot” went meta with a Season 2 episode that began as a ’90s sitcom throwback, Esmail gave star Rami Malik credit for the idea to incorporate real ’90s-era commercials into the initial airing, an idea which came about on a particularly surreal day for the show. “Weirdly, coincidentally, we were shooting the sitcom episode the day we found out we got nominated for the Emmy. So, this is a drama nominee for the Emmy and there’s Alf right there in the Corvette,” he said.

Esmail continued: “We were shooting it, and Rami walks over to me, and he’s like, ‘So I have this great idea. Why don’t we see if we can get some of our sponsors to bring up their old ’80s or ’90s commercials and fill those in the commercial place?’ And, I was like, that’s genius and our network executive happen to be on set there too. We pulled him over and he was thrilled and enthusiastic about it, and that’s how it happened. Those great ideas happened to be other people’s ideas. I tend to just stay in my office on the show.”

The decision to go commercial-free for its initial airing came after both the “Mr. Robot” team and USA Network were able to watch the episode: “I think we were all in consensus that really, the best experience for this episode was to watch it commercial-free and seamless,” Esmail said. (Acura was the presenting sponsor for Wednesday night’s premiere.)

The end result wasn’t just one of the most groundbreaking episodes of the series to date, but further proof to Esmail as to the quality of his team. “With this cast and this crew, I learn that every time I challenge them with a crazy notion or a crazy idea, they not only rise to the occasion but they just exceed expectations, and are game even more than I initially thought.”