In Season 3, Episode 8, “First Wife," Claire receives a rather chilly welcoming at the place she used to call home. 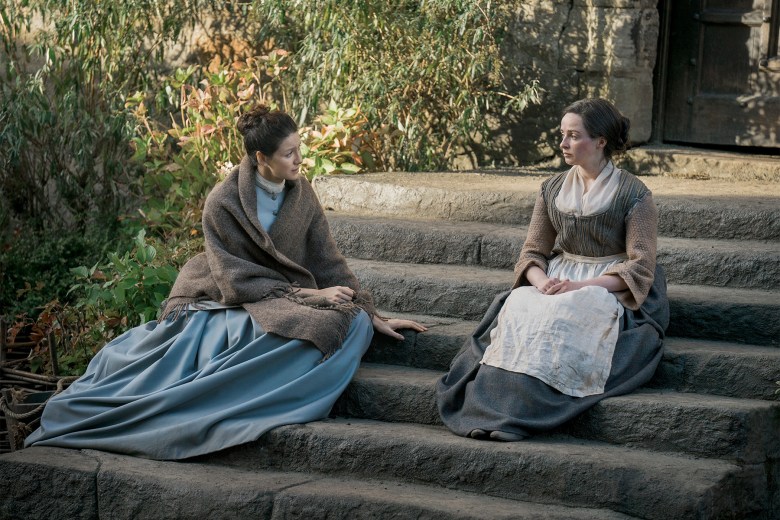 As predicted by the reveal of Jamie’s second wife at the end of the last episode, the newly reunited couple’s homecoming bliss at Lallybroch was short-lived to say the least — if you would call it bliss in the first place, that is. With Jenny and Ian ticked off at Claire and Jamie for lying to them and exposing their youngest child to boozy bootlegging, brothels and murder, there weren’t many pleasantries to be passed around. The reveal that Laoghaire (a.k.a. the girl who tried to have Claire murdered back in Season 1), was Jamie’s new wife obviously was never going to go over well, but it was an especially hard thing for Claire to accept, given how coldly everyone else was treating her.

It’s no wonder that she felt as though fleeing back to the rocks was the best course of action, despite how frustrating it was as a viewer to watch the character fail to listen to reason. Jamie, in fact, did not lie to her as she accused him of doing. He said he never loved anyone else and that holds true. Whether he was lying by omission is another thing altogether, but these two have agreed that they don’t have to share everything, only that what they share be true.

Laoghaire has always been jealous of Claire and wanted Jamie for herself, so her actions following Claire’s return were predictable at best. We can assume that if she meant to shoot anyone in that scene it was Claire and not Jamie, although that moment in itself is another departure from the book (more on that below). Still, Jamie’s survival thanks to the modern penicillin that Claire brought back meant that his second wife was still able to file grievances, and as the duo was unable to firmly prove that Laoghaire was the one who shot him meant a large sum of money coming from Jamie’s pockets. Given that he raised Laoghaire’s daughters as his own it would be pretty anti-Jamie to not support the girls at this point, but in order for the story to move forward a legally binding payment perhaps made the most sense. At any rate, the payment was an excuse for Claire and Jamie to move beyond Lallybroch and back into action, where the real stories in “Outlander” take place. Thanks to the flashback scene early on in the episode, viewers learned that there was indeed a treasure on the mysterious island that Jamie escaped to while in prison, and that the treasure was more than enough to support Jenny and Ian while paying off an angry wife. With Jamie injured, of course, it was young Ian who had to go with them to secure that money, and as a result, we were inevitably waiting for something to go wrong. Wrong it went when a ship turned up and kidnapped the boy, essentially proving that Claire and Jamie are not as great of parents as they think are. If Jenny was devastated before, that’s nothing compared to how she’s going to feel now that her babe is gone.

Speaking of Jenny, she was the only one not completely accepting Claire back with open arms, given how devastated Jamie was without her. Jamie’s explanation of why Jenny couldn’t learn the whole truth about where Claire had been seemed rather narrow-minded of him; after all, Jenny has handled more than her fair share of crap over the course of her life. Just because she’s never left the farm doesn’t mean she can’t accept the idea of time travel, especially when Jamie happens to have photos of his adult daughter that could serve as proof.

At any rate, Claire realized she’d have to give some semblance of the truth to her sister-in-law in order to start smoothing things over as the new “stray” that Jamie had brought home, which went a long way in beginning to repair their relationship. We’ll see how those reparations go once Jenny realizes her baby has been kidnapped, of course.

Claire questioning whether she and Jamie were meant to be together at this point seems a little far-fetched. She traveled centuries to be with him supposedly knowing full well how hard the life in store for them would be, but now it seems as though she was completely blinded by the idea of a reunion and failed to think about any of the logistics. Of course, the people who love Jamie would be suspicious of her return — why expect anything else? Jamie is a law-breaker, so of course there were major repercussions there as well. Even if Claire didn’t know the extent of the bootlegging, she certainly knew that he was printing illegal literature in the print shop and that he hadn’t just settled down at Lallybroch. Expecting the two of them to do so was always going to be a pipedream. Okay, so, Claire dyed her hair and Jamie needs glasses, but how is it that none of the characters have really aged over the past 20 years? Where are the grey hairs, missing teeth, and wrinkles that come with such a passage of time? Perhaps a little more of the show’s budget should have been invested in makeup given the time gap between seasons — in the book, it was striking how little Claire had actually aged compared to everyone else who didn’t have access to immunizations, clean showers and toothpaste, and it resulted in even more of those “witch” rumors once she actually returned. That contrast has been completely lost here. Speaking of…

Where to start with some of the episode’s departures from Diana Gabaldon’s third novel in the series, “Voyager?” While there weren’t as many as in the previous two weeks (which skipped a lot of backstory in order to get to the sea-faring adventure Claire and Jamie are now destined to go on), there were certainly a few.

Claire did not flee Lallybroch at Jenny’s urging, for one, meaning that the scene in which Laoghaire shot Jamie happened in front of Claire and raised questions to the legal validity of the event. The entire question of young Ian’s punishment was another departure; either the producers decided that showing Jamie whipping a boy was too graphic for television (hard to believe with this show) or they wanted to be more politically correct; either way that scene was a heavy one in the book that made both parties bond with each other even more while forcing more responsibility on them.

Lastly, Claire’s reception at Lallybroch wasn’t warm by any means, but it was a lot warmer than the show made it out to be. The children still called her “Aunty,” for example, and even Jenny appeared to accept her return at the outset; that’s what made her summoning Laoghaire that much more of a betrayal when it actually happened.

As it stands, everything Jenny did was completely expected and that’s a shame. Her relationship with Claire has always been one of our favorites.

Next week: Claire and Jamie head to the West Indies. “Outlander” airs Sundays at 8 p.m. on Starz and on W Network in Canada.