How Del Toro and his team created a romantic world shaped by water, color and movies that was the perfect container for an amphibian love story. 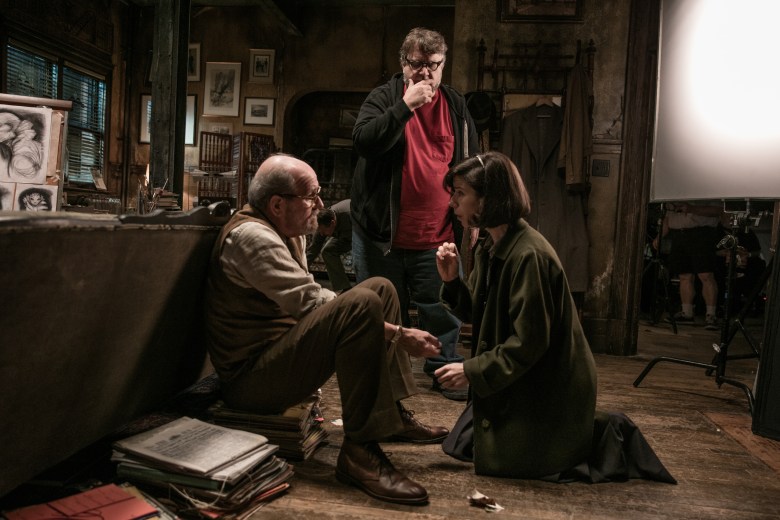 Guillermo del Toro on the set of “The Shape of Water” with Richard Jenkins and Sally Hawkins.

After a decade of bringing his personal style and sensibility to larger studio movies like “Crimson Peak,” “Pacific Rim,” and the “Hellboy” series, Guillermo del Toro wanted to return to the smaller, more personal fables he created with “The Devils’s Backbone” and “Pan’s Labyrinth.”

While Del Toro’s fables don’t have the elaborate action scenes and the sprawling canvases of his franchises, they are every bit as dependent upon his visual storytelling and world-building skills. To make “Shape of Water,” del Toro put up $100,000-plus of his own money and, with a small team of collaborators, designed the world of his amphibian love story before pitching it to financiers.

“This is the reverse of what I did on ‘Pan’s Labyrinth,’” said del Toro. “Instead of pitching for the three years, trying to find the money, I developed for about two years the look of the movie so that when I pitched it, they knew the story. I [could] take them beat by beat, and they could see the world, and most important they could see the creature.”

Building Around a Creature For a love story, in which a mute woman, Elisa (Sally Hawkins) falls in love with the amphibian monster (Doug Jones) at the military lab she cleans at night, del Toro not only wanted to show his potential financiers the creature itself, but also Elisa’s romantic world in which this love story made movie-logic sense.

“Image we are running a zoo, so you are creating a habit for the creature,” said del Toro. “The movie is a habitat. If you see the design globally, the design of a movie is like a bullseye, the center of the bullseye is the creature.”

Del Toro would spend two years sketching the designs for his amphibian monster, which would then take another year to execute. However, the film’s main locations would be designed around the monster, creating a backdrop in which the romantic fable was believable, but told in visual, lyrical way. “The Shape of Water” was originally conceived as a black-and-white film. But once del Toro saw it as a color film, he created a palette that served as an important storytelling device. Red was used sparingly to hit notes of love and cinema, while Elisa’s apartment — housed above a movie theater — would be a water-like habitat for the creature. (Cinematographer Dan Laustsen maintained the original concept’s shadowy “Twilight Zone” look.)

“Her apartment is art directed and painted and textured to look underwater, perennially,” said del Toro. “Her apartment is always in cold light, blue and cyan, water stains all over the place. T he other apartment and the other characters’ houses are color coded in amber and yellow daylight colors.”

Costume designer Luis Sequeira needed to make sure those warm tones would be an unwelcoming contrast to the coolish colors of Elisa’s water-themed world. “We viewed that orange as an ugly ‘60s look [the film is set in 1962] and that’s how I’d dress the men as well,” said Sequeira. “We thought of the somewhat monochromatic color palette in terms of these shifts and contrasts between the worlds.” The color green also played an important role in the film, as it represented an unwelcoming, unromantic future as seen in the lab, cars and Jello gelatin. In designing the creature, del Toro wanted it to have every color of the film except green; like Elisa, he represented the past. This green world of the lab presented a challenge for Sequoira and production designer Paul D. Austerberry (who based his design of the lab on the Brutalist concrete style prevalent in ’60s institutional architecture); this alienating setting would also be where Eliza and the creature first meet and fall in love.

“I wanted the lab to contrast with this very romantic space where their love blossoms [Elisa’s apartment],” said Austerberry. “For the tank room [where the creature is held captive and Elisa first interacts with him], it could have been sterile. But we decided to go with this industrial, rusty, steamy environment.”

Sequoira complemented the wet and (literally) steamy set by ensuring that Elisa and her co-workers’ cleaning uniforms fit the lab palette while also popping against the colors of the creature. The costumer tested numerous subtle variations in the uniform fabric –— warmer, dimmer, brighter — against Lausten’s lighting and Austerberry’s sets to make sure he found just the right combination to bring the lovers together. Although Elisa doesn’t fit into the military lab and future-leaning world she inhabits, it was important for del Toro that his mute heroine wasn’t seen as a miserable. “This is not a character that is lonely,” said del Toro. “I want her to have a modest but very nice life — a neighbor who loves her [Richard Jenkins], a good friend at work [Octavia Spencer]. When you introduce a character, where he or she lives, you are telling the audience what their life is.”

According to Austerberry, del Toro wrote “Shape of Water” knowing that Toronto’s Massey Hall would be the basis of Elisa’s home. In love with the building’s 1890s doorways and staircases, del Toro reimagined the old music hall as having been converted into movie theater in the 1920s — a conversion he also imagined turning a large office space above the theater into Giles (Jenkins) and Elisa’s apartments. Del Toro filled his and co-writer Vanesa Taylor’s script with little details about Elisa’s home, like the light coming through the floorboards emanating from the theater below, which served as the starting point for Austerberry to design her magical world.

“The fact that Elisa lives above a theater and all day long and all night long there’s light, and voices and music from the movies below, tells you how she thinks,” said del Toro.

Austerberry designed the apartment as if little had been altered since the 1920s conversion, rooting the character in a different era. “Elisa watched a lot of these old movies, so in my process I thought of her as the first vintage clothes collector,” said Sequeira. “She lived in this fairytale of her own, which for me meant finding really interesting pieces, whether it was a cuff link or tie bar. It was all about trying to find interesting textures and details, like taking a piece of cloth I’d find and turn it into a Peter Pan cuffed blouse.”

Del Toro also brought in design details from old movies he loved. For example, he wanted to reference the beautiful arch window for 1948 film “The Red Shoes.” This film reference made Austerberry imagine a once-grand room that might have been above the music hall, before being split into the two apartments where Giles and Elisa now lived. Del Toro loved this idea of how his two main human characters were two sides of one coin, as they share a single window between their two apartments.

“That window being split in half, they were somehow incomplete, but together they were a team,” said Austerberry. “It was a very romantic notion that if the apartments were joined back together, that window would be made whole.” As with its aqua color color schemes, Elisa’s apartment would also need to be designed as a wet, welcoming world for the creature once she snuck him out of the lab. Del Toro and Austerberry gave themselves a backstory: There was once a fire and the damage to Elisa’s apartment was left untouched, while Giles’ apartment was renovated.

“The idea was that everything stayed as it was and aged so that the walls are decrepit,” said Austerberry. “There were all these leaks, dripping water everywhere. That room was actually shaped by water.”

The water shaping was emphasized by designing the room so it never appeared to have straight lines or right angles. Even Elisa’s one nice piece of furniture was a voluptuous, curve-shaped couch. The production designer built on the theme with handmade fish-scale wallpaper from the era, while his scenic artist painted a wall using colored plaster to look like the famous Japanese woodblock print “The Great Wave Off Kanagawa.”

“When figuring out the light from the movie theater below, I showed Guillermo how a lot of the old subfloors had these big gaps and that’s why you get that buckled floor from water damage,” said Austerberry. “Those gaps would allow us to have the light emanating from theater below so it looked like rippling water.” Shooting dry-for-wet on “The Shape of Water”

When the creature comes to Elisa’s home, Austerberry would also need to account for actual water. For the opening scene, in which the apartment was completely submerged in water, budgetary demands required the use of dry-for-wet techniques in which no water is actually used. All set dressing and actors would be suspended using wire — as if floating in water — and the room was filled with vapor atmosphere and caustic lighting, while large fans combined with slow-motion cinematography simulated the feel of objects moving in water.

Real water would also be used at times, especially in the bathroom where the creature lived in the bathtub. On the last day of shooting, the bathroom set would be submerged in a water tank for a key scene. Austerberry designed the sets using aluminum flats and epoxy paints, while his team constantly tested their materials, soaking them for days to ensure they wouldn’t dissolve or come apart in water.

Yet the biggest source of the film’s water-like flow was his director’s constantly moving camera. “I wanted to shoot like a musical, where the camera is fluid like water and the camera is roaming all the time,” said del Toro. “Not a single standing shot in the entire movie. I tried to do it in a classical way, like a Minnelli musical — dollies and cranes, rather than steadicams –— so that if you met a character, it felt like they [might] break into a song.”

This Article is related to: Awards and tagged Costume Design, Guillermo del Toro, production design, The Shape of Water, Toolkit, Top of the Line