Season 1 Episode 9, "Into the Forest I Go," is the end of one chapter, but teases a great deal more to come. 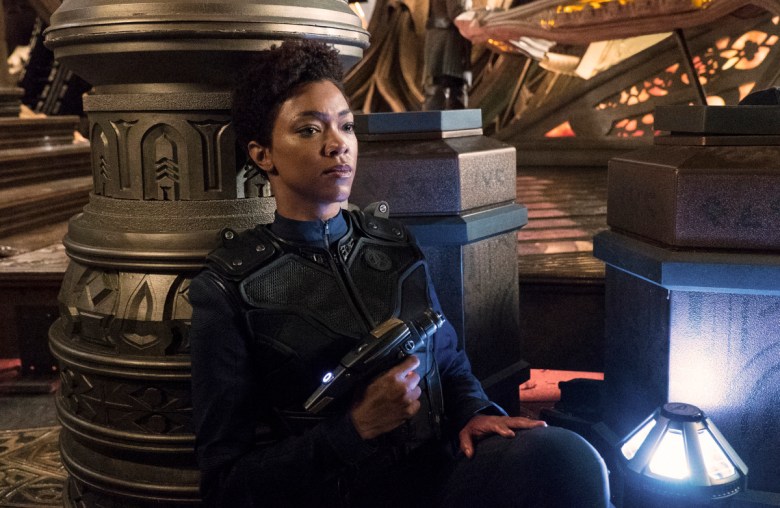 As the way we watch television changes, so does the way many TV shows define the release of episodes. That’s why we’re going to acknowledge that CBS All Access refers to the first nine episodes of “Star Trek: Discovery” Season 1 as “Chapter 1,” with the next batch, “Chapter 2,” set to premiere in January 2018.

How does that affect our experience watching the mid-season finale? Thanks to the ending, there’s a very clear endpoint for at least one storyline, but plenty more to be explored going forward. It’s always a fools’ game to look for complete answers at this point in the season — as “Discovery” is very much a modern version of “Star Trek,” which means it’s determined to keep us on our toes.

There’s good news and bad news. Good news: The Discovery officially took down the Ship of the Dead, a massive blow for the Klingons that includes the (theoretical) death of Kol. Plus, the peaceful planet of Pahvo is safe, Admiral Cornwell has been successfully rescued, and Klingon heavyweight L’Rell is in the brig. Oh, and the intimacy between Burnham and Tyler grew even deeper! That was all nice.

Bad news: The physical toll of over a hundred spore drive jumps has left Stamets both blind and incoherent. Tyler’s not doing so great either after confronting L’Rell. Oh, and the Discovery is totally lost in unknown territory. So, you know: There was a lot of kissing in this episode! And while the sweet embrace between Tyler and Burnham might have proven genuinely moving (the way she cups the back of his neck and he lets it happen, such a trusting and vulnerable moment for them both), it’s really that forceful smack on the lips between Stamets and Culber that resonates. Their deep commitment to each other makes it clear that this is a real, true love, one “Trek” has never introduced so early into a show before.

She might know Vulcan martial arts, but that still doesn’t mean it’s a good idea to challege the leader of the Klingon Empire (at this nascent stage) to a duel. Fortunately, while she didn’t best Kol, she did totally get to make a baller exit.

Lorca takes pride in the fact that Discovery was originally an exploratory vessel and is now more ready for war, which is very in character for him. However, it’s not very “Star Trek.” But Lorca has been operating a fascinating position as captain, leaving us doubting whether or not he’s the captain we really need in charge of the Discovery. Rebel With A Cause

Lorca’s still keeping his more unhinged characteristics under wraps here (though the slight flinch on Jason Isaacs’ face when Lorca finds out that Admiral Cornwell — who wants him removed from duty — is going to survive her time as a Klingon prisoner is quite telling). Thus, the fact that he’s now in an area of space that seems outside the realm of the Federation is fascinating, almost as fascinating as…

That Fan Theory About Tyler

While “Into the Forest I Go” did not confirm what many have suspected for several weeks now about Lieutenant Tyler’s origins, his PTSD-triggered flashes (if you freeze-frame through them) most definitely don’t disprove the theory that we will simply link to here, as opposed to explaining/essentially spoiling for those hoping to avoid.

Of course, the actual truth remains undefined, except of course for L’Rell’s promise of “soon.” It was an ominous statement made all the worse by the fact that we like Tyler so much. In Chapter 1, the two episodes that have let “Discovery” shine have featured Tyler prominently. It’d be a shame to lose his presence.

“You’re not just a scientist, you’re an explorer. You could have stayed in a lab on Earth, but you chose to go where no one has gone before.”
—Lorca

How nice it would be, to believe that this line was a genuine celebration of Stamets’ character, and that it wasn’t at all an attempt to manipulate a brilliant scientist fascinated by (pardon this) discovery into pushing himself beyond any natural limits.

Yet, unfortunately, given what we know about Lorca, he doesn’t seem like the kind of guy to let a person’s well-being stand between him and his desire to win the war against the Klingons. There’s an unfortunate issue where as interesting as the planet of Pahvo became during Episode 8, this viewer’s direct investment in its fate wasn’t on the same level as a threat against Earth or Vulcan. It’s good that this entire ecosystem devoted to creating harmony was able to maintain that, but “saving Pahvo” wasn’t quite the cathartic victory that it seems the show wanted it to be. “Discovery” has proven to be very good at showcasing its core characters, but creating connections with one-off characters and worlds has so far proven elusive.

But that feels like a nitpicky point, as opposed to more pressing issues. There are so many questions left to answer when it comes to “Discovery,” and while it’s built up its intimate ensemble there’s still an overwhelming desire to understand more. Which speaks to the show’s grasp on our attention, but also makes this episode less than satisfying.