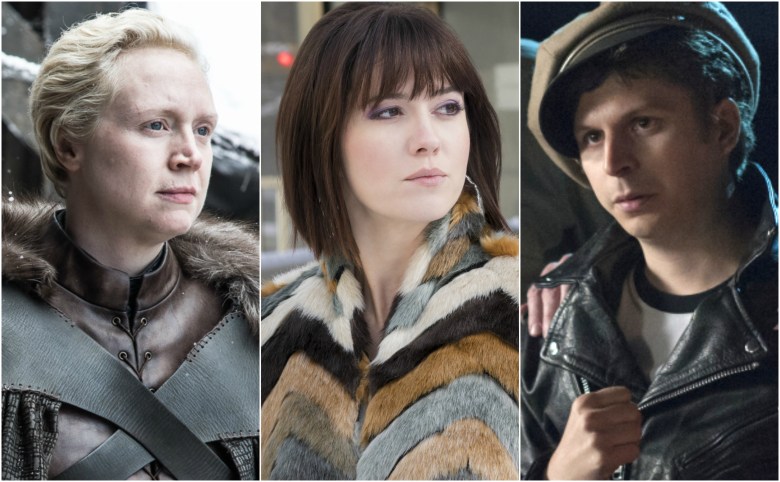 This week’s question: Which character(s) on a TV show that aired in 2017 deserves their own spinoff?

I would be down for a show built around Laura Dern’s one-episode role on “The Unbreakable Kimmy Schmidt” as Wendy Hebert, the flaky “mystery bitch” who wanted to marry Rev. Richard Wayne Gary Wayne (Jon Hamm). Mostly because Dern is the absolute shit and she should be doing more comedy. And secondly because this could be, as the theme song says, a fascinating transition from the lightly touched-upon trauma Kimmy (Ellie Kemper) endured at her kidnapper’s hand to a darker comedic exploration into the psyche of a woman who would not just fall for a predatory and manipulative serial abuser, but also make excuses for him. In this era, that needs to be looked at. Oh, and it would also allow for an expansion of the “30 Rock” universe and you know Liz Lemon fans want to go to there.

There is only one correct answer to this question, because I STILL HAVE SO MANY QUESTIONS ABOUT WALLY BRANDO. Like, you know, what? Huh? And really? And WHY? And most importantly — why was he only in one episode? It’s all so deeply tragic. But hopefully, one day someday, a grateful nation will be put out of its misery and given the answers David Lynch and Mark Frost cruelly denied us during “Twin Peaks: The Return.” So, as always, there are a variety of approaches to this. There are the kind of deep ensemble shows in which absolutely every character is compelling enough to justify their own spinoff, so I could point to a “Veep” or a “Fargo” as examples of shows where I’d gladly follow the creators and any individual characters down any path they want to go, but then I’d realize that the characters work best because they’re part of a tapestry and why would I want to screw up the ensemble? Then there are shows that are mediocre because they’re about the wrong characters and might be good if they focused on a different character, so I could say that I want an “Ozark” spinoff that’s about Julia Garner’s Ruth, but more accurately, I just want “Ozark” to be about Ruth and not be a spinoff at all. Then there are the spinoffs that I think I want, but probably wouldn’t really like for very long, like a spinoff of “The Good Place” focusing on Adam Scott’s Trevor and Marc Evan Jackson’s Shawn. Might be an amusing episode, though! So my actual answer will be the desired spinoff that I was actually compelled to mention most recently in a review, specifically the tale of a dogged Brooklyn educator overcoming her personal traumas and referring to herself in the third person. Yes, I’d love “She’s Gotta Have It” spinoff focusing on Raqueletta Moss and starring tremendous Tony nominee De’Adre Aziza and if it turned out that Raqueletta Moss moonlights as a nightclub singer or something? All the better! De’Adre Aziza, “She’s Gotta Have It”

I would enthusiastically tune in to a series of motivational speeches from “She’s Gotta Have It’s” Raqueletta Moss. The character, played with utter commitment by De’Adre Aziza, first appears to be a motor-mouthed figure of fun with a giggle-inducing habit of speaking in the third person. When we get to know her better, it becomes clear that her verbal tic is a coping mechanism that could save lives if it were taught with care — for instance by Miss Raqueletta Moss.

The ending of “Fargo’s” third season prevents this dream from happening, but I would have loved to see a Nikki Swango (Mary Elizabeth Winstead) team-up with Mr. Wrench (Russell Harvard) in a spinoff show. Swango was the highlight of “Fargo” Season 3, but some of her most dynamic scenes came thanks to her unexpected criminal alliance with the deaf hitman Wrench. The two made a formidable duo, and were delightful to watch in action (the slow-mo of them leaving the hotel after the stuck it to Varga was golden). “The Adventures of Wrench and Swango” is the greatest TV show that never was (except in my mind). I could throw a dart at any given “BoJack Horseman” episode and land upon a character worthy of six seasons and a movie all their own (though if forced to choose, I’d go with Ruthie the imaginary future mouse or the lovingly chaotic Manheim-Manheim-Guerrero-Robinson-Zilberschlag-Hsung-Fonzerelli-McQuack family). I could, as is my tradition, make a case for some horrifying hybrid monster from the depths of my dearly departed “Zoo.” But I’ll split my final choices between a comedy and a drama (can you tell I’m pulling a Fienberg with all these answers?). First, to solve my main gripe about Netflix’s “Godless,” give us the spinoff about the all-female mining town of La Belle — headed up by steely-jawed sharpshooters Merritt Wever and Michelle Dockery — that the show very obviously should’ve been from the beginning. Second, let Mike Schur use his workplace comedy expertise on a “Good Place” spinoff about the office from whence Ted Danson’s Michael came, following one of his demon co-workers as she drinks anti-freeze coffee, gripes with her fire monster friends about their shitty boss, and continually goes back to the drawing board of her dream hellscape designs. The correct answer is Janet from “The Good Place.” I somewhat hesitate to say this because I usually don’t want too much of a forking awesome thing, but we all need more Janet in our lives. We can traverse into the boundless void, find out where she gets those sweet 1970s flight attendant outfits and hang with Bad Janet. If all else fails, a Mindy St. Claire spin-off that ends with her finally reuniting with her sweet cocaine.

There are three characters I have felt strongly that could carry their own storyline and series. AMC’ “The Walking Dead’s” resident shirtsleeve-averse Daryl Dixon (Norman Reedus) who has a maniacal following and tends to steal all the scenes he appears in this long-running dystopian nightmare. He has a strong lead and star presence, always has. My second pick would be in the comedy realm, Martin Starr who is Bertram Gilfoyle of HBO’s “Silicon Valley.” With T.J. Miller now gone as Erlich, I am not sure how the series will fair but I know a spinoff with Bertram Gilfoyle and Dinesh Chugtai (Kumail Nanjani) would be golden. For sheer girl power and really commanding screen presence, the play is the naturally regal Brienne of Tarth of HBO’s “Game of Thrones” star Gwendoline Christie, yet another one who eats up scenes and demands your attention. I want to see an entire series about Mark Linn-Baker’s adventures in the post-Departure world of “The Leftovers,” starting from the moment he realizes his “Perfect Strangers” co-stars all vanished but he didn’t, through his decision to fake his own departure, to his years as a fugitive, to his entanglement with the LADR scientists, the “Don’t Be Ridiculous” episode from his perspective, and perhaps seeing what does, or doesn’t, happen when he submits himself to the machine, hoping beyond hope that he’ll wind up in a world where he and Bronson Pinchot can do the Dance of Joy once again…

Jessica Jones. OK, OK, obviously the best (and only good) part of “The Defenders” has her own show, but I’m fed up with waiting. No? Doesn’t count? How about Randall (Sterling K. Brown) on “This Is Us,” with the caveat that when he gets his own show, the original one ends? All right, fine, that’s asking too much (and it’s obvious, given how much better Randall’s story is than the rest of the show).

So for my final answer, I’ll choose Lee Russell, Walton Goggin’s demonic schoolhouse leader in “Vice Principals.” It always felt like Lee was of a different breed than his series: While Neal Gamby (Danny McBride) slowly became a better man, Lee went through hell and only dug in deeper. His moral compass never straightened, despite his friendship with Gamby, and his gleeful disregard for the rules combined with his unrelenting quest for power turned him into a very special character to analyze each week. Let him bounce from school to school, city to city, corrupting more souls as he strives for the one seat he can’t quite earn. The age of the dramatic antihero may be over, but comedy’s era of the maniacal nincompoop could just be beginning.

A: TIE: “Crazy Ex-Girlfriend,” “Marvel’s Runaways,” “She’s Gotta Have It” (two votes each)

Other contenders: “The A Word,” “Back” (Sundance Now), “Curb Your Enthusiasm,” “Godless” (one each)

This Article is related to: Television and tagged Criticwire Survey, Fargo, Game of Thrones, Twin Peaks