Ridley Scott said he had been waiting for a challenge like this. "Within hours, I said, ‘Right, I’m going to recast this.'" 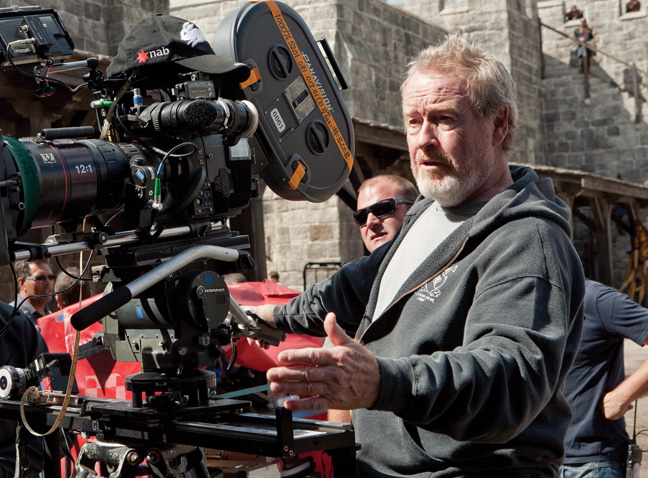 “All the Money in the World” screenwriter David Scarpa calls it “the day of infamy:” On October 29, actor Anthony Rapp accused Kevin Spacey of “making a sexual advance” 31 years ago, when Rapp was 14. Soon, others came forward with similar claims, and director Sir Ridley Scott went into action. “I didn’t exactly go, ‘Yipee!,'” he said. “I go into battle mode.”

Self described as “born competitive,” Scott recently told a Q&A audience: “Within hours, I said, ‘Right, I’m going to recast this.'” And with that he added an estimated 25 percent (about $10 million) to the film’s budget and made a kind of cinematic history, replacing the scandal-plagued Spacey with acting veteran Christopher Plummer.

Read More: ‘All the Money in the World’ Review: Ridley Scott Proves an Expert Surgeon, but the Results Are Less Impressive

Time was of the essence: Not only did the December release date capitalize on holiday crowds and award-season chatter, but in one of those Hollywood quirks there was fierce competition to tell the 45-year old story of how J. Paul Getty haggled over his kidnapped grandson’s ransom. Danny Boyle’s 10-part FX miniseries, “Trust,” debuts in January, and Sony’s Motion Picture Group chairman Tom Rothman, wanted “All the Money” to hit theaters December 22. Even before Spacey lost his reputation, Scott said that date was “difficult” for its proximity to “Star Wars: The Last Jedi.” That’s partly why Scott initially selected Spacey — a two-time Oscar winner then fronting a hit television series (“House of Cards”) — over his eventual replacement, Plummer. (The movie now opens Christmas Day.) For a week following the first Spacey allegation, Scarpa was left out of plans to restructure the film, leaving him to wonder how much goodwill they could expect when “we’ve got a movie with Kevin Spacey.” When he was summoned to the Santa Monica offices of the “All the Money” production company Imperative Entertainment, “I immediately launch into, ‘Okay, here’s how we should solve this PR problem,’” said Scarpa. When Imperative’s Dan Friedkin and Bradley Thomas said the Spacey scenes would be reshot, “I truly did not believe them,” said Scarpa, whose screenwriting credits include “The Last Castle” and “The Day the Earth Stood Still.”

As Scarpa’s mind reeled, the producers gave him a new assignment: He had to be “on call” in case revisions were required to “entice back actors” — including Michelle Williams as Gail, mother of the captured teen; Mark Wahlberg as Fletcher Chase, the liaison between Gail and her ex-father-in-law, Getty — “or to entice new actors.” In addition to retrieving locations and props, the filmmakers now had to recruit Plummer, rebook Williams and Wahlberg. Scarpa put it in perspective: “In their minds it’s like, What if one of them says no? Then it’s like, What have you got to give them?”

It was the latest swerve in the dizzying route to adapt John Pearson’s 1995 book, “Painfully Rich: The Outrageous Fortunes and Misfortunes of the Heirs of of J. Paul Getty.” Quentin Curtis optioned the rights and began working with Scarpa in 2006. “We were carrying it around for a long time,” Scarpa said. “It was kind of like the great white whale.” Michelle Williams in “All the Money in the World” Mark Wahlberg in “All the Money in the World”

Even when “All the Money” had the green light, Scarpa said there was no time for prep, so “every single minute we had to be scrambling.” But with Scott’s regular coterie of collaborators and has four decades of filmmaking experience, they finished the film without incident.

Enter the Spacey scandal. “All of us, first of all, on a human level, are reeling the same way we’re reeling about all of these stories,” Scarpa said. Sony never proposed scrapping the film, but Scott saw the clear-cut, rogue strategy for salvaging it. He secured all the original locations where Spacey filmed, in three countries: Italy, Jordan, and the United Kingdom (Scott’s knighthood helped him land the former Palace of Placentia, Queen Elizabeth I’s birthplace, to double as Getty’s residence).

Once again, he would “line the cameras up the way they were, because why do it [different], it look[ed] pretty good to me [the first time],” Scott said. Next he called Williams and Wahlberg: “‘Hello? Did you read that this morning? Yeah, okay. This is what I’m going to do.’” They agreed to reprise their roles. Mark Wahlberg, Charlie Plummer, Michelle Williams and Ridley Scott at the “All the Money in the World” premiere

On November 8, after meeting Plummer in New York the night before and sending him the script, Scott got his acceptance call: “I think it’s jolly good,” Plummer said.

At the press conference, Plummer recalled the meeting fondly. “He flew all the way from London to see [me], unbelievable,” he said. “If I didn’t want to do it, I would have done it. Just from that alone… I admire his work tremendously, and I would have totally done it, oh yeah. Even if I loathed the script.” But Plummer actually felt the script was “wonderful,” saying he “relied on [it] thoroughly, having made no attempt at research.”

Over the Thanksgiving holiday, the crew traveled to Rome and London (desert landscapes were green screened). The crew was excited by unheard-of opportunity for a digital do-over, but editor Claire Simpson played bad cop: There was no time to experiment. Scott delivered Simpson 22 Plummer scenes that could be precisely dropped into the Spacey gaps. For Scarpa’s part, he had only to make “tiny, tiny tweaks.”

On December 4, four days after production wrapped, “All the Money” screened for the Hollywood Foreign Press Association; shortly thereafter, it earned Golden Globe nominations for Williams, Plummer, and Scott. “It was a bit of coordination and geometry,” said Scott at the Q&A. “With a lot of panic thrown in.”

Scott offered to show Plummer footage of Spacey in the role; Plummer declined, vehemently. Plummer sounded unenthusiastic about Spacey’s intricately applied wrinkles and prosthetics, which he undoubtedly saw in the film’s old promotional materials. “I think in playing real people, you have to be as subtle as possible [with makeup],” he said at the press conference. “If you try to make an imitation out of it, you might as well wear a mask. You have to save something from inside you as a person that can be revealed through the character that you’re playing, otherwise it is a cheap imitation.” Scott conceded at the Q&A, “When I worked with Kevin, I got on very well, and he did a great job.” Yet Spacey’s portrayal of Getty was “colder,” because the younger actor spent five hours per day in hair and makeup to emerge as an “unrecognizable” octogenarian. “With Chris, he’s got this inordinately handsome ageless face, where a smile is charming, and [he has] a glitter in his eye, with the same words he’s somehow more lethal.” The oldest performer to ever win an Oscar (a 2012 Best Supporting Actor, for “Beginners”), Scott said Plummer required little direction. “When you get a golden oldie like that… I just sit and watch and go, ‘Damn, that’s pretty good.’”

So how does Scott view the man whose miserly ways he took such extreme, globetrotting lengths to translate into cinema? Misunderstood. “Anybody who is that wealthy is bound to become that private, because when you’re that wealthy, it’s very difficult to have friends… they think everyone’s after their money,” said Scott when introducing a Friday night screening on the Sony lot. “I don’t know that [from firsthand experience], because I’m not that wealthy, so I’ve got lots of friends.”

As for Plummer, despite being at the center of one of the boldest cinematic experiments and the enthusiasm of awards groups and critics, he remains true to a lifetime preference of leaving his performances behind. Talking to a publicist on a pre-press conference elevator ride, Plummer said: “I’m never going to see the movie. I don’t want to.”

“All the Money in the World” arrives in theaters on this Monday.

This Article is related to: Film and tagged All the Money in the World, Christopher Plummer, Kevin Spacey, Ridley Scott, Sexual Harassment