There's hope for Hollywood yet, as this year's top 10 list extends to a top 12. 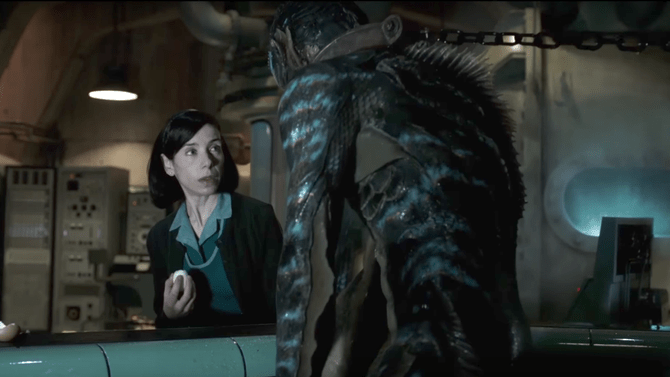 Track my film passions of the past year and the result is this list. These are the films that wowed and moved me, that turned me into a rabid champion, that gave me hope that brilliant cinematic storytelling — and a rebel spirit — is alive and well. It turned out to be a strong year for women directors (five), romances (three), World War II dramas (two), Angelina Jolie movies (two), animation (one), and documentaries (one). Directed by Nora Twomey of Cartoon Saloon (“The Secret of Kells”) and executive produced by Angelina Jolie, Irish-Canadian “The Breadwinner” is based on Deborah Ellis’s YA novel about 11-year-old Parvana (voiced by Canadian actress Saara Chaudry), a strong-willed Afghan girl who disguises herself as a boy in order to provide for her family and save her father under threat from the Taliban. The beautifully written, designed, and voiced drama about love, hardship and perseverance won Best Feature at the first Animation Is Film Festival and is a surefire Oscar nominee. The first reason why this movie is so good: It’s authentic. You couldn’t make up this truth-is-stranger-than-fiction culture-clash story, written from life by “Silicon Valley” star Kumail Nanjiani with his wife and co-producer Emily D. Gordon (Zoe Kazan), who falls in love with Nanjiani before she’s hospitalized with a mysterious illness. Producer Judd Apatow and director Michael Showalter leaned into the romantic side of this comedy, inspired by love stories from writer-directors like Steve Martin, Richard Curtis, Nora Ephron, and Woody Allen. Unlike most Hollywood romantic comedies, the relationship between Nanjiani and Gordon is balanced, their witty dialogue and smart repartee equally strong. The filmmakers also made sure that Nanjiani’s struggles with his Pakistani family were in balance with Gordon’s parents. While Kazan and Holly Hunter seem perfectly in tune as daughter and mother, “Everybody Loves Raymond” TV star Ray Romano is a revelation as her anxious father. This true immigrant culture clash is timely, sweet and endearing, and carries real emotion.

For Sean Baker’s follow-up to iPhone movie “Tangerine,” he returned to another look at outsiders living on the margins of society. (This time, he shot in 35mm.) Baker had long wanted to make a film about resilient children and was fascinated by a strip of Orlando’s budget motels on Route 92, just a mile away from Disneyworld. Once designed to lure tourists, they now teem with families on the edge. The movie builds dread, concern, and anxiety for the kids, who navigate between joyful fun and obnoxiousness. Instead of E-rides, the kids find their fun in spitting on cars, peeking at topless bathers, stalking grazing cows, and panhandling for soft-serve ice cream to slurp before it melts in the blazing heat. Baker encouraged both the adults and the children to improvise, using the Hal Roach “Our Gang” shorts as a model. Six-year-old Monee (Brooklynn Prince) is the focus of the slice-of-life movie, along with two-time-Oscar nominee Willem Dafoe (“Platoon,” “Shadow of the Vampire”), whose frustrated but humane motel manager holds this poverty-row drama together. He’s the closest thing to a father figure and civilizing force these marginal characters will ever know. 8. “First They Killed My Father” (Netflix)

If writer-director Angelia Jolie hadn’t convinced Netflix content chief Ted Sarandos to back “First They Killed My Father,” the movie wouldn’t exist. The final result is the film she wanted to make: Based on the 2000 memoir of co-screenwriter Loung Ung, who was five when the Khmer Rouge forced her family into work camps, it required a $24 million budget, a 60-day shoot, and a two-hour, 16-minute cut. While Jolie’s film may look like a straightforward narrative, it breaks several Hollywood rules: She shot in Cambodia with unknown local actors in their own language, and told the story from the perspective of a five-year-old girl. First-time actor Sareum Srey Moch is a natural; she draws you into the terrible events enveloping her family. Cambodian citizen Jolie, working closely with producer Rithy Panh and “Slumdog Millionaire” cinematographer Anthony Dod Mantle, delivers a strong contender for Adapted Screenplay and Best Foreign-Language film. Christopher Nolan went rogue with this $100-million World War II movie, an immersive, almost-silent action epic that brilliantly toys with three disjunctive time frames. (Nolan has admitted that he said “fuck it” when it came to the risk of disorienting the audience.) “Dunkirk” also defies convention by relying on a sprawling ensemble in which no actor dominates, although newcomer Fionn Whitehead and supporting veterans Mark Rylance, Kenneth Branagh, and masked Spitfire aviator Tom Hardy all carry enormous emotion. Nolan needn’t have worried: Global moviegoers took the blockbuster to $525 million worldwide, and he will finally nab that elusive Best Director nomination. Cannes jury prize-winner “Loveless” (Sony Pictures Classics) is a moving, intense family drama that damns Russian society, which writer-director Andrey Zvyaginstev portrays as consumed by careerism, selfishness, greed, and even profound neglect of its own children. His last film, Oscar-nominated “Leviathan,” was also a film critical of Russia at a time when the country’s culture ministers demand that their industry reflect their nation in a positive light. Even though the elegantly wrought wintry drama was financed independent of the Russian film industry and government funding, Russia submitted it as its official Oscar entry. Built on a series of talky dramatic sequences in which new Prime Minister Churchill (Gary Oldman), supported by his wife Clemmie (Kristin Scott Thomas), must take on the fight against the Nazis who are swiftly conquering Europe and cornering some 400,000 Allied forces in Dunkirk, “Darkest Hour” focuses on the suspenseful period when France and Belgium fell to the Nazis. That’s when the PM wrote and delivered three of the greatest speeches of all time, and single-mindedly pushed his country to fight the German menace, even as the British were still recovering from The Great War. He has to figure out how to turn around his country and its pacifist Parliament to rise up to achieve victory against the Nazis. Oldman finds an impish childishness and humanity inside the man, who was full of energy yet took a nap every afternoon, who drank constantly but never seemed to get drunk. King George VI plays an important role as the voice of rationality; Australian Ben Mendelsohn makes a surprisingly ramrod-straight royal. While Wright breaks out of the claustrophobic war room with swooping crane shots, dramatic lighting in Parliament, and out-the-car-window Churchill-POV slo-mo tracking on London pedestrians, the movie was largely shot on soundstages in Manchester and London. Wright leaned into spare storytelling, and it pays off. Denis Villeneuve’s long-awaited sequel to Ridley Scott’s 1982 “Blade Runner” pushes the state of moviemaking to its apex. Like “Arrival,” Villeneuve and writers Hampton Fancher and Michael Green fashion a cerebral, complex, and visually sumptuous narrative that is not easy to parse. Even if its backers never recoup their $185 million negative cost, cinephiles can revel in the movie’s many wonders. Villeneuve’s eye-popping collaboration with long-time cinematographer Roger Deakins and production designer Dennis Gassner is compelling viewing, especially in large formats. At its heart, this movie is an identity quest: The question of whether K (Ryan Gosling) is a replicant, or the child of a replicant, or of Deckard (Harrison Ford) — who could be a replicant — haunts the movie. Like Pinocchio, as K clutches a toy horse with his birthdate on it and questions the origins of his own memories, he wonders: Could he be a real boy? With heart-tugging pop-up road movie documentary “Faces Places,” 89-year-old Honorary Oscar-winner Agnes Varda is at the top of her game, even if she’s going blind and leaning on a cane. She has an uncanny ability to find arresting moments, working with artist enabler J.R. as they travel the French countryside posting giant photos of the charming people they meet. This love letter to the creative spirit scored big on the fall festival circuit, winning Best Documentary at Cannes, Toronto’s documentary audience award, and Best Non-fiction Film from the New York Film Critics. Photo by Merie Wallace, courtesy of A24

Clearly, writer-actress Gerwig has been preparing to take the directing reins her whole life. It’s no surprise her solo directing debut is a full-blown New York Film Critics Circle-winning triumph. (After all, it is the best mother-daughter dramedy since “Terms of Endearment.”) Irish Oscar perennial Saoirse Ronan (“Atonement,” “Brooklyn”) plays Christine “Lady Bird” Macpherson (a version of Catholic high schooler Gerwig) as a scrappy and voracious culture-vulture eager to escape her Sacramento confines for an Eastern college. Laurie Metcalf nails her angry, frustrated, penny-pinching, and loving mother who can’t help returning to old arguments. Tracy Letts is Lady Bird’s adoring father, and Lucas Hedges and Timothee Chalamet are her challenging romantic entanglements. “Lady Bird” wrings universal appeal out of its specific story, and marks a high achievement not only as a superb, exactingly wrought screenplay but a fully realized piece of cinema. 1. “The Shape of Water” (Fox Searchlight)

Artists create universes that are extreme visions of our own. With his English-language masterwork “The Shape of Water,” Guillermo del Toro builds, brick by brick, an immersive fantasy world (shot in Toronto around the venerable Elgin Theatre) inspired by the ’60s melodramas of Douglas Sirk and the horror classic “The Creature from the Black Lagoon” that could only come from his prodigious imagination. Del Toro artfully mixes genre and commercial elements with his own personal imprint. This fairy-tale romance matches lonely mute laboratory cleaning woman Eliza Esposito (incandescent Sally Hawkins) with a well-muscled captive merman (Del Toro stalwart Doug Jones). They see beauty and sensuality in each other where others, like Michael Shannon’s abusive government torturer, see abhorrent aberration. (He prefers to bludgeon the gorgeous aquatic creature he calls “the asset,” while Michael Stuhlbarg’s Russian-born scientist appreciates the asset’s living, breathing value.) The production is impeccably photographed and crafted, yielding indelible images such as Eliza floating in her flooded apartment above the movie theatre, making watery love to her sexily glowing aquaman.

This Article is related to: Film and tagged Lady Bird, The Shape of Water, Top Ten Lists