From classics like "It's a Wonderful Life" and "White Christmas" to off-kilter gems like "Bad Santa" and "The Nightmare Before Christmas," the cheeriest season of all has plenty of cinematic joy to go around. 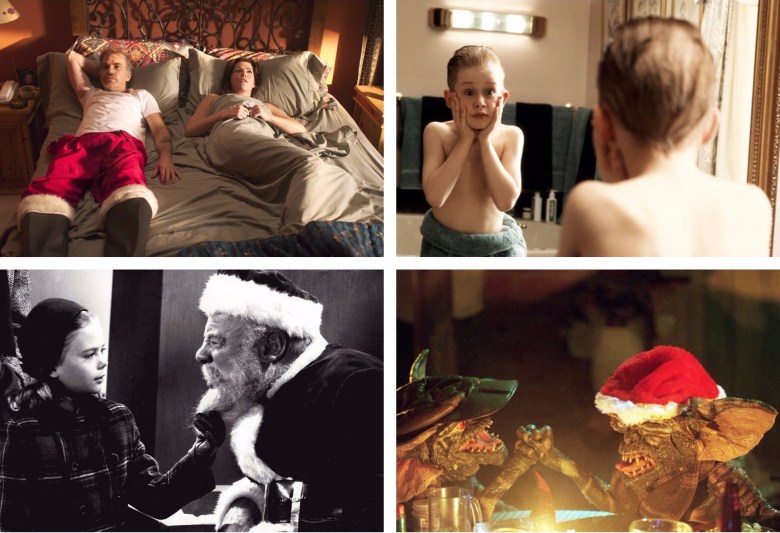 As the party in power continues to wrongly correct “Happy Holidays” wishers with “Merry Christmas,” we’d like to offer you a diverse round-up of our favorite seasonal fare, plucked from different parts of the calendar and with a wealth of genres that speak to the crossover power of seasonally appropriate joy. Regretfully, Hollywood continues to crank out Christmas movie after Christmas movie, ignoring many other wonderful traditions and skewing our pool of options in the process.

We debated admitting entries to this list that had either a single festive scene (“Call My by Your Name”) or happen to take place during the present-buying season (“Die Hard”), but ultimately decided to go with ones that explicitly stuck to the winter holidays (Garry Marshall’s greeting card-company approved late work — “Valentine’s Day,” “New Year’s Eve,” and “Mother’s Day” — still did not make the cut). So our roll call features lots of titles that television programmers will be playing on an endless loop until January, plus a few less family-friendly flicks. Classics, really, though some with a twist.

Check out our top 20 ranking below.

If something can go wrong for the Griswold family, it will go wrong for the Griswold family. For their third outing as the world’s most folly-prone family, the Griswolds stayed close to home to unspool a side-splitting adventure that ably combines both totally understandable foibles (tangled Christmas lights, the terrors of a too-close family, jelly of the month club bonuses) and buckwild breakdowns (those neighbors, the cat, that kidnapping) into one wonderfully rewatchable package. Nestled all snug in their beds — a la sugar plums or something festively similar? — is the deep sense that, for all the mishaps and insane setpieces that dominate the film, there’s still an affection and real love for family, the holiday spirit, and spending time together, even when things get ugly. — Kate Erbland The great Michael Caine plays Scrooge with all of the gravitas of a Shakespearean actor in this joyous remake of the Charles Dickens classic, except his scene partners are all puppets. Caine understood the comedic possibilities of juxtaposing his dour Scrooge with a gaggle of squawking Muppets, and he was right. Brilliantly casting Gonzo and Rizzo the Rat as odd couple narrators, director Brian Henson delivered a smart and accessible joy ride of a film that introduced a generation of kids to the Christmas classic. The ghost of movies past can resurrect this one any time. — Jude Dry John Candy and Steve Martin in “Planes, Trains and Automobiles”

Writer-director John Hughes followed his touchstone trio to teenagehood (“Sixteen Candles,” “The Breakfast Club,” and “Ferris Bueller’s Day Off”) with a comedy (until it’s not) about woefully-matched, 40ish travel companions, en route to Hughes’ beloved Chicago suburbs. Seemingly, shower curtain ring salesman Del (John Candy) is a friendly everyman and devoted husband, still vexing ad exec Neal (Steve Martin) non-stop, first by nabbing his cab, later by accidentally torching his rental. But Del is actually so shattered by the long-ago loss of his wife that he continues to talk about her in the present tense, something emotionally checked out Neal realizes only when finally flanked by his own family for Thanksgiving. This was one of Candy’s most affecting performances; he and Hughes had their careers short by respective heart attacks in 1994 and 2009. — Jenna Marotta

The traditional holiday movie builds towards some climactic takeaway: a troubled character finds new value through the convenience of the Christmas spirit. “Christmas, Again,” the bittersweet debut from writer-director Charles Poekel, is a welcome deviation from that tendency. Starring Kentucker Audley (“Sun Don’t Shine”) as a downtrodden loner selling Christmas trees in Brooklyn in the aftermath of a breakup, and the fleeting connection he finds with a fellow lost soul, the movie makes no grand gestures but provides a satisfactory arrangement of many small ones.Shot on grainy 16mm by cinematographer Sean Price Williams (“Listen Up Phillip”), “Christmas, Again” offers the unique pairing of vibrant holiday colors with a foundation of gritty realism built around its impressive lead performance. The character is himself a contrast to his surroundings — a low energy sad sack named, of all things, Noel. Audley imbues Noel with the characteristics of a frightened lost soul. Not everyone gets the chance to celebrate on the holidays, and “Christmas, Again” is an eloquent illustration of how alienating it can feel when the rest of the world lights up around a single lost soul. — Eric Kohn One of the holiday’s season’s most beloved tropes is the curmudgeon who discovers the “true” meaning of the holiday spirit and has a change of heart. What was good enough for Scrooge became good enough for Dr. Seuss’ Grinch, a honey-voiced creature (voiced by horror legend Boris Karloff) who detests Christmas so much he slithers down the chimney and steals every last ornament and morsel of Christmas dinners. The Grinch expects to hear the wails of everyone in Whoville after they find their homes bare on Christmas morning, but instead the community band together and celebrate anyway, as the gifts were never as important as love. This causes The Grinch’s heart to grow three sizes, and he rushes down his snowy mountain to give back gifts and celebrate the season with everyone. The story might be familiar, but watching The Grinch tiptoe around to “You’re a Mean One, Mr. Grinch” always brings a surge of fuzzy nostalgia every Christmas season that never seems to get old. — Jamie Righetti Unlike “A Charlie Brown Christmas,” revisiting this ’60s animated TV special doesn’t reveal a masterpiece, but it is the definition of comforting nostalgia. From the raspy sound of Jimmy Durante’s narration to the pastel animation of the town, watching this movie – about a journey to the North Pole to save a snowman from melting – is like the warmth of listening to an old record. There’s also a satisfying simplicity to the way it captures the wonder of childhood with the magic hat, dismissed by the gloomy adults, that beings their Snowman to life. Luckily, the popularity of the song keeps this gem in the Christmas rotation as it serves as an analog alternative to the shiny plastic of modern holiday fare. – Chris O’Falt

Page 1 of 4
Continue Reading: The 20 Best Holiday Films of All Time Ranked, from ‘Bad Santa’ to ‘It’s a Wonderful Life’

This Article is related to: Film and tagged Holiday Films