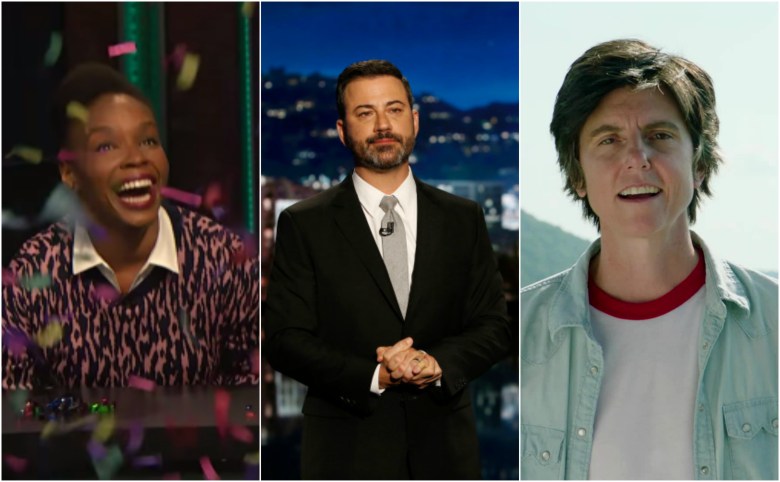 Even as most shows have begun to coalesce around the same headline-response efforts on a daily and weekly basis, there’s still enough variety in late night TV to avoid painting it with the same broad brush. Sure, some days make it hard for approaches to the day’s biggest news stories not to have a little overlap.

But, for the most part, the stand-out moments from late night TV in 2017 come from the singular ways that these shows confronted a wide range of issues and curiosities outside DC confines. Some of them were political, others were defiant, and more still added some much-needed silliness amidst a yearlong wave of anxiety.

With the sheer volume of late-night-structured shows on TV, we were able to pick out a memorable moment for each of them, across network, broadcast, and premium cable here in the States. (If you’re looking for the year’s best Graham Norton clips, here’s a strong contender.)

Going back to live TV, Gethard and Co. had incredible adventures in Missouri, gambled away the budget, and had a friendship-testing duel hovering above a bathtub of ice. But any return trip from “Talkin’ Bread” hosts Paul Scheer and Jason Mantzoukas is cause for celebration. When Gethard, as planned, abandoned the show right after the cameras started rolling, watching the show ascend to another level of on-screen chaos was unlike anything else on TV this year, live or taped.

“Conan” — Triumph at the Inauguration

After a full year on the campaign trail, it was only fitting that Triumph would see the journey through to its infamous end, roasting giddy Inauguration attendees. As usual with Triumph segments, comedian Robert Smigel found a few willing participants and drew some unexpected nervous laughter from some unwitting passersby. (Stick around for the outtakes.)

“The Daily Show with Trevor Noah” — Slavery and Immigrants

The current political discourse, whether approached in a comedic way or not, doesn’t leave a whole lot of room for semantics. When Trevor Noah and “The Daily Show” took the time to think about the implications of Ben Carson’s comments about immigration earlier this year, the result was an honest look at the lasting effects of the words we choose. And the value of that extends to not just singling out one soundbite, but considering what it means, regardless of who says it.

The #1 show in late night has had a busy year, from categorizing Bill Maher’s history of racist comments to comparing Joe Budden to a Le Pain Quotidien waiter. But watching the two bask in the misfortune of “Wheel of Fortune” contestants is the purest form of what these two do so well, flipping the inexplicable into the best kind of living room laughs. (That fake Thanksgiving dinner conversation really puts it over the top.)

“Full Frontal” was able to find some positives in 2017, including an encouraging development in the show’s attempts to get the Georgia legislature to test the state’s rape kit backlog. A few months later, Bee and Co. were back to another under-covered issue beyond the weekly headline rage: the use of drug kits. Through the story of a pair of misunderstandings that quickly diverged into very different outcomes, it’s a segment that addresses societal double standards and the lasting effects of a de-emphasis on scientific research.

Silverman has brought her very specific viewpoints to her new Hulu show, making a welcoming environment for guests and audiences alike. This segment also shows that the guest contributions to the show also fit into the mission statement of “I Love You, America” very well. This segment on Tig Notaro’s crash course in auctioneering is right in line with the show wanting to take people outside of their comfort zone and have them learn about a part of the country in a way they wouldn’t have known otherwise. It’s sweet, hilarious, and a lovely bit of humanity.

“The Jim Jefferies Show” — The Weatherman

The world on fire. Nihilistic Brad Pitt telling us that nothing matters. Jefferies signing off by saying “I think we can all do better.” Not even a single episode into the show’s run, this minute summed up 2017 about as succinctly as anything else this year.

“Jimmy Kimmel Live” — “Before I go into it, I want you to know it has a happy ending…”

Of all the network hosts, Kimmel was the last one to fully enter the political fray, either by choice or abstention. But he did so with such sincerity that it captured the national spotlight at a moment when his words were needed most. Telling the story of his newborn son’s heart surgery wasn’t a manipulative ploy to use his own personal life to make headlines — instead, it was a personal plea appealing to the decency of people who had the power to make meaningful change.

Part of perhaps the season’s best episode (which also included the presidential wax museum) “Last Week Tonight” built on their Net Neutrality segment by offering a concise look at local news and media conglomerates and the ways the two are already intersecting. As a way to not only decry the headlines of the day, but to look at exactly how a majority of the country may be getting them in the future, it’s another example of how this show’s best segments seem to be speaking to audiences weeks and months beyond their airdate.

Meyers continues to be one of the most consistent sources of commentary in the comedy world, and for sheer goofy brilliance, there’s not a better recurring segment on late night then the Joke Bucket. But for sublime spontaneity and pure, unadulterated joy, nothing beats this triple set of reactions to a confetti cannon. May the new year bring such unexpected delights.

This Article is related to: Television and tagged Late night, Stephen Colbert, Year in Review 2017