We asked a range of influencers in the independent film world to share the very best of 2017. 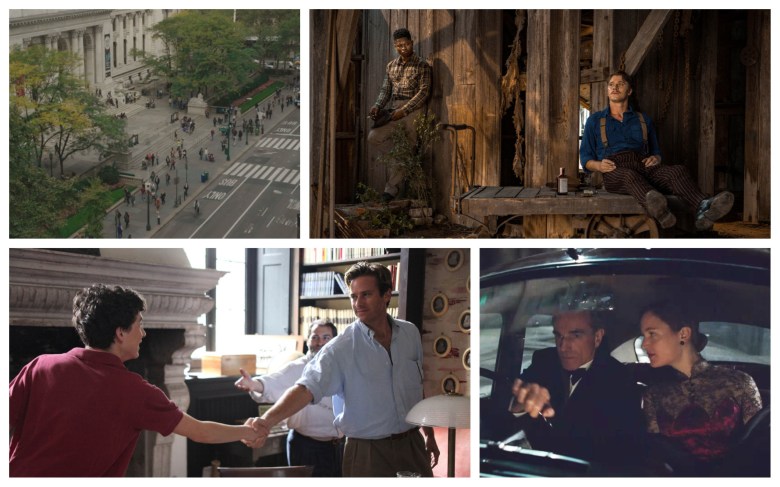 1.” Dunkirk” (The Best Movie of the Year)
2. “Three Billboards Outside Ebbing, Missouri” (Almost a perfect movie)
3. “Phantom Thread” (Still craving mushrooms)
4. “The Shape of Water” (Vintage cinema clashed with all sorts of monsters)
5. “Baby Driver” (The music)
6. “Mindhunter” (Forever thankful I had a loving mother)
7. “The Lost City of Z” (“The Lost World” re-envisioned… with Jax Teller)
8. “Logan” (Every list should have a western)
9. “The Young Pope” (Sorrentino takes on the church)
10.”Lady Bird” (Doesn’t everyone remember leaving for college)

2017 has been a “transitional” year — to say the least. As a reflection of our ever-changing media landscape my top ten list includes a combination of feature narratives, traditional and interactive television series and one 19 hour podcast every film enthusiast should listen to. As much as it pains me, “The Shape of Water,” “Three Billboards Outside Ebbing, Missouri,” “Patti Cake$,” “Logan,” “The Post,” and all other Fox films have been omitted. Perhaps it’s the gallows humor necessary to survive today’s political climate, but dark comedy stood-out in many of my favorite 2017 films, which are below along with reviews from some of my favorite critics.

My Two Favorite Films of 2017
“Personal Shopper” by Olivier Assayas
Assayas threads the needle in this intricate meditation on grief, solitude and the afterlife anchored by a subtle, engrossing performance by Kristen Stewart.  Add in a moody Hitchockian ghost story and this film would fall apart or be overdone in the hands of a less capable, less confident director and actor pairing. – Review from Justin Chang at The Los Angeles Times

“Phantom Thread” by Paul Thomas Anderson
Another internal struggle masterpiece from Anderson and Daniel Day-Lewis’ immersion is unrivaled.  However, Day-Lewis has met his match in Vicky Krieps, who gives as good as she gets.  Her Alma penetrates the selfish artist cocoon of his Reynolds and it’s their battle for control that yields some of Anderson’s best character work yet.  The atmosphere specificity is mesmerizing and the craftsmanship superb.  An AV tour of just the costumes, wall ornaments and banisters accompanied by Jonny Greenwood’s score might have made my list. – Review by Eric Kohn at IndieWire

The Rest of My Favorites in Alphabetical Order
“Blade Runner 2049” by Denis Villeneuve
Following “Sicario” and “Arrival”, Villeneuve delivers for the third straight year as he expands on Philip K. Dick’s and Ridley Scott’s inquiry into the meaning of life.  Hans Zimmer’s pulsating score and Roger Deakins’ dazzling cinematography are captivating throughout and Deakins will hopefully win his long overdue Oscar. – Review by Anthony Lane at The New Yorker

“Call Me by Your Name” by Luca Guadagnino
Timothee Chalamet exquisitely portrays young love and male adolescence and the film’s rhythm perfectly fits a summer in Northern Italy.  Moreover, the father/son conversation and Chalamet by the fireplace that bring Guadagnino’s gem to a close may be the most emotional scenes of the year. – Review by David Ehrlich at IndieWire

“Get Out” by Jordan Peele
Peele’s directorial debut is filled with laughs and scares, but it’s the fearlessness with which he satirizes racial stereotypes that reveals his vital talent. – Review by Manohla Dargis at The New York Times

“I, Tonya” by Craig Gillespie
Margot Robbie’s acting is legit, Allison Janney is a comic treasure and this is a delicious pop culture reflection.  However, it’s Gillespie’s absurd yet poignant look at this tragic figure overwhelmed by domestic violence, class conflict and tabloid obsession that sticks the landing. – Review by Owen Gleiberman for Variety

“Three Billboards Outside Ebbing, Missouri” by Martin McDonagh
This quest for justice black comedy provides Francis McDormand her best role since “Fargo” and McDonagh deftly walks a tonal tightrope of humor, affection, violence and redemption. – Review by Christopher Orr at The Atlantic Women in Film
There is no doubt that all of the incredible women I worked with this year (feature films, docs, shorts, directors, producers, curators, editors, actors, artists, writers, programmers, friends) provided the most inspiration to me this year. They have my utmost respect and gratitude and I will get their work shown as much as I possibly can in 2018.

“The Young Pope”
This is the best, ballsiest, and most beautiful show to ever air on television. Paulo Sorrentino proves that tv can be outrageously gorgeous and complicated. The Pope bonnet alone is the most inspiring visual of 2017.

“The Rabbit Hunt”
When I watch Patrick Bresnan’s short film, a partner to his 2016 short “The Send-Off” with Ivete Lucas, I see a new path for documentaries. Extraordinarily visual, this is a quiet portrait of a small community in South Florida that is not judged or exploited, only revealed.

“The Florida Project”
As a Floridian, I appreciate Sean Baker’s sincere kindness in focusing on a hidden community in Florida rather than shiny easy parts. His films are always so special and wholly unique.

“The Eyeslicer”
Anyone who says “let’s get weird” when talking about presenting short films is my kind of person. Dan Schoenbrun and Vanessa McDonnell’s project doesn’t just help push how we consume short films and promote amazing filmmakers but it’s also a hell of a lot of fun!

“Lady Bird” and “Landline”
I related so much to the way these films both delicately and humorously capture the moments of pain, beauty, and messiness that occur throughout a women’s life (on her own and with her family). I need and love to see women’s stories told by women.

“Sylvio”
A movie about connecting with others, being true to yourself, and making cool things with people you like. Definitely needed this.

“Let the Corpses Tan”
(Not released yet but saw at TIFF and love it so much I can’t not mention)
No one makes films like Hélène Cattet & Bruno Forzani – this film is a visual masterpiece. Imagine if Mario Bava and Fernando di Leo made an art film, spaghetti western glitter bomb with Morricone. All my favorites.

“Get Out”
Not going to lie, I have issues with “Get Out” but I love the fact that it exists and challenges what people think about horror and I that I keep thinking about it. It’s part of a larger conversation about how horror (which is satire) is best equipped to comment on the world crumbling around us.

Page 2 of 6
Continue Reading: The Best Films of 2017, According to the Indie Film Community

This Article is related to: Film and tagged Indie Film, Year in Review 2017