This list of movie musicals is all singing, all dancing, all fun — because we could all stand to have some upbeat entertainment. 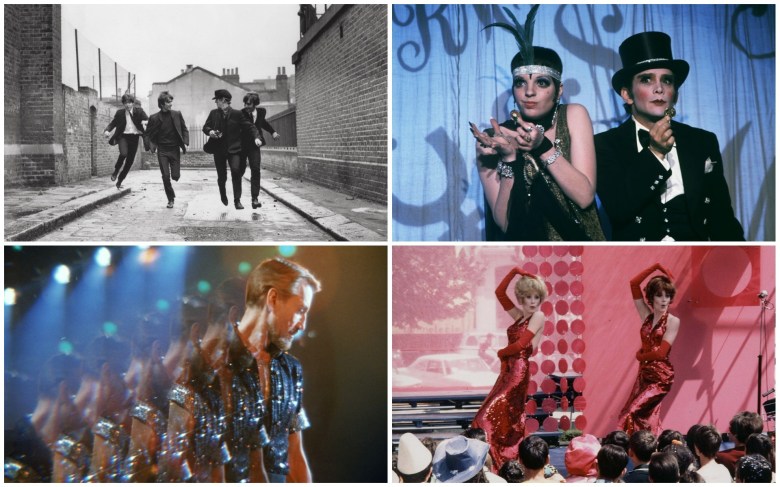 Long before One Direction or the slew of boy bands populated the late ’90s, there were The Beatles and the legions of screaming fans that followed them across the U.K. Smartly capitalizing on the Beatlemania sweeping the world, Richard Lester’s “A Hard Day’s Night” exposed audiences to the Fab Four’s personalities with a day-in-the-life snapshot that followed the band from backstage to center stage. Filled with madcap humor and a slew of memorable hits, “A Hard Day’s Night” is still a delight. Although the Beatles were behind several more films, including the truly magical animated film “Yellow Submarine,” “A Hard Day’s Night” was the film that introduced John, Paul, George, and Ringo to the world and set the precedent for all band films to come. — JR During the Depression, in the early 1930s at Paramount, Ernest Lubitsch wasn’t just a prominent director; he was a house brand. Witty, sophisticated humor, set in Hollywood’s version of European aristocracy, glided by with a liberated (pre-Code) attitude about sex. With “Love Me Tonight,” Rouben Mamoulian — an always-serviceable studio director — takes stars Maurice Chevalier and Jeanette MacDonald, Rodgers and Hart songs, and somehow out-Lubitschs Lubitsch, with a film that is as playful with form as it the story of a tailor (Chevalier) trying to pass himself off as a nobleman in love with the Princess (MacDonald). The opening of Paris as a city symphony is one of the greatest sequences ever filmed and “Isn’t it Romantic?” is somehow even more cinematically inventive. — CO Rodgers and Hammerstein’s final musical together opens with a cherubic Maria (Julie Andrews) serenading the Swiss Alps as if each peak and valley were enamored with her. Its reputation among young cinephiles may have cost it points with older ones, but they would be mistaken to discount this cinematic masterpiece simply for having a heart of gold. Lest we forget that director and producer Robert Wise edited “Citizen Kane,” the hills truly do come alive under his lens; every shot is stunning. As Maria and her merry brood march exuberantly through Vienna’s mazes and meadows in sweetly tailored drapes, the landscape vibrates off the screen to their rhythms. Andrews and Christopher Plummer brought a quiet passion to their chaste onscreen romance, proving that — just like their movie — kid-friendly doesn’t have to mean unsophisticated.  — JD One of the most iconic queer stories ever told, John Cameron Mitchell adapted his star-making off-Broadway musical effortlessly to the screen, giving a whole new generation its very own “Rocky Horror Picture Show.” The movie launched a varied and impressive filmmaking career for good reason. He plays the titular character, a role he reprised in a recent Broadway revival. Hedwig is a force onstage and on screen: Soulful, provocative, funny, yearning, and deeply philosophical. Her journey is as much about gender and cultural identity as it is about heartache and hormone-fueled lust. Mitchell’s language may not jive with current norms around trans identity, but Hedwig was ahead of her time. Drawing from Plato, her lessons are evergreen. We all could use a many-gendered oracle to teach us the origin of love. — JD During an eight-month period in the mid-’60s, Julie Andrews appeared onscreen twice as iconic, best actress-nominated, singing-and-dancing nannies. She won in 1965 for her winning performance as a no-nonsense enchantress summoned to Edwardian London by a willful brother and sister. Mary’s preferred mode of transportation is umbrella, her carpetbag carries a room’s worth of furniture, and she enjoys tea parties on the ceiling. With the children in tow, she befriends eccentric chimney sweep Bert (Dick van Dyke), and the two are unbearably charming whenever they’re together. The film is delightfully quirky, unexpectedly deep, and not nearly as saccharine as its marketing would have you believe. Directed by Robert Stevenson, “Mary Poppins” was nominated for 13 Oscars — more than any Disney film to date — and also won Walt Disney the only Best Picture honor for the studio during his lifetime. “Chicago” director Rob Marshall is helming a Christmas 2018 sequel, “Mary Poppins Returns,” with Emily Blunt and “Hamilton” creator Lin-Manuel Miranda as the leads. — Jenna Marotta

Page 2 of 4
Continue Reading: Ranking the 20 Best Movie Musicals of All Time, From ‘Singin’ in the Rain’ to ‘Lemonade’

This Article is related to: Film and tagged Lemonade, Mary Poppins, Musicals, The Lion King