From "Fury Road" to "Magic Mike XXL," these sequels leveraged their franchises to take bold chances and create something truly spinoff special. 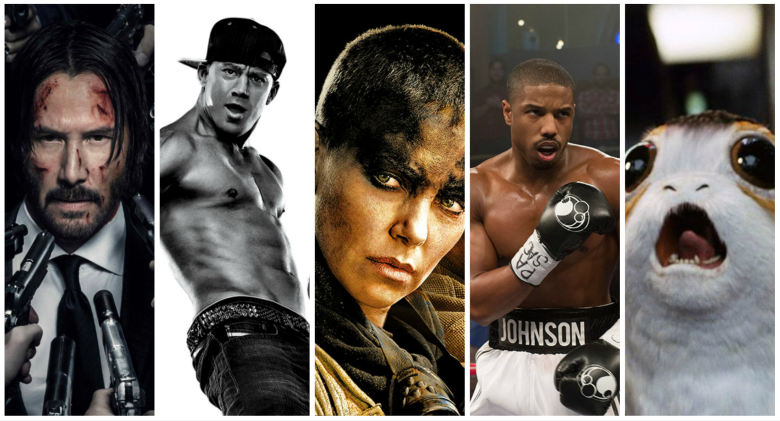 The third (and best) installment in Tom Cruise’s seemingly deathless spy franchise may not boast the dizzying highs of “Ghost Protocol” or the operatic charms of “Rogue Nation,” but no other movie — in this series or beyond — recognizes the sheer entertainment value of watching Tom Cruise run around for two hours. The guy is like the Energizer Bunny, but way more intense, and he does his own stunts. J.J. Abrams’ debut feature is a relentlessly sleek and efficient adventure, chasing Ethan Hunt around the globe as he tries to outrun the greatest threat he’s ever faced: domesticity. Also, Philip Seymour Hoffman, whose memorably spiteful villain is an IMAX-sized testament to the late actor’s talent. Add in some of the most engaging action sequences of the 21st century and a surprisingly real emotional undertow and you’ve got the rare three-quel that tops its previous two movies in every way. — DE

The “Rocky” franchise has been knocked down (and out) so many times, but it’s always been hard to fully count out the power of Sylvester Stallone’s star-making boxer with a heart of gold (and fists to match) story. For its first followup in nearly a decade, “Creed” took a play straight out of the “yo, here’s how you make a good sequel” book and ran with it, hiring on a talented writer and director in the form of Ryan Coogler (a Sundance alum who made the jump from indie fare to blockbuster sequel seemingly without a hitch), crafting a story around a compelling new star (both actor Michael B. Jordan and the character he plays, young Adonis Johnson Creed), and still playing plenty of respect to the man who made it happen (Sly, of course).

Coogler’s film does the near-impossible — it pays serious homage to the previous series, while looking forward to the future — leaving everyone satisfied in its wake. A formidable sports story bolstered by one hell of a pedigree and a star turn performance from Jordan (who already announced his talents with his previous Coogler collab, “Fruitvale Station”), “Creed” is even better when considered part of an — admittedly — checkered series of films. We can’t wait to see more. — KE

The Spider-Man swinging action was always tailor-made for Sam Raimi’s exuberant swooping camera that distinguished his early low-budget genre work. By his second time on the dance floor with Spidey, Raimi’s had perfected this approach, applying a speed and agility on par with the character — particularly during the film’s electrifying set pieces. Raimi’s grip on the emotional core of the Peter Parker character (Tobey Maguire) is equally firm. Rather than delving into exposition and backstory, Parker’s struggle with his dual lives is baked into this film’s central conflict. The film’s real secret weapon, and where so many superhero films go wrong, is with its formidable and multidimensional villain, Dr. Octopus, played with diabolical deliciousness by Alfred Molina. – Chris O’Falt

Making sequels is hard. That’s not a rhetorical statement, but the underlying premise of “Ocean’s Twelve.” While “Ocean’s Eleven” was technically a remake of a god-awful ‘60s film, Soderbergh for all intents and purposes invented a franchise in which serialized sequels were always going to feel like less clever retreads – the entire act of even getting the same band back together feels like a betrayal of how “Ocean’s 11” ended, while the film’s plot was more procedural than fodder for an arcing narrative. But when a bunch of movie stars want to hang out in Europe and have fun making a movie together, you tend to figure it out.

Soderbergh’s films are always intrigued by process, which was perfect for a heist/con artist film. To involve us in the first film’s con artistry he perfectly dispensed information. The audience is kept a step ahead when there was a flaw in the plan and trouble was lurking, so our building tensions could be relieved by how flawlessly our heroes improvised their way out of jams. The viewer was the kept a step behind when Soderbergh wanted us guessing if a wrinkle was something they had accounted for in the master plan, and we’re forced to guess what’s play acting versus real as a scene unfolds.

In “Ocean’s 12” that dissemination of information is blurred, almost as if Soderbergh has less control and is less clockwork-like in his execution. You start wondering, “Did I miss something?” Before you start to realize, “Is he…?” “Am I…?” And then you watch it again to realize, Soderbergh had once again created something deceptively new in his examination of the genre and cinema itself. – CO

One of 2014’s greatest surprises was “John Wick,” because much like his on screen alter ego, you just can’t keep Keanu Reeves down. But it’s also easy enough for action sequels to lose the thread of what made them so successful in the first place in favor of bigger guns and bigger explosions. “John Wick 2” manages to build on what made the first film so great, namely fast cars, lots of guns and Keanu kicking plenty of ass, but it smartly expands the assassin’s world, giving a small peek behind the luxurious curtains at The Continental. Sure, the badass fights are even better (the shootout in a hall of mirrors is superbly executed), but there’s also an awesome “Matrix” reunion with Laurence Fishburne, laden with hints of Wick’s shadowy past as the history between the two teases itself to the surface. At the end of the movie you know Wick is a marked man, even more than even, but it only makes you want to see how he’ll shoot himself out of trouble even more. — JR

Page 2 of 4
Continue Reading: The 20 Best Sequels of the 21st Century

This Article is related to: Film and tagged fury road, Sequels, tentpoles, The Dark Knight