Beautiful endings, invigorating beginnings, and everything in between make up a year in television with a lasting impact. 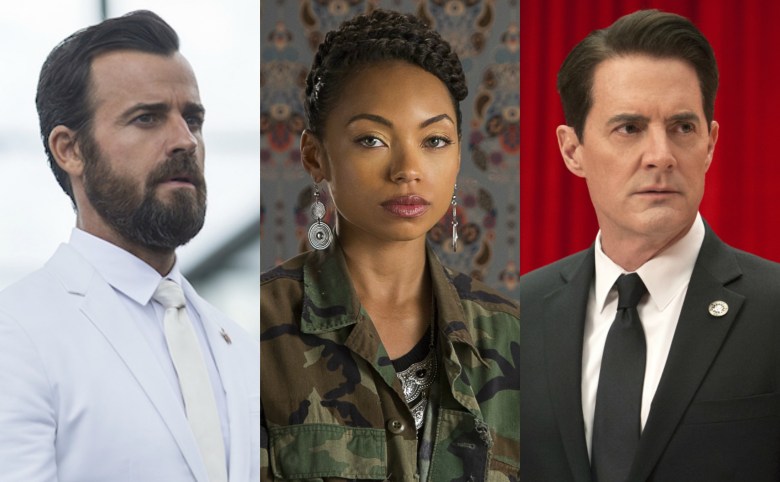 Television is a medium known for its personal connections and incomparable scope. The same set of characters can tell stories for decades, visiting your home upwards of 20 times per year for so many years they feel like family members. Daunting at the onset and comforting in the long-run, the best TV shows are the ones that stick with you because you stuck with them.

As more and more programming floods the airwaves, competition is rising. Seasons don’t have as many episodes. Shows don’t run for as many years. Greetings are savored because goodbyes are often just around the corner — or, at least, they feel like it.

So it should come as no surprise that time plays an integral role in the best television series of 2017. From the exciting new friends found in “American Vandal,” “Dear White People,” and “The Handmaid’s Tale,” to the beloved vanishing faces in “Halt and Catch Fire,” “Twin Peaks,” and “The Leftovers,” relevant relationships were forged, others fallen, and even more grew ever stronger.

“Better Call Saul” thrives as a prequel to a series that’s still in “Saul’s” future but cemented in the minds of each viewers’ past. “Master of None” lives in a three-minute window between life’s pinnacle and the soul’s nadir. “BoJack Horseman” knowingly contrasts weeks that fly by with the moments that live with you forever.

Every entry on the list below acknowledges the steady progress of time’s arrow while doing their damnedest to speed it up or slow it down for everyone watching. These 10 series left their mark on 2017, and thus history, as well. Time marches forward. These series march with them, thanks to the families who welcomed them into their homes, their lives, and themselves. Whether you see this four-hour mockumentary series as a commentary on the American justice system, an achingly funny look at the rhythms of high school life, the nefarious nature of social media, or as a superbly crafted dick joke that is its comedic and storytelling engine, “American Vandal” is a sublime TV experiment. True to its crime documentary ancestors all the way up to the final sequences, it’s also a fascinating look at how meta-narratives can shape the stories we see. When rallying cries for justice and searches for the truth intersect with instant cultural fame, the result is something that two people whether subject or creator can fully control. It’s a testament to the power that this comedy can have when it can sustain the momentum and promise of its premise for each of its intricately plotted eight episodes. An intercontinental story of the unforeseen pitfalls of getting what you want, “Master of None” continued to turn desire and disappointment into a modern TV high-wire act. Finding creative success in far-flung homages and intimate family stories, “Master of None” took Dev’s story and wove it even deeper into the fabric of New York City itself (albeit with some diversions through the streets of Italy along the way). From the black-and-white opening to the deep red interiors of a possibly requited love, this series continues to use romance as driving force, looking at what the journey to find companionship means in a changing world. With some of the year’s best collaborators in Melina Matsoukas and Lena Waithe, Aziz Ansari and Alan Yang continue to help break season-long TV storytelling from its conventions. At this point, “Better Call Saul” reminds us of those Olympic gymnasts who get overlooked, because they’re so damn flawless that they make it look easy. Anchored by Bob Odenkirk’s brilliant and subtle work as a leading man, the “Breaking Bad” prequel has managed to subvert expectations a hundred times over with its extraordinary character-oriented storytelling, while perhaps even surpassing its mother series with its focus on the sort of details which elevate the otherwise ordinary sort of drama.

Try to describe “Better Call Saul” to a civilian, and all you’re really able to say is “it’s a show about lawyers.” But that does a disservice to the immensely complicated ethical dilemmas that these characters grapple with every episode. Season 3 never failed to challenge Jimmy, Kim, and Chuck with the sorts of questions a more basic show would never invoke. This is a show which is obsessed by the nooks and crannies of humanity’s best and worst aspects, and the result is fascinating viewing. The final season of “Halt and Catch Fire” did the impossible, again and again, without ever conveying the slightest strain. It was about the technology industry, but it was really about people. It was an intimate character study, but it was also a heart-pounding thriller. It was life, basically, but one that doesn’t have to end.

Christopher C. Rogers and Christopher Cantwell’s journey through the ’80s and into the ’90s played out accordingly — like a never-ending melody; an endless story wrapped up in 10 episodes, and that has an ending that’s really a beginning. “Halt and Catch Fire” was always about so much more than business, but by the end it used the shared passion of these five people to connect them in ways rarely captured with such intricate understanding. It’s a beauty, and one that will live on for lifetimes. There’s no doubt that Justin Simien’s Netflix show is woke, but what makes this series, which is based on his acclaimed 2014 film, essential viewing is that it questions whether being woke is enough when racism shows no sign of abating; when black lives are still being lost to white policemen. It’s the televised version of taking a knee or using a hashtag — far more articulate but equally misunderstood.

Fairly quickly the show disabuses viewers of the dearly held notion that “Dear White People” is only aimed at addressing white people. With the eloquence of spoken word, the show explodes identity politics in every quadrant, and the result is devastating, hilarious, heartbreaking, contemplative, and infuriating all at once. It speaks with a clear voice to point out how much is ambiguous and fuzzy. It brings home the idea that in today’s world especially, passion is a prerequisite in political matters, but precision is not. After spending the better part of three seasons pondering what it is that forces anyone into a life of isolation, much less a former TV star who’s fallen on hard times, Season 4 of “BoJack” doubled down on family. Mining the literal depths of LA (where one particularly memorable underground episode was staged), it kept the self-aware industry DNA of the series while supplementing it with the same kind of thoughtful ruminations on human nature that have made this a show of incredible depth for the length of its Netflix run. With the usual outstanding voice work from Will Arnett, Amy Sedaris, and Aaron Paul, alongside freshman standouts Andre Braugher and Aparna Nancherla, no show sounds, looks, or punches you in the gut quite like “BoJack” does. Hope may be at a premium, but somehow this show makes it an even more valuable commodity in Hollywoo. This was not an easy show to watch. That’s a good thing. This stark, shocking, and still beautiful adaptation of Margaret Atwood’s classic novel demanded that its characters “keep their fucking shit together” during the bleakest of times, and it was a message that was also passed along to the audience. During another year, this show might have had less of an impact, but in 2017, watching “The Handmaid’s Tale” ended up feeling like a primal scream; one which echoed back in a way to make us feel heard. And it also just so happened to be beautifully acted, written, and directed, every step of the way. The fact that the Emmy-winning drama isn’t a limited series, but an ongoing story is fascinating because we’re only going to go deeper into the darkness this show explores. But we’re also going to get more glimpses of the hope underneath each episode; the hope needed to keep going.

This Article is related to: Television and tagged Lists, The Leftovers, Year in Review 2017