Jesse Plemons and Cristin Milioti star in an episode that makes a major impact, particularly at the end of 2017. 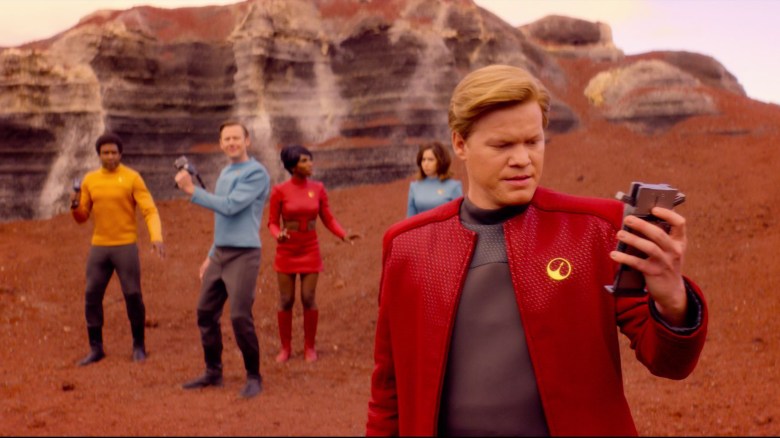 Perhaps one of the best moments of “USS Callister,” the opening salvo of “Black Mirror” Season 4, is the scene when the woebegone prisoners of Robert Daly (Jesse Plemons) reveal to their new compatriot Nanette (Cristin Milioti) that not only is she trapped in a virtual world, but she’s been stripped of the most basic human pleasures, thanks to Robert’s family-friendly code.

“How I miss taking a shit,” Elena (Milanka Brooks) mourns, as Nanette takes a peek downstairs to confirm the truth of what they’re saying.

“Stealing my pussy is a red fucking line,” she growls, and just under the wire, 2017 gains a new heroine for the ages.

Both Plemons and Milioti have shot to the top of our 2018 Emmys prediction charts with their work in this episode, but for very different reasons. Plemons does a masterful job of not just pulling off a fantastic William Shatner impression, but also shifting between the many personas of Daly, from subdued and bullied programmer to petty and vengeful god. However, Milioti is the central figure in a story that moves from sci-fi to horror to heist to action — which, despite the fact that it’s one of “Black Mirror’s” most fantastical entries, is also one of its most human and grounded installments to date.

“USS Callister” is split between the real world, where Robert, CTO of a highly advanced game company, works with a collection of people who either ignore or disregard him, and a fictional game universe inspired by “Space Fleet,” a “Star Trek”-esque TV show that Robert loves. Inside that virtual world are avatars cloned from the DNA of Robert’s co-workers, who Robert manipulates and abuses with the god-like powers being the programmer of the universe grants him. But when he chooses to add Nanette to the mix, things go topside.

There are some who might be put off by the initial depiction of Robert, especially his real-world schlub-y persona, which definitely pushes into the realm of stereotype. But what’s crucial about his initial scenes is that by and large, he comes off as a good guy, just one who gets pushed around a lot. The episode does the work necessary to earn our sympathy for him — which makes the turn, initially, such a harsh one. However, the point of the character isn’t that he’s a bad guy or a good guy, but rather that he represents the dark side of what can happen to a person subjected to a lifetime of emotional abuse. The sort of male rage that Robert personifies feels awfully familiar to anyone who’s ever made the mistake of looking at Twitter replies or reading a comments section. But it’s not reduced to tropes; thanks to the writing and Plemons’ performance, he feels truly grounded in reality (even when he’s at his most Shatner-y).

So many of the bullied become stronger, better people than those who hurt them. But sometimes, the bullied become bullies themselves, and the way in which “Callister” explores this is almost hard to watch — after all, we did feel so bad for Robert at first.

It’s natural to want to need an outlet for your frustrations and anger, a way to lash out at the world. This is Robert’s way, and there’s no denying that it’s wrong. But thanks to the initial foundation laid, we understand him just well enough to not forgive his actions, but not question why he might have chosen them. Meanwhile, when we first see Nanette in the real world, she’s a straightforward, honest, decent person with a full life — a programmer who just wants to do her job, and is excited to be working for Daly, whose coding she admires greatly. What she doesn’t want is to be harassed, or sucked into a fictional game world based on a decades-old sci-fi franchise where she’s forced to spout technobabble and kiss her captain/captor.

Fortunately, she’s smart and brave enough that when she finds herself trapped in Robert’s game, she’s able to resist. When Kabir (Paul G. Raymond) tells her that he’s already tried what she’s suggesting, all she says is “I haven’t” — and then she does what he couldn’t.

For the record, anyone who dares to suggest that Nanette utilizing her pre-established skill set as a programmer to save the day makes her a Mary Sue can go straight to hell, because that’s not at all who the character is. Instead, she’s simply a smart and capable woman, who goes from finding herself trapped in bizarre circumstances to using the tropes of a fictional universe to escape it.

The fact that Robert is keeping his prisoners in this particular cage is so essential to the episode, because while he’s established as a fan of “Space Fleet,” his love of the show is something he seemingly keeps to himself, something he makes into a possession rather than a passion. This makes for one of the most dangerous aspects of fandom, because the thing that takes one’s pure love for a story world and corrupts it is the idea of ownership. It’s what makes people bitter and possessive, trying to preserve their precious toys for themselves, rather than share the fun with others, and it’s what leads to the cruel questioning of new fans to ascertain whether they know “enough” to enjoy a Marvel comic or “Star Wars” movie — the idea that it’s possible to be a “fake” fan of something. It’s one thing to defend what you love, but it’s another to demand that people only love it on your terms. And yes, it’s often a gendered issue, most familiar as the “fake geek girl” concept that leads to women being interrogated as to whether or not they’re worthy of liking something — especially online.

It’s just one facet of the sort of toxic masculinity that has infected so much of online discourse, and what makes “Callister” so fascinating is that it takes that culture and then uses the tropes of fandom to tear it down and expose it for what it is — the worst impulses people who might have once struggled for acceptance, but now just want to be in control.

But at the end, the episode reveals what makes fandom great: Open things up, and the world becomes a beautiful thing to explore. Yeah, you might encounter the occasional jerk who sounds like Jesse from “Breaking Bad,” but that’s only one possibility for a life rich with potential opportunity.

And yes, it definitely doesn’t hurt that we get to see Nanette take the captain’s chair. It’s too simple to say that “USS Callister” is the hour of television we needed at the end of 2017. But it certainly was quite welcome. It’s unlikely we’ll ever see further adventures featuring this crew. But the final moments of the episode restore them to their full humanity, free of Robert’s control and ready to explore this brave new universe.