When it comes to holiday traditions, it appears that old habits "Die Hard." 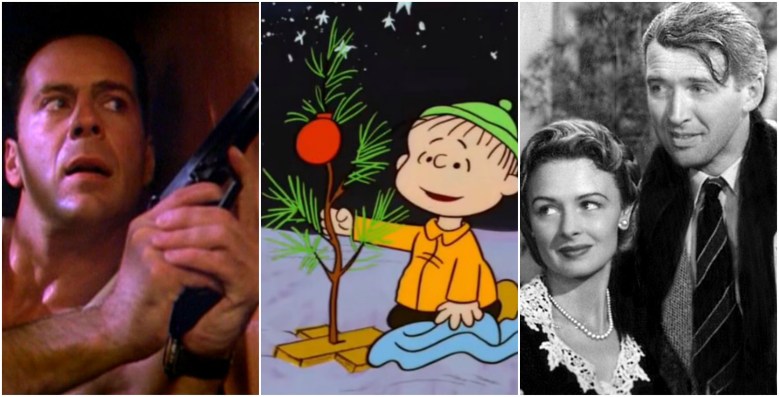 This week’s question: What are your winter holiday season viewing habits (that are not for work)? Do you have traditional go-to shows or movies? Are you looking forward to anything in particular?

As I have written in the past, I’m not the kind of critic who loves holiday specials. Too often, they’re too hokey, too commercial, too weird (yes, Bill Murray, I still don’t get “A Very Murray Christmas”) or, in the case of countless Hallmark Channel movies, way too white. But I do have a few holiday media traditions, starting with my Spotify Holiday Tunes playlist, which gets fired up as we’re putting up our tree and features lots of Vince Guaraldi’s nimble jazz trio on the soundtrack for “A Charlie Brown Christmas.”

Then, the kids and I must spend time with Jim Carrey’s Grinch in Ron Howard’s 2000 movie “Dr. Seuss’ How the Grinch Stole Christmas.” When this movie first came out, I’ll admit, I hated it. For a kid raised on the half-hour Chuck Jones cartoon narrated flawlessly by Boris Karloff in 1966, Howard and Carrey’s 104-minute film initially felt like a bloated indulgence. But as my misguided nostalgia fades each year, Carrey’s shtick gets funnier; he makes the character live in a way no other actor could have managed. Finally, no holiday is complete without viewing, either on Christmas Eve or the Day itself, the 1983 classic, “A Christmas Story.” Based on little Ralphie Peterson’s memories of Christmas in mid-1960s Indiana, the film is a wonderful send-up of all the little family dramas that break out during the season from the perspective of a smart-mouthed, 9-year-old kid. And Darren McGavin’s turn as his often crusty, occasionally sentimental dad — mostly referred to The Old Man — is a true post-modern Christmas classic.

Obviously I watch the “Friends” Thanksgiving episodes every Thanksgiving. It’s a ritual my friend and I have had for years. For Christmas, I usually consume a cocktail of the first two “Home Alone”s (sometimes I watch just for John Williams’ score), “The Holiday” and, much to Hanh’s chagrin, “Love Actually” (this is also my dad’s favorite and he once asked to watch it twice on Christmas). I’d be remiss if I don’t mention Christmas rom-coms by Hallmark et al. Yes, I’ve seen Netflix’s “A Christmas Prince.” No, I haven’t watched it for 18 straight days. But has no one else noticed how the king has two different birth years on the birth certificate and the tombstone?!?!?! It’s almost time for my annual viewing of “The Muppet Christmas Carol,” which by my logic is the best “Christmas Carol” adaptation of all time. Beyond that, it’s the continued screener slog as we get ready for TCAs. Perhaps the most notable thing, I suppose, is that in spending some time with my family, we’ll have to pick a few things to agree on for viewing — and even when your family gets along as well as mine does, that leads to discussion and sometimes compromise. (Though there are unexpected benefits. Last time I was home, my parents introduced me to “Battle Bots,” which is truly sublime programming.) The holiday tradition in our family is to pull out the NBC screener of “How Murray Saved Christmas,” a delightful, offbeat 2014 hour-long Christmas special from writer Mike Reiss (“The Simpsons”) that avoids the saccharine stain on many Christmas specials in favor of comedy. It’s the story of grumpy deli owner Murray Weiner who gets called to play Santa one Christmas when the real Santa is under the weather. The program is based on Reiss’ 2004 children’s book of the same name. Our 7-year-old loves it, and it doesn’t make his parents nuts as some Christmas shows for children do. And we go back to the DVD screener because after the year it debuted, NBC cut the show to 30 minutes so what airs this year (7:30 p.m. Dec. 24) is not the original program, which is available on DVD in its complete, original format.

Oh gosh, the holidays are for catching up on things I’ve missed throughout the year, and the shows I need to finish up this holiday season is longer than Santa’s naughty list. What am I going to unwrap this year? “The Americans”? “The Deuce”? “Lady Dynamite”? That show my friend said I had to see because it’s kind of like those other shows I sort of like? Those 14 shows on all the critics’ best of lists that I had never heard of? Oh no, how long is the winter break again? Not long enough! As a practicing — I’m bound to get better if I keep it up! — Jew, I’ll observe the traditional mitzvah of a movie and Chinese food on Christmas Day. This year’s Christmas movie remains TBD. I’ll probably also adhere to the traditions of watching bits and pieces of “Gremlins” or “Die Hard” when I happen to surf by them, but that’s mostly because they’re great movies and not really because they’re Christmas movies (though of course they are). Mostly, though, the holidays are just the time that I use to make sure I’m prepared for TCA press tour in January, so there’s very little time for viewing that isn’t work-related.

Stacked like planes at O’Hare International airport are my movie screeners that I plan on catching up with this holiday break. I never get to go to the movies! Now I can see what all the fuss is about “Lady Bird,” “War for The Planet of the Apes,” “Hostiles,” etc. I will rewatch FX’s “Better Things” only because it gave me the major maternal feels this season and ended on such a fantastic note. Also HBO’s “Curb Your Enthusiasm” will be rewatched because I can dine on the variations of “fuck” that Susie Essman’s character can toss out there. Not to mention reliving Lin-Manuel Miranda’s pas de deux with Larry over inadequate thank you’s and I’m sorry’s, Leon’s one-liners that fly like the speed if light and bear repeating and the swivel-headed classic move and look on Richard Lewis’ face when he was at Sammi’s wedding as the busty sign language lady began signing in the finale. The requisite Christmas movies too will be streamed: “The Bells of St. Mary’s,” “The Bishop’s Wife,” “Elf,” “Scrooged,” “Die Hard”…all the good’uns. For a long time, my holiday viewing habits have involved scaling what I refer to as Screener Mountain, where I try to get through as many new episodes as possible involving not only January TV premieres, but shows debuting in late winter and early spring that would be paneled at the Television Critics Association mid-season press tour. A couple of years ago, I actually counted how many potential hours of screeners I had to watch in late December; after the total passed 100, I curled up into a ball and stopped.

For the first time in a long time, I won’t be going to winter TCA so I can spend more time with my family, which means the Screener Mountain pressure’s not quite as intense, even though there will still be an absurd number of shows debuting shortly after the calendar turns to 2018. So instead my plan is to relax just a little, watch some more movies, new and old, with the kids, and maybe even step away from the screen altogether when things get really cold. I wonder what that’s like.

Ok, so I need to watch Season 2 of “The Crown” asap, but like probably a lot of folks on this survey, my holiday viewing time will be spent watching screeners of 2018 shows that are being paneled at the annual Television Critics Association Winter Press Tour this coming January in Pasadena. That means pilots and return episodes aplenty. “Waco,” “LA to Vegas”, “The X-Files,” “9-1-1,” “Alone Together,” and “The Resident” among them. Until they land on my desk (tick, tock, tick tock), I will try to feast on multiple airings of “Charlie Brown Christmas” on Blu-ray, Lifetime, Hallmark and Freeform holiday movies, and of course, “The Ref,” which is a FAR better Christmas movie than “Die Hard” ever was. Every year, I try to make time for “A Charlie Brown Christmas” and “It’s a Wonderful Life,” my two favorite Christmas-themed entertainments. Though I own both on DVD, if I happen to stumble upon either on TV, I’m always happy to watch through to the end.

But those are my only absolute mainstays. My general disposition toward Christmas-themed entertainment means that I’m always trying to watch as much STUFF as I possibly can, though I try to skip the truly execrable things. (This doesn’t always work out; one year, I ranked and rated every Rankin/Bass Christmas special, something I do not recommend.) This means that my DVR, already, is teeming with TCM Christmas movies I’ve never seen, random Hallmark stuff, and other programs I’ve never checked out before. Will this be the year I finally dig into “Christmas Comes to Pac-Land”? We’ll find out soon enough! (I am, after all, the cohost of a dumb Christmas podcast.)

I also try to take in at least one viewing of “A Christmas Carol” every year, though the version varies. And if I might, I’d like to recommend to all of you the early ’70s version from animator Richard Williams, which is one of my favorites. Ho ho ho! My traditions started a bit late, but there are now three things I can rely upon every Christmas. First, the Travers family goes to a movie on Christmas day. The movie does not have to be good. It does not have to be Christmas-y. It just has to be out and agreed upon by all (or most). Since the tradition began in 2009, the foursome (turned fivesome this year, congrats again, sis) has seen:

Odds seem high we’ll be seeing “Jumanji” this year, but I should move on: The second thing that happens every Christmas is that we all gather to watch “Love, Actually.” Now, it should be noted, while everyone is eager to relive Richard Curtis’ perfect holiday experience created for the betterment of humanity, the Travers family watches every year upon the insistence of my father, Mick. He’s a wonderful dad filled with a dad’s keen insight into narratives of every ilk, but he’s drawn repeatedly to the Syfy channel and sports, “The Wild Bunch” and golf, the History Channel and “The Walking Dead.” So that he loves “Love, Actually” more than just about anyone I’ve ever met, well, that’s pretty fantastic, and it speaks to the resonance of that film.

Now then, considering this is a TV topic and television is an essential part of all holidays (beyond the physical box needed to watch “Love, Actually”), the final Travers tradition is a personal one involving old “Friends” DVDs with the extended cuts of Christmas episodes, a very special episode of “The Leftovers,” and a bottle of rye whiskey. Merry Christmas, everyone. Enjoy it however you damn well please.

Other contenders: “The Crown,” “Dark,” “The Marvelous Mrs. Maisel,” and “Mr. Robot” (two votes each)

This Article is related to: Television and tagged A Charlie Brown Christmas, Criticwire Survey, Die Hard