Chau's complex role in Alexander Payne's latest has already garnered some controversy, but she's steadfast in her choices. She's right to be. 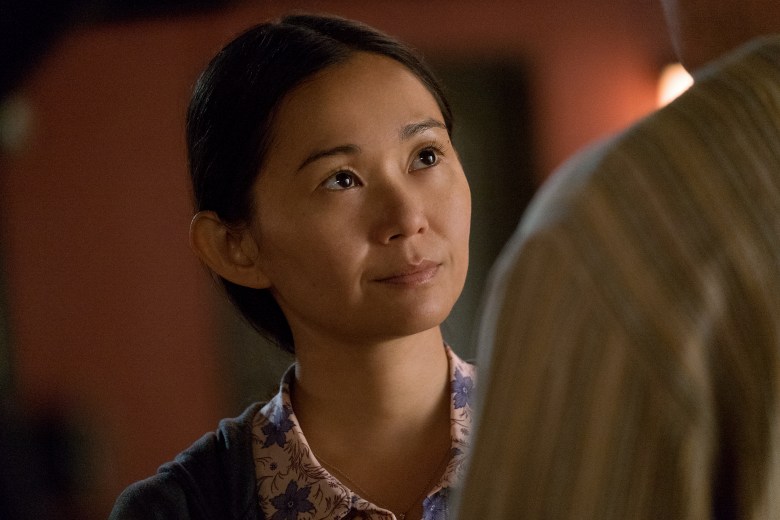 Hong Chau was an Alexander Payne fan first, a star second. The actress has already pulled in a trio of enviable nominations for her role in Payne’s latest movie “Downsizing,” thanks to recent nods for Best Supporting Actress from the Golden Globes, the Screen Actors Guild, and the Critics’ Choice Awards, but she’s still a bit dazzled by the whole affair.

As the steel-willed and good-hearted Ngoc Lan Tran, Chau proves to be the moral compass of a film that’s fundamentally about trying to do the right thing. Matt Damon stars alongside Chau as the down-and-out Paul Safranek, who undergoes the titular “downsizing” process to shrink himself down, all the better to conserve resources and live the high life on a fraction of “real world” cost. But what Paul finds in his newly small life surprises him, and it’s Chau’s character – a Vietnamese dissident bent on making the world a better place, even from a vulnerable position – that really upends his life.

“Downsizing” marks Chau’s first big role in a movie, but she’s no stranger to working with talented directors, including a supporting turn in Paul Thomas Anderson’s “Inherent Vice” and a regular role on Jean-Marc Vallée’s smash hit series “Big Little Lies.” She’s got a nose for good filmmakers, she actually sniffed out the “Downsizing” role herself. Chau first heard about the film when she read that Payne, one of her favorite directors, was gearing up to make a “sci-fi satire.” The combo sounded too weird and too good to miss, even just as a fan.

“I didn’t think there was a role in it for me, I just wanted to read it out of curiosity,” she said. “I was completely taken by surprise when, come page 35, there was this character for an Asian female. Not only that she was Asian and female, but she was complex and exciting and unlike any character I’ve seen in a movie.”

The Thai-born daughter of Vietnamese refugees – she was literally born in a refugee camp after her family fled the country – Chau was thrilled to discover a role that not only included details close to her own family’s experience, but one that found a room to include other important traits and experiences. “I think that a lot of actors of color have said that it’s a wonderful thing to play a role that doesn’t have a race, and that is kind of open to any sort of interpretation,” Chau said. “I completely understand that, but at the same time, I just want Asian characters that are well-written. I love characters that are written with a lot of specificity.”

The details matter to Chau, and she find that she gravitates more to roles that come alive, right off the page. “I don’t want to put on any gimmicky layers, just to give the character more definition,” she said. “I just want to play good characters, it doesn’t matter to me if it’s ‘open ethnicity’ or ‘specifically Asian.'”

Chau joked that she “hounded her managers” to get her an audition, and she eventually read for Payne’s long-time casting director John Jackson. “It was right before Thanksgiving, and he told me, ‘what you did was lovely, but you won’t hear anything for another two months,'” she remembered, as Payne was busy in Toronto prepping for the movie.

Two days later, Payne was flying down to Los Angeles to meet with Chau in a more informal setting – no audition, just a chat.

“A lot of times, directors will respond to somebody because they walked into the room exactly as that [role],” she said. “There’s a lot of safety in that, because you don’t have to worry that they’re not going to be authentic or not going to make authentic choices. For me, I was always kind of worried that I seemed a little too American for this role.”

Payne asked to meet again, this time for a more formal audition. That one went pretty well, too. “He told me in the room, ‘I’ve seen a lot of people, and you’re the only person who’s gotten the rhythm of my writing,'” Chau said. “And I thought, yeah, man, so hire me!“

Still diplomatic, Payne said Chau was the frontrunner, but he only felt it was right to see other auditions first. “I’m glad that he did, because I always like for a director to feel like they’ve seen every person that they can possibly see,” she said. About a week later, Payne called her directly to offer her the role.

Although Chau was initially worried about scanning as “too American” for Payne, she fine-tuned an accent to use when speaking as Ngoc Lan, one befitting a Vietnamese person who grew up in her native land and eventually adopted English as a second language. As someone who grew up in a family of people just like Ngoc Lan, Chau pulled from her own experience.

Still, that accent has garnered a bit of controversy since the film first started making the festival rounds during the fall season. In a Telluride wrap-up, Variety noted that Chau’s work “entered problematic territory for many as some have noted that its broad strokes veer into the realm of stereotype.” ScreenCrush’s review called Ngoc Lan an “icky, racist caricature.” Chau has been asked about it repeatedly, but she’s steadfast in her choices.

“What I did in the audition is pretty much what you see in the movie,” she said. “I grew up around Vietnamese refugees, around people who don’t speak English as a first language. It is a heightened character, it’s not a documentary, I wasn’t pulling directly from any one person.” She added, “The character isn’t just the accent, it’s also everything that she is saying.”

Chau isn’t afraid of talking about some of the more unique demands of her performance, and she’s eager to dig into yet another aspect of the role: she’s an able-bodied person playing someone disabled, as Ngoc Lan is an amputee with a horrific backstory. Approaching that with respect was paramount to her.

“What I love about this character is, a lot of people have been talking about the Asian female part, but they haven’t really talked so much about being a disabled person,” Chau said. “That was the huge responsibility that I felt, it wasn’t so much about, ‘oh, this is an Asian character, so I need to do it this way or that way,’ or that it was specifically a disabled character. It was all those things, and yet the focus of the story wasn’t about any one of those things, it just took somebody as they were and let them be the character.”

Chau worked with an amputee consultant out of Toronto, and the actress accompanied her on a visit to the same rehabilitation center where she had undertaken her own rehab. The consultant’s own experience also uniquely mirrored that of Ngoc Lan – she had only been an amputee for about five years, and she too had lost her left leg below the knee.

“I felt very grateful, because she was so generous with sharing so much of her personal story,” Chau said. “Because you go in there, and you’re an able-bodied person and you’re amongst all these people who actually need to be there for real, for rehabilitation, and you sort of feel like an ass. But they didn’t make me feel that way.”

As ever, it all goes back to the writing, and Chau is passionate when enumerating on the many ways in which Ngoc Lan goes far beyond stereotypes or shortcuts to deliver a full character that the actress speaks of with near-reverence.

“I don’t think we’ve ever seen a story with a character with a disability who is resilient, who is so capable, and who has a sense of purpose in life and isn’t really questioning or pitying themselves,” Chau said. “She is a person that demands things, but also needs help. She is the most vulnerable person, but she’s also the least afraid.”

This Article is related to: Awards and tagged Alexander Payne, Consider This, Downsizing, Hong Chau