A Best Picture fake-out at the Oscars was far from the most jarring Hollywood reckoning of the past 12 months. 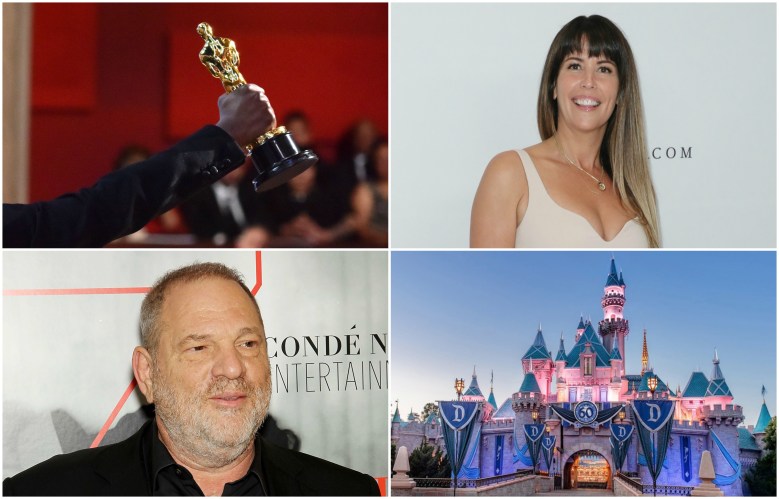 If 2016 was the year of celebrity deaths, 2017 was the year of celebrity careers (finally) felled by sexual misconduct. Between rising ticket prices, fewer commissioned original screenplays, and a new Republican administration, few expected the past 12 months to be easy on Hollywood. Still, it briefly looked like denying “Moonlight” a dignified Best Picture win would be the year’s biggest aberration. It wasn’t.

There was a lot to consider when compiling this list, from mergers to MoviePass and film stars continuing to flock to small screens. Despite many, many, dour headlines, the news was not all bad: a WGA strike was averted, “Wonder Woman” triumphed, we were given both Tiffany Haddish and Melissa McCarthy’s Sean Spicer impression. That’s just the start of the year that was.

Read ahead to see the issues that will continue to concern and captivate cinephiles in 2018. Arguably the biggest story of the year, and one indicative of the sea change taking hold throughout Hollywood. Early stories, like the harassment charges leveled at Cinefamily brass and claims against Ain’t It Cool News founder Harry Knowles and his associates at the Alamo Drafthouse, hinted that long-held secrets and whisper networks were about to burst to the surface, but few could have anticipated the wave of allegations against disgraced Weinstein Company co-founder Harvey Weinstein or the other revelations it would unearth.

The actual repercussions have similarly run the gamut, from firings and cancellations, to Ridley Scott’s unprecedented choice to recast Spacey in his “All the Money in the World” just weeks before the film was due to hit theaters. Scott’s gamble paid off – the film has already been nominated for a trio of Golden Globes – and it sets up the possibility that more accused abusers will be subject to similar erasure, especially as the tidal wave of stories shows no sign of abating. — Kate Erbland Balloons for sale at Disneyland

The biggest deal of the year wasn’t announced until mid-December, but it was staggering. Weeks after 21st Century Fox reportedly ended preliminary talks with Disney — negotiating instead with potential buyers Comcast and Verizon — there came news of a $52.4 billion acquisition by the Mouse House. This means that the most profitable studio of 2016 (Walt Disney Studios, overseer of Lucasfilm, Marvel, and Pixar) will merge with its third-place former competitor.

Pending approval from the FCC and Justice Department — which is expected to take about a year — Disney will own Fox’s film holdings at 20th Century Fox, plus cable channels like FX and National Geographic, regional sports channels, and Fox’s portions of Hulu and Sky. Only Fox Broadcasting, Fox News, Fox Business Network, and Fox Sports will remain 21st Century Fox entities, at least until the formation of an upcoming spinoff company.

Many questions remain, such as how involved 21st Century Fox’s octogenarian co-executive chairman, Rupert Murdoch, and his sons will be; the scope of anticipated layoffs; the fate of the Fox network; and whether independently-minded Fox Searchlight — backer of films such as “Little Miss Sunshine,” “Juno,” and “The Shape of Water” — has a future, particularly in making fare meant for traditional theatrical release. Disney will soon sever its agreement with Netflix to launch its own streaming service in 2019, and will need all the content it can get to woo devotees of other platforms. — Jenna Marotta

Hollywood is increasingly controlled by foreign companies and audiences The year’s final totals aren’t in yet, but nothing in 2017 changed the trend that U.S. studios (many heavily entangled with foreign ownership and significant financial participation) continue to regard the market outside the U.S. as their main target for their highest-budget films. That leads to a one-size-fits-all approach that favors the familiar, especially franchises and sequels. It has been counterbalanced by making lower-budget films that thrive in the U.S. with lesser overseas results, as well as finding a way to maximize some tentpoles (such as “Wonder Woman” and the “Star Wars” series) to have greater domestic appeal. The combination of domestic and foreign numbers often perform well enough to justify multi-hundred million budgets.

In addition, as of this month, the two largest theater chains in America are both owned by foreign entities. Britain’s CineWorld just pledged to pay $3.6 billion for Regal Entertainment Group, while Beijing-headquartered Wanda Group acquired AMC Theatres for $2.6 billion five years ago. — Tom Brueggemann

The concept of a subscription service offering unlimited (or one-a-day) movie tickets has been popular in Europe since the early aughts, and MoviePass itself has been in the U.S. for a few years. But in August — backed by a cash influx from their new owners — MoviePass slashed their prices to $9.95/month and sent shockwaves through the industry. In just four months, subscribers have gone from 20,000 to 1 million — projections are for 3 million by summer — while national chains like AMC freaked out that the lower price point was both financially unsustainable and a threat to the business of moviegoing. The MoviePass price point and subscription model appears to have encouraged millennials to go to movies again, and there’s ample data showing that MoviePass-like services double popcorn sales and movie-going itself. So whether you are skeptic or a fan, it would appear the MoviePass phenomenon will become an even bigger story in 2018. — Chris O’Falt Photo by David Bornfriend, courtesy of A24

“Moonlight” was many things to many people, but at the end of the day it was a heartbreaking film told in three gorgeous acts. While its bullet points do not define it, “Moonlight” is an indie film made for very little money, a black film from a black filmmaker, and a gay film about a young man grappling with the truth of his sexuality. Though it’s greater than the sum of its parts, “Moonlight” will always be the first ever LGBT-themed Best Picture winner, earning the statuette that other contenders — like “Brokeback Mountain,” which came close, and “Carol,” which wasn’t even nominated in the category — were never able to win, despite their critical adulation and enduring power.

The industry was opening doors before its win, but its monumental success proved that queer films really can go all the way at the industry’s biggest event, inevitably paving the way for more like-minded work to receive funding and attention in the future. As “Call Me by Your Name” enters the Oscar race with a very different kind of gay story, no one will doubt its chances or wonder if the content is too racy for older Oscar voters. That change has been a long time coming, and it’s never going back in the closet. — Jude Dry

Page 1 of 3
Continue Reading: The 11 Biggest Industry Changes of 2017: Harassment Accusations, ‘Get Out’ Is a Juggernaut, and More

This Article is related to: Film and tagged Amazon Studios, Sexual Harassment, The Academy, Year in Review 2017