"Maisel," "SMILF," and "Will & Grace" all snagged multiple nominations on the comedy front as "Mindhunter," "Veep," and "Godless" were blanked. 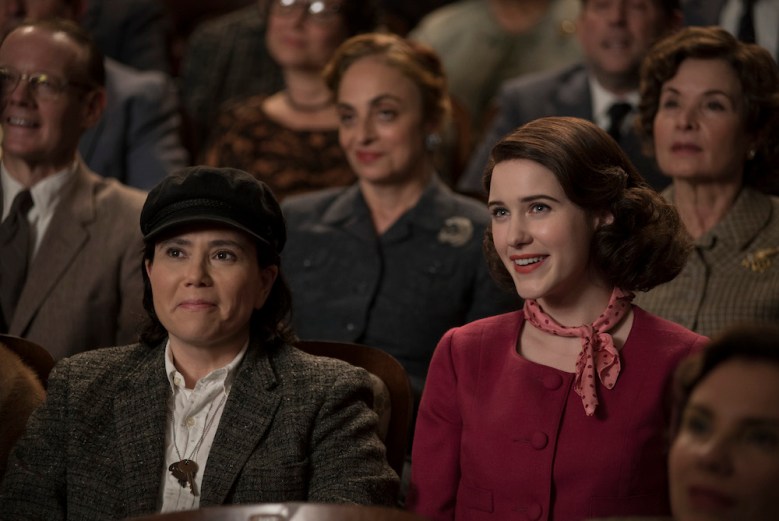 Year after year, the Golden Globes are always filled with surprises — more than most award shows, even. On the TV side, the Hollywood Foreign Press Association’s preference for new series and small member body makes for nominations some call exciting, others mind-boggling. This year was a bit more predictable — by Golden Globes standards — but still packed its fair share of twists and turns. From recent winners getting boxed out (Tracee Ellis Ross, “Blackish”) to new faces working their way in (Katherine Langford, “13 Reasons Why”), there’s quite a lot to dig into — so let’s get started on the snubs and surprises:

“Mindhunter”: Even with David Fincher’s backing, the breakout Netflix originals series couldn’t score a single nod from the Golden Globes.

“Twin Peaks”: Yes, Kyle MacLachlan earned a much-deserved nod, but the third best series of the year snagged no other nominations and was rudely left out of the Best Limited Series category.

“Veep”: The reigning Emmy champ for Best TV Comedy wasn’t just left out of the series race, but it was blanked overall. How the HFPA could ignore Julia Louis-Dreyfus is beyond us, but the series was never a huge Globes favorite. It’s earned seven nominations, but zero wins.

Tracee Ellis Ross, “Black-ish”: Of last year’s TV acting winners, only two remained eligible: Claire Foy, who nabbed another nod for “The Crown,” and Ross, who was shut out of the Lead Actress in a Comedy category.

“The Deuce”: If only one nomination was going to be given, we’re glad it went to Maggie Gyllenhaal, but it still seems wrong to keep this out of the Best Drama race (and for James Franco to only be up for “The Disaster Artist”).

“Godless”: Jeff Daniels couldn’t even break through for Netflix’s Western limited series, as the critical favorite was blanked. “The Good Place”: Are you forking kidding me? No Ted Danson? (And the HFPA even invited Kristen Bell to help announce the nominees on Monday morning, only to snub her show!) Despite critical raves, the NBC comedy was set aside for another more popular NBC comedy, “Will & Grace.”

“American Horror Story: Cult”: As the limited series gets tougher and tougher to crack, Ryan Murphy’s FX veteran is finding it harder and harder to break through. This is the second year in a row it’s been snubbed, after Lady Gaga won in 2016.

“Transparent”: The Amazon original series and its star, Jeffrey Tambor, had been nominated every season, but the recent scandal surrounding the show proved too much for the HFPA to recognize Season 4.

“The Leftovers”: One final awards show, one final snub for “The Leftovers.” Damon Lindelof and Tom Perrotta’s HBO series never gained the traction it deserved at the Globes or Emmys, but it will forever live on as one of the greats in our hearts. (And, side note: How did “Fargo” get all that love but Carrie Coon was kept out for both that and this?)

“Halt and Catch Fire”: Apparently the HFPA didn’t stay home on Saturday nights to watch the final season of this beautiful show. Well, it’s their loss. “The Marvelous Mrs. Maisel”: Many predicted the new Amazon series to delight HFPA voters, but few saw such a strong showing. Rachel Brosnahan landed a Best Actress nomination and the series made it into the Best Musical or Comedy category, proving the power of both Amazon (at the Globes) and “Gilmore Girls” creator Amy Sherman-Palladino.

“SMILF”: Another popular pick before the nominations came out, Frankie Shaw’s Showtime series did very well Monday, pulling in Best Musical or Comedy Series and a slot for Shaw’s lead performance.

“Will & Grace”: OK, this isn’t that big of a surprise given the HFPA’s history with the NBC sitcom, but it’s still a bit surprising to see the series pop up in 2017 — and so prominently. It’s a Best Comedy Series nominee, and “Veep,” “GLOW,” and “Better Things” are not.

“Top of the Lake: China Girl”: Jane Campion’s SundanceTV limited series didn’t earn a lot of nominations, but it snagged the big one, beating out “Twin Peaks” and “American Horror Story” for Best Limited Series slot.

“The Wizard of Lies”: It’s not that surprising the Barry Levinson helmed HBO movie snuck into the Best Actor in a Limited Series or TV Movie race, but it is a bit surprising to see it pull multiple nods, for both De Niro and Michelle Pfeiffer.

Katherine Langford, “13 Reasons Why”: The breakout Netflix drama earned a surprise nod for its female lead, beating out stiff competition from inside the network (Winona Ryder for “Stranger Things”) and outside (Carrie Coon for “The Leftovers”).

Kevin Bacon, “I Love Dick”: A Golden Globe winner for the HBO movie “Taking Chance” (2010), Bacon landed his third nomination overall for an Amazon series that was otherwise blanked — at the Globes and elsewhere. Clearly, the HFPA didn’t forget the lamb.

David Thewlis, “Fargo”: Even considering how popular the FX limited series remained with the HFPA — in a year many expected it to dip — it’s exciting to see Thewlis get his due. The man made for one helluva villain, and the Globes haven’t forgotten those teeth.

“The Handmaid’s Tale,” “Feud: Bette & Joan,” and “Big Little Lies”: OK, these aren’t surprises. All three shows have been dominating awards shows, critics’ lists, and cultural conversation since they debuted earlier this year, but they’re still new shows, and you never really know how new shows will play with a voting body — especially one as small as the Hollywood Foreign Press Association. Congratulations are in order — “Big Little Lies” leads in overall nominations — even if these three seemed like sure things.

The 75th Golden Globe Awards, hosted by Seth Meyers, will be held Sunday, January 7, 2017 at the Beverly Hilton Hotel and broadcast on NBC.

This Article is related to: Awards and tagged Golden Globes, Mindhunter, Netflix