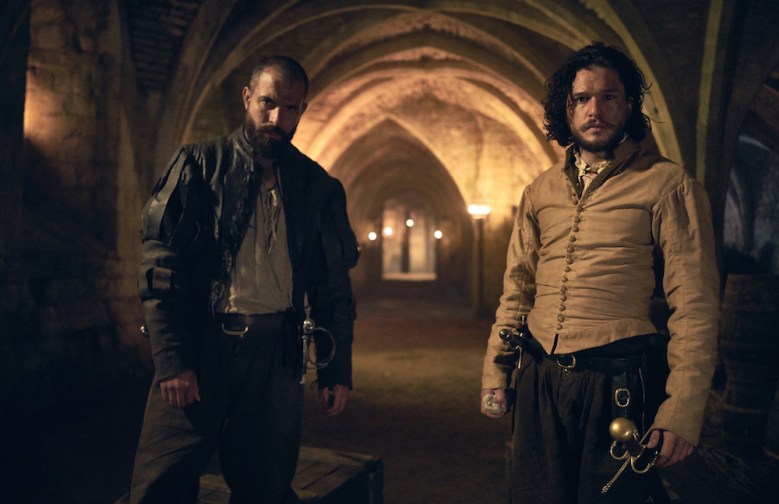 “Gunpowder” invites a lot of comparisons to “Game of Thrones.” Much of the three-hour series is spent watching Kit Harington swing his sword around, sport period garb while walking through castles, deliver stirring motivational speeches, and recruit an army to defend his fellow men from persecution. Future generations can look at .gifs of a grimacing Harington and guess, “‘Game of Thrones’ or ‘Gunpowder’?”

As fun as that sounds, the limited series deserves slightly more respect than such frivolity implies. It’s an earnestly made, well-told, true story about a group of 17th century Catholics who rebelled against a Protestant king that saw their faith as a threat and wanted them eliminated. Dragons do not belong here, nor should one wish for them to fly in and set the world ablaze.

But while “Gunpowder” tells its story clearly and respectably — previously unaware British viewers will see Guy Fawkes Day differently — its handsome presentation and effective plotting don’t add up to more than a dutiful shrug. Much like the failed Gunpowder Plot, this depiction of history from the perspective of the powerless fails to spark.

The first half-hour is torture — OK, it’s not torturous, but watching persecuted Catholics be tortured does become a bit of a slog, and remains so for most of the series. Those initial 30 minutes can be neatly categorized as anxiety-induced mental torture and visually charged physical torture. In its opening 15, the audience is asked to patiently wait through an arduous investigation, as a diplomat of the king, Sir William Wade (Shaun Dooley), pokes and prods around a suspected hideout for Catholics. Robert Catesby (Harington) and his fellow faithful watch in restrained dread as Wade and his goons politely dust up the place, but rather than a tense, dreadful sequence (a shot of a man casually knocking a book off a table captures the scene’s true level of intensity), it feels like a means to an end.

That’s because it is: The next scene finds Robert watching in restrained anger as his captured Catholic cohorts are tortured in the town square. (Torture is one theme that’s hard to miss.) One unfortunate woman is stripped naked and slowly crushed with metal weights, quickly establishing a bro-heavy story made with similar sensitivities toward nudity and violence as “Game of Thrones” (i.e. “Gunpowder” ain’t for the prudish). The point of all this is to illustrate why Robert does what he does next: gather an army, start a rebellion, and try to kill the king. Liv Tyler is in “Gunpowder,” her first TV role since “The Leftovers.”

Whether the writers (Ronan Bennett, Daniel West, and Harington himself) needed to spend one-sixth of the series establishing Robert’s motivation isn’t really the question, but how the storytellers use that time is a bit more problematic: “Gunpowder” deals in blunt force trauma, but — like the death-by-weights — it’s unnecessarily drawn out. You feel the minutes ticking by, except (unlike the weights) you’re not supposed to; Even at just three hours, the series could’ve used some additional cuts. Had it been a TV movie, it would’ve been one of HBO’s better entries in recent memory. (That “Gunpowder” originally aired on BBC One means that was never really an option for HBO, but the point stands.)

Harington and his co-stars do what they can to elevate the importance of the extraneous moments. Pretty much across the board, the performances are at least solidly serviceable and at most passionately gripping. Harington doesn’t have to stray too far from his longest-running role, Jon Snow, but that he’s well-suited for the part shouldn’t be a strike against him. Be it a part right in his sweet spot or a personal motivation to serve this story — Harington is a descendant of the real Robert Catesby — he carries the series, even when he’s not playing history’s most well-known character.

And that brings us to Guy Fawkes (played with spitting commitment by Tom Cullen): “Gunpowder” doesn’t really know what to do with him. The most well-known figure of the story gets a killer introduction to close the first hour, but drifts in and out of the series like a scary ghost. Is he a man to be feared? A regrettable recruit? A misunderstood student of the cause? He’s always been known more as the face of the failed Gunpowder Plot than the key orchestrater, but the series presents him as both a vicious brute and an admirable martyr. It’s as though the writers thought, “OK, people think Guy Fawkes is a fool for getting caught, so let’s repair a 400-year-old bad rap by making him mega-jacked and ardent to the point of insanity.”

Though not the story’s focus, Guy becomes a slight distraction. Similar lapses stack up over time (villainous caricatures, underdeveloped women), allowing the viewer’s mind to wander. That’s far from a damning sin, but it’s enough to recognize “Gunpowder” could’ve been better. Harington fans will be happy to see him back on HBO before “Game of Thrones” returns, but the series may draw the line between fans of the actor and fans of his action-packed fantasy show. Anyone wishing for a dragon cameo should check yourself, but that won’t stop you from thinking about it.

This Article is related to: Television and tagged Gunpowder, Kit Harington, TV Reviews