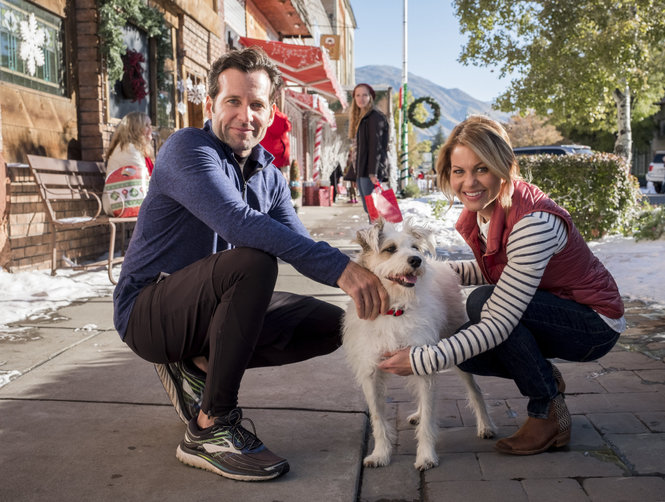 Christmas + romance + cute puppies = A recipe for ratings success at Hallmark. The network known for its sappy made-for-TV movies hit it big over the Thanksgiving weekend with five nights of ratings gifts — making for its biggest week in network history. Among total viewers in cable, only “The Walking Dead” (and its companion “Talking Dead”) and NFL football did better than Hallmark’s Friday, Saturday, and Sunday movies.

The film “Switched for Christmas,” starring Candace Cameron Bure as identical twin sisters who swap lives for the holiday, became the most-watched telecast in Hallmark Channel history on Sunday night. The film averaged 5.8 million viewers after three days of DVR and video on demand usage. Mark Deklin, Eion Bailey, and Happy the Dog — see, it ticked all the Hallmark boxes — also starred.

Close behind, Saturday’s “Hallmark Hall of Fame” presentation, “The Christmas Train,” averaged 5.6 million viewers — beating the four broadcast networks on the night. The movie was simulcast on Hallmark Movies & Mysteries channel, giving it an unduplicated audience of 8.5 million viewers. Dermot Mulroney, Kimberly Williams-Paisley, Danny Glover and Joan Cusack starred in the film, about a journalist who “embarks on a cross-country train ride at Christmas having no idea this journey will take him into the rugged terrain of his own heart.” Overall, thanks to a five-night Thanksgiving event, Hallmark enjoyed its most-watched week of all time, across all demographics. Hallmark knows its sweet spot: It’s been premiering this year’s original holiday movies since the end of October, as part of its “Countdown to Christmas” campaign.

Meanwhile, the ninth week of the season (Nov. 20-26) saw several shows hop on to Xfinity’s VOD ranker, including Starz’s “The Girlfriend Experience,” NBC’s “The Brave” and CBS’ “Seal Team.”