Showrunner Bruce Miller also explained how author Margaret Atwood is more involved than ever in the Golden Globe-nominated adaptation of her classic novel. 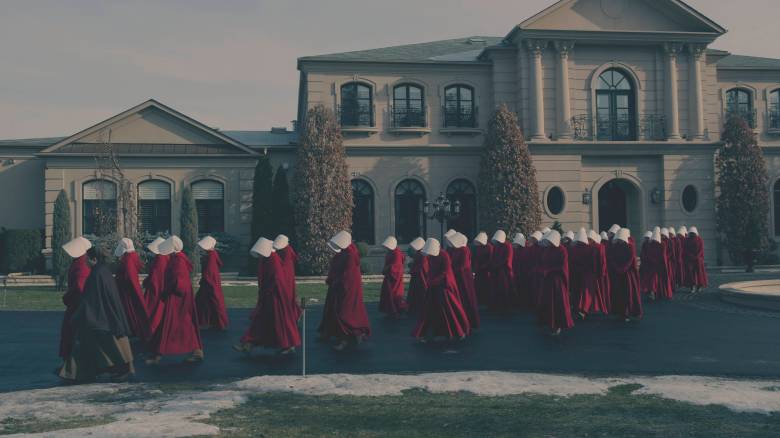 “The Handmaid’s Tale” showrunner Bruce Miller knows the show triggered “thousands of discussions” in its inaugural run — and as production continues on Season 2, Miller said he and his team have been paying attention to those conversations.

One major issue for the Emmy-winning Hulu series — nominated Monday for three Golden Globes — was that how to approach racial issues. While Margaret Atwood’s original novel took place in an all-white world (due to the ethnic purging orchestrated by the nightmare nation of Gilead), Miller and Atwood ended up making the decision to incorporate a diverse cast and focus on the treatment of women within this society.

“There was discussion and praise and criticism for how we integrated or dealt with race in Gilead,” he said. “It brought up a lot of questions that just didn’t come up in the stories in Season 1, that we were able to put it in front of our heads and figure out ways to focus on in Season 2.”

Miller praised the fact that so many of these discussions have been so thoughtful and respectful “that it has been education, and you want to take that education moving forward into the second season. I’m in awe of our fans, and how meticulous and how thoughtful they are about the show.”

He said that fan reaction — which he doesn’t necessarily consider to be criticism — has been a huge resource for Season 2.

“It’s the way people respond to the show, and whether that was your intention or not, and whether you want to change that response,” he told IndieWire the morning of the Globes announcement. “I think we, like any other show, missed lots of opportunities. That’s the whole point of moving onto Season 2 and 3, you can keep trying to improve and expand the world and cover more ground and cover more things that you weren’t able to cover in Season 1 or didn’t know would be that interesting.” That said, don’t expect major changes to other controversial elements, like the show’s love for bold music cues, such as the inclusion of Simple Minds’ “Don’t You Forget About Me” or Jefferson Airplane’s “White Rabbit.” “Some people loved it and some people really didn’t like it. So that doesn’t really help you move in a direction,” Miller said. “That’s the way the music is going to be in our shows where you’re going to love it or hate it and we can’t really worry about it.”

The Hollywood Foreign Press Association appeared not to mind those needle drops: The show has been nominated in the Outstanding Drama category, and also landed acting nods for Elisabeth Moss and Ann Dowd.

On Monday morning the cast and crew were hard at work on the Toronto set, and thus got to share in the announcement together. “It was great. We were in the middle of a take, which is hilarious — Lizzy and Yvonne were in the middle of scowling at each other as June and Serena and we got this news,” Miller said. “It was fun, it doesn’t always happen that you get to share it with everybody who works so hard to make it happen.” “Handmaid’s Tale” is currently about halfway through shooting next season, with episodes starting to come together in post — which makes getting awards news about Season 1 a bit of a surprise. “My head is so in Season 2, then you get this amazing honor about Season 1 and you’re like, ‘oh yeah, there was a Season 1, oh I forget,'” Miller said. “You’re so worried about the minutiae of Season 2 you forget about everything else in the world.”

Being recognized by the Television Academy, with its 20,000-plus membership, is very different from the Hollywood Foreign Press Association, with a voting body of perhaps 90 international journalists. “Because our show has so many political overtones about what it means to be an American, it’s interesting for me to have the foreign press be such champions from the beginning,” Miller said. “It’s not easy to predict whether something is going to translate to another world, another political system. The [HFPA] has been lovely in terms of opening that door for us and communicating what the show is.”

Miller confirmed that Atwood has been just as involved this season as she was last time, even though much of the original novel’s plot was covered by those first ten episodes. “I think she’s busier than me and you put together — I’m perusing her opinion more than she has time, sometimes. But I think we are very lucky that she is involved and thoughtful and really appreciates the show and excited by the new directions we’re taking things in and very careful about reminding us of things.”

In addition, Miller noted that “we don’t make very many changes from the book but when we do change something, she talks those through with me. She is a remarkable work colleague. She really is and she always makes time, even with her busy schedule, to read stuff and send her thoughts.

“So she’s very involved and I hope all the way, will continue to be all the way through the future,” he said. “She’s really the mother of us all in this project.” As Season 2 progresses deeper into the world of Gilead, the show is forging its own story beyond the events of the book, something that Miller said “doesn’t feel as scary as I imagined it would feel. I do feel like so much of the first season was about building the world — that world building is just what we’re continuing.

“It’s very much a world built by Margaret, and we’ve been able to kind of take areas and little things that she’s mentioned and bring them to life. And that has been energizing and also it just makes you realize how well constructed her stories are. That the world, as we expand it, holds up incredibly well. What is their penal system like, what is going on in the ex-pat community. All those things that she mentions in the book and we’ve expanded on are on such strong footing because Margaret thought them through so precisely,” he said.

One of those new areas being visited in the second season is the much-feared Colonies: “They play a substantial role in Season 2. We just finished doing a quite long location shoot up there and it was incredible, the production design and the location we were able to find, building that terrible world,” Miller said. “It was raining, it was muddy and awful. Just like I imagine the real Colonies would be. And everybody had both good cheer and incredible professionalism all the way through. Which is a testament to the crew — even a spectacular crew sometimes gets grumpy, but ours is very un-grumpy. They definitely make a bad situation better, not worse.”

This Article is related to: Television and tagged Bruce Miller, Margaret Atwood, The Handmaid's Tale