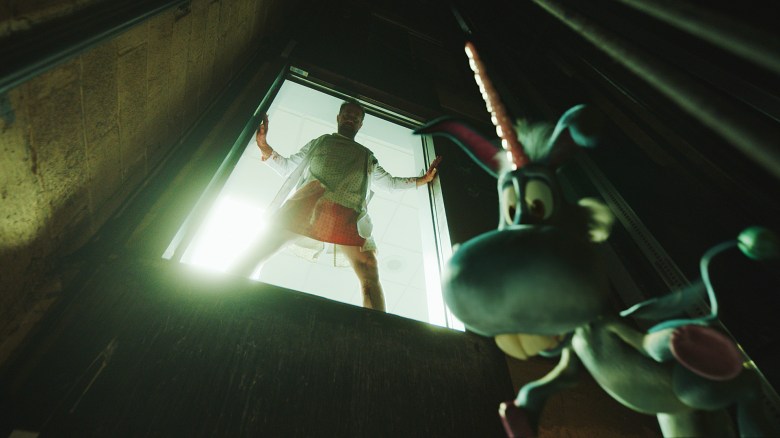 Patton Oswalt defines the protagonist in Syfy’s new comedic thriller “Happy!” by referencing a classic buddy picture. “Remember in ‘Midnight Run,’ when Charles Grodin is telling DeNiro, ‘the reason you have an ulcer is that you have two modes of expression: Silence and rage’? That’s Nick Sax,” Oswalt told co-star Christopher Meloni, who plays the lead character. “It’s either glowering silence and then just explosive and it’s hilarious.”

It’s not a bad way to sum up the relationship between Meloni’s and Oswalt’s chatacters in “Happy!”, which premieres this Wednesday. But here’s the big difference: Rather than playing somewhat sane humans, Meloni stars as incredibly unstable private investigator Nick Sax, and Oswalt is the voice of Happy, a CGI flying unicorn who is either a figment of Nick’s imagination or the manifestation of a little girl’s imaginary friend.

Either way, only Nick can see Happy, which proves to be a complication as Nick tries to evade angry gangsters and other dangers. For Meloni, interacting with Happy’s placement was another sort of complication, because Oswalt wasn’t on the set during production.

Instead, Oswalt recorded his dialogue remotely in Los Angeles — but he did so while interacting with Meloni via Skype. “It really helped having him on Skype. He wasn’t just filling in lines, he was being Nick Sax and dragging me through it, which is what is happening to Happy,” Oswalt said. “I’m stuck with this guy who’s very intense and very frightening, and so that I feel I got a different performance than I would’ve normally had.” Not only did it help guide Oswalt’s performance, but Meloni also ended up using it when they actually shot those scenes. “You were running and working out some stuff that you might do on the set,” Oswalt said to Meloni during the interview. “In a way, it was a good dry run for him to figure out how fucking crazy he could get.”

While the Skype sessions worked, Oswalt hopes that in future seasons he’ll be able to be on set — similar to how actor Charles Fleischer was on set, in a rabbit costume, while voicing the titular character of the 1989 film “Who Framed Roger Rabbit?”

“I wonder if that would’ve changed my performance, watching the action and then actually being in the middle of it?” Oswalt said. “Next season, I’ll dress in my little pony outfit.”

The characters of Nick and Happy still share a rapport together, which Oswalt attributed to both characters’ off-kilter personas in similar but different ways. “Both of us started out very unbalanced. I am way too optimistic. I think toxically optimistic. He is toxically dark and pessimistic. It’s almost like a mutant version of McCartney and Lennon,” Oswalt said. “But I am McCartney on ecstasy and he’s Lennon on PCP where it’s crank, no pun intended.”

The mention of “crank” might not be a coincidence, as “Happy!” director Brian Taylor’s first two films were the Jason Statham starrer “Crank” and “Crank: High Voltage.” It was a bold first play for the director, and the kinetic vibe of those films can definitely be felt in “Happy,” which came alive thanks to Taylor’s loose approach to making the show. “Brian and I, I swear I felt worked in one brain,” Meloni said. “He’s a 12-year-old boy that you’d smoke cigarettes behind the library with and then toss an M80 into the toilet.”

Added Oswalt: “And draws dicks on everything and wants his friends to see. ‘I drew a dick in the history book, Lincoln’s got a big boner.'”

Silliness aside, Meloni and Oswalt both deeply admired Taylor’s approach to filmmaking. “I’ll never forget, we’re shooting a scene and Brian wants a particular shot, and I said to him, not challenging him but just going, ‘well, we have this shot and that shot, do we really need this shot?'” Meloni said. “He goes, ‘No, but we’re gonna do it, why? Because we love making film.'” Laughing at that memory, Meloni continued: “I swear to ya, I just shut my mouth. I want to be infected by that attitude every moment that we’re shooting. I’ve done a lot of TV, and TV’s usually like [snapping his fingers] ‘come on, come on, come on, we’ve got a lot of things to do, so let’s get going.’ And this was, ‘let’s enjoy this, let’s revel in the art of film.'”

Oswalt was struck by the beauty of the series, even during its most depraved moments. “I was watching with my wife and she kept saying, ‘I cannot get over, as fucked up as this show is, how ridiculously beautiful it is.’ It is so beautifully shot that that’s what’s really unsettling. That was a gorgeous scene of a guy getting his intestine pulled out — but it was shot so beautifully. This is the kind of show that you can put on a big screen TV in a nightclub, with the sound off like wallpaper, because it looks so amazing.”

Oswalt said he was enthusiastic to be talking about the new series. “Oh, my God. I get to promote a show that I would be geeked out for in real life,” he said. “I really would — I’d be live tweeting it like, ‘hooooly shit! Hey listen west coast, I’m watching the east coast feed, I’m warning you at the 31 minute mark, oh my fucking god.’ Like that’ll be a lot of that.’ There’s gonna be a lot of ‘oh my fucking god,’ tweets about certain episodes. I can confidently say that.”

This Article is related to: Television and tagged Christopher Meloni, Happy!, Patton Oswalt