Weinstein says he never pressured the actress into filming a lesbian sex scene during the making of "Frida." 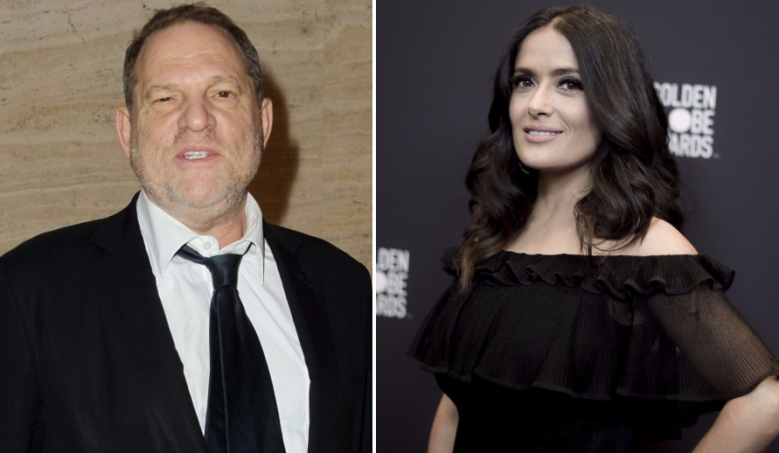 Harvey Weinstein has responded to a sexual harassment allegation made by Salma Hayek in a first-person article written for The New York Times. Weinstein denies Hayek’s claims, saying he “does not recall pressuring her” to film a lesbian sex scene for the movie “Frida.” He refers to the star as a “first-class actress” and says he was “very proud” of her when she landed a Best Actress Oscar nomination for “Frida.”

Hayek broke her silence against Weinstein in an article published December 13 entitled “Harvey Weinstein Is My Monster Too.” The actress said Weinstein would request to take showers with her and asked her to give him a massage, perform oral sex on her, and get naked with another woman, among other actions.

A majority of Hayek’s first-person chronicles her experiences working with Weinstein on the 2002 biopic “Frida.” The actress describes Weinstein’s “Machiavellian rage” and how he tried to kill the film because he felt Hayek couldn’t pull off a non-sexualized role. Weinstein allegedly forced Hayek to film a lesbian sex scene in order to make the film more sexual, and Hayek says she agreed to it out of fear that Weinstein would shut the entire film down if the scene wasn’t included.

Mr. Weinstein regards Salma Hayek as a first-class actress and cast her in several of his movies, among them “Once Upon a Time in Mexico,” “Dogma,” and “Studio 54.” He was very proud of her Best Actress Academy Award nomination for “Frida” and continues to support her work.

While Jennifer Lopez was interested in playing Frida and at the time was a bigger star, Mr. Weinstein overruled other investors to back Salma as the lead. Miramax put up half of the money and all of the P&A; the budget was over 12 million.  As in most collaborative projects, there was creative friction on Frida, but it served to drive the project to perfection. The movie opened in multiple theaters and was supported by a huge advertising campaign and an enormous Academy Awards budget.

Mr. Weinstein does not recall pressuring Salma to do a gratuitous sex scene with a female costar and he was not there for the filming. However, that was part of the story, as Frida Kahlo was bisexual and the more significant sex scene in the movie was choreographed by Ms. Hayek with Geoffrey Rush. The original uni-brow used was an issue because it diverted attention from the performances. All of the sexual allegations as portrayed by Salma are not accurate and others who witnessed the events have a different account of what transpired.

Ed Norton, who was Ms. Hayek’s boyfriend at the time, (worked with Mr. Weinstein on the rewrite of the script in Mexico) did a brilliant job of rewriting the script and Mr. Weinstein battled the WGA to get him a credit on the film. His effort was unsuccessful to everyone’s disappointment.

By Mr. Weinstein’s own admission, his boorish behavior following a screening of Frida was prompted by his disappointment in the cut of the movie—and a reason he took a firm hand in the final edit, alongside the very skilled director Julie Taymor.

This Article is related to: Film and tagged Harvey Weinstein, Salma Hayek