"Game of Thrones" may not come back until 2019, but HBO is more than making up for it with these exciting new and returning originals. 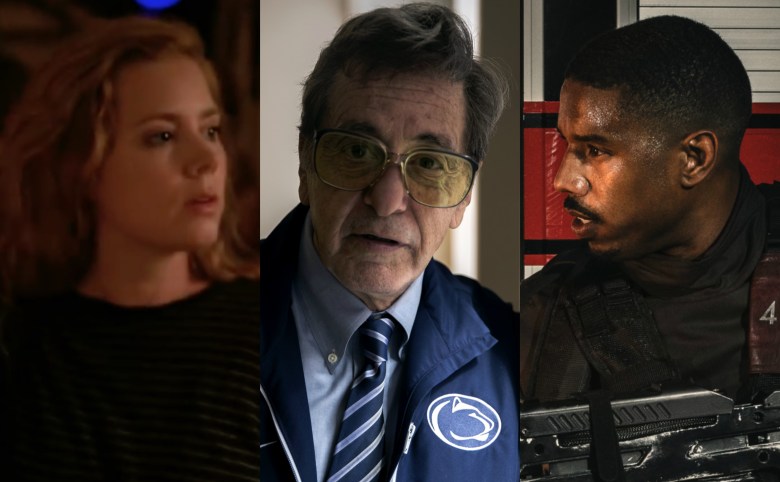 It’s only been six years since Penn St. football coach Joe Paterno — the one of the winningest college football coaches in history — was fired for failing to disclose information relating to assistant coach Jerry Sandusky’s continued abuse of young boys. Paterno died shortly after being terminated, and a day before the NCAA vacated the school’s wins from 1998 to 2011. So the topic is still fresh in the minds of many, making the upcoming HBO movie on the scandal a curious construction: What more needs to be said? What motivated Levinson to dig into the topic after tackling Bernie Madoff so well in HBO’s “The Wizard of Lies”? Why is Pacino eager to wear the giant glasses and don the Nittany Lions colors of a disgraced man? There’s so much drama here that what angle this group of talented creators takes should prove fascinating all by itself — and decide the impact of this sure-to-be hot button film. There’s not one thing about “Sharp Objects” that’s uninteresting, so let’s start with the premise: A crime reporter fresh out of a psychiatric hospital returns to her hometown to investigate the murder of two young girls. If that alone isn’t a helluva hook, know that it comes from a novel by Gillian Flynn, who also wrote “Gone Girl” and “Dark Places.” The aforementioned crime reporter is played by Amy Adams, and the whole limited series is directed by “Big Little Lies” helmer Jean-Marc Vallee. But hold on, there’s more: Flynn wrote some of the scripts, but “UnREAL” co-creator Marti Noxon wrote and developed the eight episodes overall. If that doesn’t sell you, then we only have two words left: Patricia. Clarkson. “Room 104” Season 1 was a bit of an experiment. Mark and Jay Duplass built an anthology series that allows for an array of voices telling new, unpredictable stories every week. Every episode is different except for the setting: a dingy hotel room. Some half-hour chunks were heartbreakingly sincere. Others were mind-bending horror shows. Season 2 will certainly keep pushing the creative boundaries in individual episodes and throughout the overall arc. As we learn the cast and creators, anticipation will only continue to build, but there’s nothing but upside now. “Insecure” only got better in Season 2. Issa Rae’s half-hour comedy is getting shaper, leaner, and more insightful, seemingly with every episode. That the TV Academy has yet to take note is as flabbergasting as it is frustrating, but fans have to be ecstatic with what they’re seeing. Season 3 is set up for even more exciting developments. We just have to hope the people handing out awards start paying attention. Listen, we know the concerns: “Big Little Lies” was an excellent limited series with one helluva ending. It’s pretty perfect as it is, but — given the people who are returning — there’s no good reason not to continue the show. Nicole Kidman is back, as a producer and star. So is Reese Witherspoon. Original writer David E. Kelley is returning, and the rest of the cast is in negotiations. Swapping out Jean Marc Vallee for Andrea Arnold is, at the very least, not a downgrade. So all the key parts are back in place. We have to trust creatives to do what they do best: create. Without the confidence to continue shown by past writers and directors who made something “perfect,” we wouldn’t have “The Godfather Part II” or “The Leftovers” Season 3. Let’s see what these folks can do. Things are moving right along for the third iteration of “True Detective”: HBO gave it the official green light in August 2017, announcing Mahershala Ali to star. He’ll be directed by series creator Nic Pizzolatto and Jeremy Saulnier. In November, the network confirmed Carmen Ejogo (“The Girlfriend Experience”) would be joining them, and the scripts have been hailed as “great” by HBO Programming President Casey Bloys. Rumors are swirling that production could start as early as the spring, making a late 2018 release not entirely out of the question. We won’t know for sure until HBO sets a date, but progress has been steady and encouraging at every turn. There’s still hope in this limited series, beyond just that we’ll see it this year. This is another one that may not be ready in 2018, but production is slated to begin in the spring on the five-part limited series. “Chernobyl” stars Jared Harris as Valery Lagasov, a Soviet Union scientist who was chosen by the Kremlin to investigate the 1986 nuclear disaster that resulted in 46 deaths and remains one of the worst man-made catastrophes in human history. The project will examine both the scope of the Ukraine-based accident and explore the individual lives of the men and women involved.

Call this one wishful thinking. Considering HBO hasn’t even officially picked up Damon Lindelof’s “Watchmen” adaptation to series, it’s probably a bit much to expect it in 2018. But things are moving right along, with the writers’ room opening in September and Lindelof writing the pilot in December. Considering how great things turned out for Lindelof’s last HBO venture — and how desperately “Watchmen” needs a proper onscreen adaptation — this is one we’ll be tracking closely. Whenever it’s ready, so are we.

This Article is related to: Television and tagged HBO, Mosaic, Paterno, Sharp Objects