The video was previously only available to Tidal members. 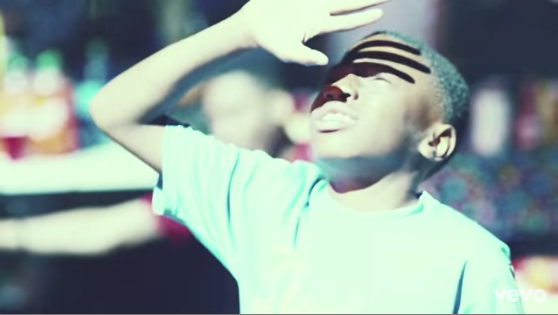 JAY-Z celebrated the conclusion of his 35-date “4:44” tour yesterday by making one of the album’s videos available to non-subscribers of his streaming service, Tidal. Now on YouTube is “Marcy Me,” directed by Elara Pictures’ Josh and Ben Safdie, the filmmaking brothers behind movies like “Heaven Knows What” and this year’s “Good Time.” The Safdies are native New Yorkers like the rapper, who was raised in the Marcy Houses, a project in Brooklyn’s Bedford-Stuyvesant neighborhood, referenced in the song’s title.

“Marcy Me” opens with two white, NYPD helicopter pilots who are combing the streets for a young suspect in a black hoodie, allegedly carrying a knife. Instead of finding their suspect, the officers — with their lurid searchlight — interrupt a friendly footrace, a kissing couple, and a low-key rooftop party. The video’s protagonist and stand-in of the rapper’s former self is a boy in a Dodgers jersey emblazoned with 47, the year Jackie Robinson joined the team and broke baseball’s color barrier.

Many well-known names helped translate “4:44” to the screen. Emmy-winning “Master of None” co-creator Alan Yang directed “Moonlight,” a video that recast “Friends” with six black actors (including Issa Rae and Lil Rey Howery). Susan Sarandon and Ron Perlman play a prison warden and inmate in the artist’s “Legacy” video. Meanwhile, Lupita Nyong’o and Mahershala Ali respectively starred in “MaNyfaCedGod” and “Adnis,” videos that coincided with the album’s bonus tracks.

Watch “Marcy Me” below.

This Article is related to: Film and tagged 4:44, Jay-Z, Music, The Safdie Brothers