The 'Next Generation' star, who established a reputation as one of TV's most versatile directors, says there's room for both 'Orville' and 'Discovery.' 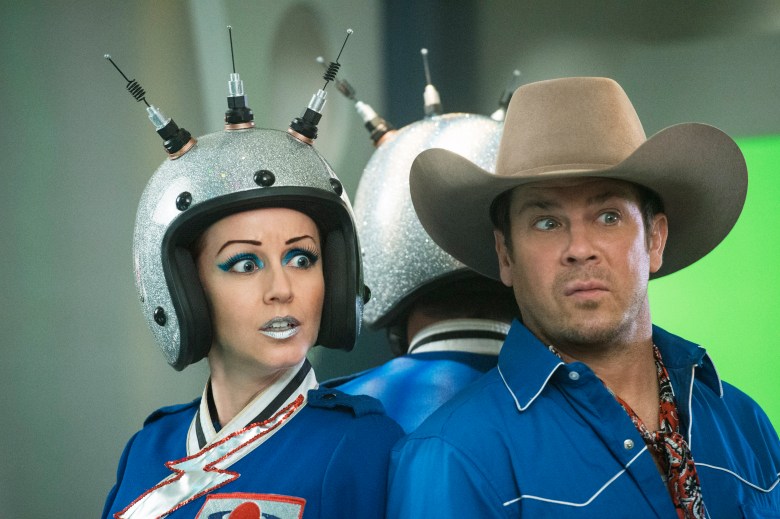 In case there’s any lingering debate between “The Orville” and “Star Trek: Discovery” fans, Jonathan Frakes has given his blessing to both.

Frakes might be most familiar to sci-fi fans as Commander William T. Riker, but the former star of “Star Trek: The Next Generation” has also been one of TV’s go-to directors for more than 27 years. Most recently, he was behind “The Librarians” episode “…And the Silver Screen,” an homage to classic Hollywood written by executive producer/star Noah Wyle.

In the episode, Flynn Carsen (Wyle) and his team find themselves sucked into a wild range of classic film genres, including ’40s film noir, B-movie sci-fi, and even a cowboy musical.

Mimicking a variety of styles is something that the veteran director is quite used to doing. In just the last year, Jonathan Frakes directed five episodes of television, including both “The Orville” and “Star Trek: Discovery,” perhaps serving as the ultimate bridge between the two fall TV homages to the “Star Trek” franchise. And according to Frakes, there’s room for both.

“Stylistically, your responsibility as an episodic television director [is] when you do a show like ‘The Orville,’ you want that show to look like ‘Next Generation,'” he said. “And when you go to Canada to do ‘Star Trek: Discovery,’ they want that show to have the feeling, and look, and vibe of the J.J. [Abrams]-era ‘Star Trek.’ Much more cinematic, a lot of crane work, and a lot of movement, a lot of dutch angles. On ‘Next Generation,’ the traditional framing, and the things we became accustomed to as fans of the show, we see in [‘The Orville’] because that’s the look.”

When it came to “The Orville,” Frakes said that “I was afraid that it was going to be like ‘Family Guy,’ and it’s not really, but it’s also not really as serious as ‘Next Generation.’ I think Seth [MacFarlane], and Brannon [Braga], and whoever else is involved in all this, they found a tone that clicks with this audience, either the millennial audience or the old school audience. Everyone is very pleasantly surprised at how well the show has been received. I’m happy to see the homage, and I’m happy to see success for whoever wants to steal good ideas.”

Added Frakes, “It was a very conscious, and I think quite successful, homage. ‘Orville’s’ coming back for a second season, so is ‘Discovery.’ There’s room, obviously, in the fans’ hearts for both types of ‘Star Trek.'”

As for “The Librarians,” the show — which tracks the extraordinary adventures of a team investigating weird and magical events in our world — is a continuation of a long-running franchise starring Noah Wyle that began in 2004. It stands out among cable TV offerings for its family-friendly approach.

“…And the Silver Screen,” was right in Wyle’s wheelhouse, Frakes said: “He’s a huge movie buff. He’s down to combine the genres.”

There are plenty of touches in “…And the Silver Screen” that film nerds will appreciate, such as the shifting of aspect ratios depending on the type of genre being depicted, including 4:3 for the film noir sections and full-on widescreen during the Western musical. Also, “we shot consciously day for night for the outdoor chaps in chaps,” Frakes said. “We did the campfire scene by day and it has that wonderful cheesy color timing in it, so it looks like Technicolor… [The episode is] filled with Easter eggs.”

And according to Frakes, the days spent shooting “…And the Silver Screen” were a lot of fun for both the cast and crew. “People on both sides of the camera were having a ball with this. The crew was fully engaged,” he said. “The cinematographer, Dave Connell, and the gaffer deal had a field day lighting old school black-and-white. They broke out all this equipment that they hadn’t used in a long time. The same is true for the costumers. It was one of those great opportunities where everybody making the show enjoyed it.”

The day they filmed the sci-fi homage, Frakes noted, was the same day that they shot their crew photo, meaning that enough staff was present to make the set feel like it had a live studio audience — just as they were preparing to film a big master shot.

“So I said [to the cast], ‘Do you guys want to perform for everybody?’ And they said, ‘Sure, let’s just go ahead and do it,'” he said. “And they did this long take of that scene, and the whole company applauded. It was like we were doing a play. It was a synchronous moment. The episode is very special for a lot of us.”

Frakes credited Wyle for what he believes is the best season yet of “The Librarians.”

“He’s become sort of this Orson Welles. He wrote, produced, directed, and starred, and he is the heart and soul. He is the Librarian, because he’s owned that part of Flynn Carsen since that first movie. That’s what’s kept the entire franchise alive.”

“The Librarians” airs Wednesdays on TNT, with back-to-back episodes on Dec. 27 at 8 p.m. Catch up on the TNT website now.

This Article is related to: Television and tagged Jonathan Frakes, Star Trek Discovery, The Librarians, The Orville