"Bodied" topped IndieWire's year end survey as the best undistributed movie of 2017. Here's how its filmmaker justifies the year's most provocative statement on free speech. 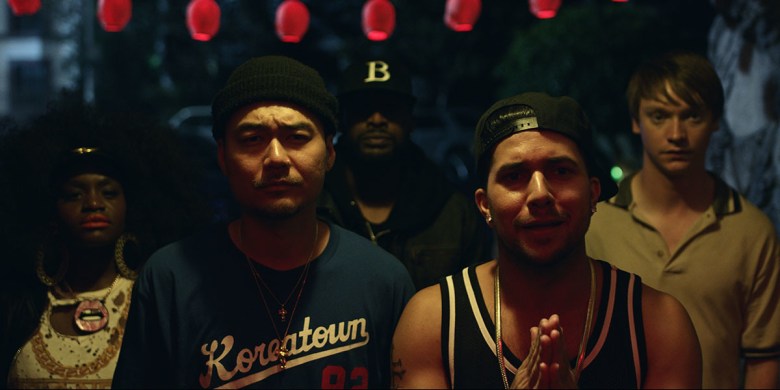 UPDATE (January 17, 2018): YouTube has announced it has acquired the rights to “Bodied.” It will have an exclusive sneak preview at Sundance 2018 before a theatrical release, followed by YouTube Red.

For many moviegoers, only one film released in 2017 successfully confronted racial inequality under the guise of mainstream entertainment, and that was “Get Out.” But another movie that fell into that same category has yet to hit theaters. Joseph Kahn’s “Bodied,” an outrageous hip hop satire that screened in the Midnight Madness section of the Toronto International Film Festival, has yet to land a theatrical deal; nevertheless, it topped IndieWire’s annual critics poll as the best undistributed movie of 2017.

The riotous comedy, in which geeky, overeducated white grad student Adam (Calum Worthy) permeates Toronto’s underground rap battle scene, is a blatant provocation: A big part of the movie revolves around Adam’s realization that racial epithets and other seemingly offensive aspects of rap performance are key to his own success in the scene, and that participants regard such button-pushing lyrics as less problematic than his socially-progressive background had led him to believe.

At a polarizing moment for national conversations, when online vitriol regularly supplants nuanced conversations, Kahn’s intentionally abrasive movie is an enlightening statement on the virtues of self-expression devoid of political correctness. Of course, that makes it a tough sell, but Kahn’s not worried. Though “Bodied” is only his third feature after “Torque” and “Detention,” he has made a living as a commercial music video director for over 20 years, working with artists ranging from Eminem (who has an executive producer credit on “Bodied”) to Taylor Swift, for whom he has directed six videos to date.

In between hammering out a yet-to-be-finalized deal to release “Bodied” in 2018, Kahn spoke by phone about how the idea for the movie emerged from his own encounters with today’s divisive climate and why he has no interest in making studio movies.

This movie is all about pushing beyond people’s comfort levels with what you can and can’t say. Was it hard to get financing for it?

Financially, I just take care of it myself. I’m on the hook for everything. It’s all my money and loans I take out. That’s the way I did “Detention” and “Power Rangers,” which I never intended to make money on anyway. It was just like buying a Lamborghini and crashing.

Did you ever try to get “Bodied” outside financing?

There’s no way to make “Bodied” at a studio with the language, the topics — and, quite frankly, the unorthodox stance where politically it’s not necessarily identifiable. It’s not typical indie movie stuff about racial politics, where people can pat themselves on the back and say: “Absolutely, I’m not racist.” It’s much more muddled and ambiguous on purpose. Why would any studio want something that actually says something like that, where there’s no unified theory of universal happiness? It’s short format and people can say whatever they want. The stakes are so low. The combination of short format and no money means the message can be more direct — you’re not taking up that much time — and for the most part, there are no financial repercussions, so you can say whatever you want. I find saying a political message in a music video much, much easier than a two-hour movie where you’ve got to keep people’s attention and hopefully they won’t turn the damn thing off by the time you get to the end.

There’s this turning point in “Bodied” where the main character realizes that he’s only good at rap battles when he throws racially-charged insults at his competitor. How much of this stems from your own observations of hip hop?

The movie deals with hip hop, but it’s simply a vessel to get to the larger thing. I was making a movie about free speech, and the mechanism of people saying really awful things to each other in competition was an interesting way of expressing that. On a certain level, it is a hip hop movie, but I never would’ve made just a hip hop movie. It was more fascinating to me to use it as a mechanism for exploring a larger theme.

So how did you start thinking about that theme?

I’ve been noticing a trend in society where we’ve become so bifurcated in politics. The right has become more right and the left has become more left; the middle can’t really say anything because you’re offending one side or the other. We don’t even know what a central idea of politics is anymore. People are literally try to censor each other more than talk. I felt this needed to be discussed — especially the way that social media is really getting into this trolling phase, and the mob rule perspective of politics. If you say one thing that offends anybody, suddenly it’s a pile-on. It just seems like the conversation is getting more stifled.

I was trying to come up with an idea for a battle rap movie for a long time. I did a video for Taylor Swift called “Wildest Dreams” where we got into a lot of trouble for depicting Africa in the ’50s. It was based on movies like “The African Queen” and other classic Hollywood that took place outside of the U.S. I found that there’s a controversy that happens if you deal with anything that’s before 1959 because it’s racially-charged. For instance, if you watch Peter Jackson’s “King Kong,” it takes place in the ’30s and all of a sudden you notice there are no black people in the scenes taking place in New York. It seems really weird and out of place — but at the same time, you can debate it: Is this contextual? Is this a world before the enlightenment of Civil Rights? These are legitimate questions. This fell into my lap with “Wildest Dreams,” where some felt I didn’t put enough black people in it. It was an interesting conversation to have because when you say “black,” do you mean “African” or “African American”? There’s a contextual basis to all of this stuff.

But ultimately the conversation sparked this idea in my head that the debate was coming less from an intellectual place than an accusatory one. It wasn’t a question of whether or not the discussion focused on the contextual nature of cinema, how it can be placed in different societies in time. It was more like, are you a racist for doing this video? It was framed in a very accusatory manner, which is all politics now. At that point, I was like, OK, the one place where I know people can actually discuss controversial topics is rap battles. It seems like that’s the only place where people can have debates. Granted, they’re insulting each other.

But hip hop is often seen as perpetuating stereotypes — homophobia, for example.

Is there a place in hip hop that excuses you from homophobic content? That’s one way to look at it. Is the fact that one group of people that’s oppressed allow it to make fun another group that’s oppressed? Is there space for that? It becomes a battle between who’s more oppressed, African Americans or LGBT? It becomes very convoluted when you’re strictly talking about what you cannot say. It goes beyond the fact that hip hop is essentially an art form for oppression. It has a rule that you can and should say anything. That goes against the conflict of what hip hop is supposed to achieve. Those are two very specific things: The aspect of hip hop as a form where you can discuss anything versus hip hop being theoretically a vehicle to fight oppression. Those two things may not line up at the end of the day, because who makes the judgement call on what you can say to fight oppression when you become the oppressor? These are complicated questions that don’t have binary yes or no answers.

Eminem is an executive producer on the movie. What do you make of his legacy as it relates to your movie’s protagonist, a white rapper who feels out of place?

I think it’s a little unfair to Eminem to compare him, because the lead character was written as a response to Eminem rather than a reflection of him. The lead character lives in a world where “8 Mile” exists, and Eminem exists. It’s not fair to Eminem to say, “That’s another white guy like Eminem.” Not all white guys are the same. For instance, Eminem actually comes from the street, from 8 Mile, from a lower class family. He has lived his entire life in the world of African American culture and embraced it. Adam, the guy in the movie, comes from outside the system: His father is a world-class poet and Adam’s had an Ivy League education. So they’re two different people with different perspectives. Eminem didn’t go to college; he learned rap like anyone else, on the street, from the vernacular of the people around him. Adam learned how to rap through poetry and studying the classics. When he starts rapping in front of people, he’s more of a weapon. What Adam doesn’t have is understanding; he has to find that. From the start, Eminem had a feel for it.

You were writing the movie during the presidential election. There were so many moments then — and there still are — where everyone was like, “Trump can’t say that!” And then he did. How does that relate to the issues of freedom of expression you’re talking about?

Here’s the problem with overt political correctness. I am a liberal, support overt liberal causes, and any conservative would look at me and say, “What a douchebag.” But I have enough moderation with my liberal views, especially when it comes to free speech. For instance, I believe that Ben Shapiro should be allowed to speak at college campuses even if you completely disagree with him, because I feel like you can debate him. A good, honest intellectual debate should be able to point the flaws in his thinking. If we’re at a point in our society where you cannot debate someone like Ben Shapiro and tear down his argument, then you’ve kind of lost, anyway. You aren’t promoting the agenda if you puncture it with good logical arguments. Logic and humanity will win at the end of the day if put into a fair debate. But when you shut everything down and don’t want to hear anything no matter how wrong it is — if you create a closed-off society with no negative point of view — then the negative point of view becomes candy for a certain demographic of the public. And that’s what I think happened with Trump.

I think Trump is a charlatan, I think he’s a liar, and I don’t think anything he says is true. But what you hear from the other side is that “He’s saying things people don’t want to hear.” This is actually true: He is saying things people don’t want to hear. The problem is when you close off society so much, these things take on a weird legitimacy to them. Suddenly the shock value becomes the point, even though what he’s saying is complete bullshit. That’s why free speech is so necessary to society — so the shock can be taken away and the message can be heard more than the pure act of spouting out nonsense.