Dwayne Johnson and Kevin Hart lead a meta-sequel to a 1996 movie that exactly zero human beings have watched since the days of VHS. 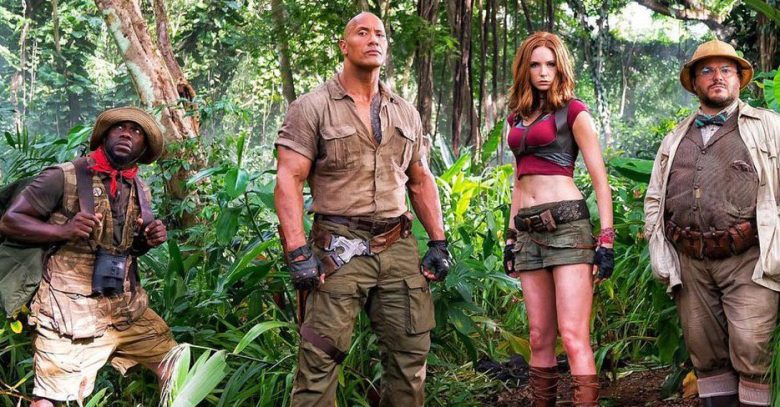 A semi-related sequel to a 1996 kids movie that exactly zero human beings have watched since the death of VHS, the mildly amusing “Jumanji: Welcome to the Jungle” is further proof that even the stalest whiff of brand recognition has become preferable to originality. Only part of the blame for that belongs to the studios, but after cannibalizing themselves for much of the last 20 years, Hollywood has clearly eaten their way down to the crumbs.

That’s not to suggest the original “Jumanji” was such an unspeakably terrible thing — Joe Johnston has always known how to serve a fine bowl of popcorn entertainment — but rather to say that no one should ever have to write the words: “The original ‘Jumanji.’” And while it’s nice that this new adventure has virtually nothing to do with the first one, “The LEGO Batman Movie” screenwriter Chris McKenna leveraging the franchise’s most basic premise in order to pursue a clever post-modern concept, that’s also part of the problem: Despite the fact that nobody cares about “Jumanji,” our collective familiarity with that nonsense word is the only reason why Sony Pictures was willing to invest in such a high-concept holiday comedy, and the only reason why much of its eventual audience might be willing to give it a chance. Everybody wants something new, but nobody is willing to risk spending their money on it.

Does any of that actually detract from the experience of watching “2Manji”? Not really. At least, not always. When Jack Black, who’s pretending to be possessed by the soul of a self-obsessed teenage girl, suddenly gets swallowed whole by a killer hippo, there’s a good chance you won’t be too busy thinking about the socioeconomics of nostalgia to enjoy it. On the other hand, when the entire cast looks at the sky and screams “Juuummaaannjiiiii!!” in unison during a climactic moment, paying customers might just feel like they’re part of the problem. The more “Welcome to the Jungle” moralizes about how people — young people, in particular — only have one life to live, the harder it gets to overlook the fact that this film was essentially brought back from the dead.

Once upon a time, “Jumanji” was pretty much just a super interactive version of “Trouble,” but even magically enchanted board games from hell have to keep up with what the kids like. Now, “Jumanji” is a video game, and everyone who picks up a controller gets sucked inside its jungle setting.

The players are a Breakfast Club’s worth of misfits whose fates intertwine during the deadliest detention of their lives. There’s Spencer (Alex Wolff), a nerdy gamer whose bedroom is such a marvel of product placement that it could easily double as Sony’s E3 booth (FYI: “The Last Guardian” is available now for the Playstation 4). There’s Martha (Morgan Turner), a shy but severe bookworm who doesn’t realize that we’re gonna need a few more years before it’s okay for movies to use her first name again. Next is “Fridge” (Ser’Darius Blain), the football star who’s slacking on his schoolwork. And finally we have Bethany (Madison Iseman), the pretty girl who cares only about boys and Instagram pics and whether boys like her Instagram pics.

Don’t get too attached to any of these archetypes, because it isn’t long before our unlikely group of heroes are spirited into the world of Jumanji, where their souls inhabit the bodies of the avatars they chose from the “character selection” screen. Spencer outwardly becomes the smoldering Dr. Xander Bravestone (Dwayne Johnson), fulfilling every scrawny teen boy’s fantasy of having biceps the size of small buildings. Johnson is an enduringly winning presence, but he’s now played against type almost as many times as he’s played into it; the only interesting future that’s left for him might be in playing more comically jacked normal people. Or who knows, maybe he’ll just become President. Make America Buff Again or whatever. Martha is zapped into the body of Ruby Roundhouse (Karen Gillan), a Lara Croft type whose revealing outfit seems ill-suited for jungle exploration. In a classic example of a movie having its cake and eating it too, Gillan’s toned midriff gets so much screen-time it deserves its own SAG card, but the film’s meta-narrative ostensibly excuses its leering gaze (in fairness, the camera spends plenty of time ogling The Rock). Fridge becomes the diminutive “Mouse” Finbar (Kevin Hart, trying hard to recreate whatever chemistry he shared with Johnson in last summer’s “Central Intelligence”), and Bethany has the misfortune of turning into Professor Shelly Oberon (Jack Black, whose self-deprecating lead performance as a pretty girl trapped in an “overweight, middle-aged man’s” body generates the film’s only real laughs). Nick Jonas also shows up at some point, but don’t worry about that.

The “Freaky Friday” of it all goes a long way towards distracting from a straightforward story full of stale action beats, and director Jake Kasdan (“Walk Hard”) is clearly a lot more comfortable with improv comedy than he is with large-scale CG. “Welcome to the Jungle” is at its most fun in the moments when it leans into the video game nature of its reality, assigning each of its characters three “lives” and amusingly adhering to the rules and limitations of an old-fashioned side-scroller. To borrow a phrase from Buzzfeed, there are gags here that only ’90s kids might get. On the other hand, people of all ages can enjoy whatever the hell Bobby Cannavale is doing in his glorified cameo as the villainous John Hardin, whose ability to vomit scorpions is a lot scarier than his name.

Will Xander teach Spencer how to be brave? Will Bethany learn how to care about other people? Will Martha learn how to talk to boys? Will Fridge learn how to do his homework or something? Will Nick Jonas learn why he’s even in this movie? Will The Rock and Kevin Hart continue riffing on old Robin Williams movies due to the overwhelming demand to see them swap in for Matt Damon and Ben Affleck (respectively) in a reboot of “Good Will Hunting”? All, or at least most of these questions will ultimately be answered in very pat ways, but the characters’ personal journeys are engaging enough to see them through the dull roar of their adventure.

The studios may be eating themselves, but hopefully they can survive on movies like this for long enough to figure out who they want to be when they grow up.

“Jumanji: Welcome to the Jungle” opens in theaters on December 20.

This Article is related to: Film and tagged Dwayne "The Rock" Johnson, jumanji: welcome to the jungle, Kevin Hart, Reviews