History's new drama is a bloody, would-be medieval epic that rarely feels true to its time. 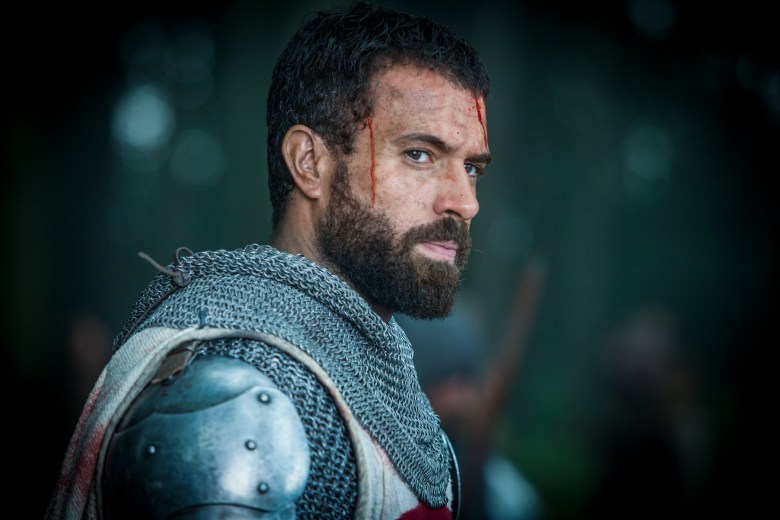 This is either the best or worst time to be releasing a new series set in the aftermath of The Crusades, a centuries-long campaign to claim the Holy Land as Christian territory. Regardless of its timing, the new History series “Knightfall” falls short of the careful examination that this monumental period of world history deserves. Ambitious in its scale, but hamstrung by its conventions, “Knightfall” often confuses violence and brutality for visceral authenticity. Using the Templar Knights as an entry point into a volatile period in France and the world at large, the result is a series that often focuses its energies on the least compelling areas of its tapestry.

As a sword and shield epic, “Knightfall” brings a kind of visual comfort that will likely endear it to pre-existing fans of “Game of Thrones,” “Lord of the Rings,” or even “Braveheart” (whose antagonist King Edward “Longshanks” I is name-dropped here). But even using a familiar template for the brutal hand-to-hand combat (if you love seeing dudes getting stabbed out through their mouths, then this is the show for you!), these battles only matter when you care about who’s fighting. The opening sequence in the pilot tries to convey the grandeur of the fighting that largely brought the Holy Land part of the Crusades to a close, but it’s not really until the individual stories of these Templar Knights get revealed that the show starts to become something deeper than an attempt at merely recreating history for visual splendor.

In the court of the French King Philip IV and Queen Joan, Templar knight Landry (Tom Cullen) becomes far more than just a dutiful servant of the crown and occasional sparring partner for the king. Landry is effectively the show’s lead (he gets the pivotal character-strengthening flashbacks to prove it), and the eventual search for the Holy Grail becomes the eventual backbone for the series.

But it’s royal envoy William De Nogaret that emerges as the show’s beating heart, for better or worse. As a shadowy string-puller in matters of French governance and literal international affairs, his character is bathed in much of the usual, hushed hallway conversations where characters delight in the how evil and dastardly their schemes are. But Julian Ovenden brings a certain distinct charisma to the character’s sly nature, even as his actions grow increasingly despicable and unforgivable.

The Grail itself is a curious and difficult MacGuffin for the show to build around. The fact that it represents so many different things to different characters on the show is a testament to its power as a cultural symbol, even back in the 13th century. But as a way of focusing the series, it ends up pulling the show in too many directions. When it’s treated as a totemic artifact of faith, the show briefly considers how much value there is in mass slaughter and warfare over control of physical objects. When characters talk about the Grail’s fantastical healing powers, “Knightfall” takes on more fantasy airs. When it’s viewed more as a target for rival mercenaries, it becomes the engine for a medieval spy story. None of these potential directions are necessarily wrongheaded (unless you count the questionable ethical explaining away of why this bloody war is happening in the first place). But when jumbled together, there’s a certain messiness to this history that extends beyond the questionable motivation of its central characters.

Though, it is curious and slightly unexpected, to see a show set in this era treat its royal characters with relative simplicity. Philip (Ed Stoppard) is made to look like a hapless figurehead rather than the megalomaniacal force that most TV kings are painted as (particularly one with theoretical aims of uniting all of Europe under one royal house). Queen Joan (Olivia Ross) faces two very distinct and specific dilemmas, but being a woman in her position in a feudal time, “Knightfall” can’t (or opts not to) give her much to do outside the castle walls.

For fans of historical soapiness, there’s plenty of steamy encounters and forbidden love stories to satisfy any basic cable cravings. But while there’s the obligatory level of shady interfamily drama, there’s not a whole lot of specificity here on the palace intrigue side. There’s the pervasive sense that “Knightfall” wouldn’t change very much if it was swapped into an entirely different century or set within the hierarchy of a more modern business instead of a burgeoning empire.

Read More: Here’s Where You Can Watch the Best TV of 2017

Jim Carter as Pope Boniface VIII is a character force that doesn’t always fit with the rest of the show at times, but is a distinct throwback to the historical and religious epics of the past. With the Pope as the benevolent uncle figure type early on, just trying to make sure that all the royals and knights maintain honor and order in equal measure, it’s another example of the show’s curious decision to demystify history when it comes to the people involved.

In regards to the Templars’ treatment of the “Saracens” or their response to persecution of members of the Jewish community living in France, the show does have a sheen of saviorhood that feels insincere at times, revisionist at others, and overall a centering perspective that hamstrings the show’s ability to fully invest in anyone not wearing chainmail.

So, at least for the better half of its opening season, “Knightfall” is a wispy acknowledgment of a period in time that calls for a more thorough, less surface-level evaluation. There may be a kernel of truth in turning figures from history into petty people with outsized grievances whose grudges and short-sightedness meant bloodshed on a cataclysmic scale. But as the foundation for ten episodes of a TV series, it makes an era that literally changed the world into something that feels so small.

This Article is related to: Television and tagged History, Knightfall, TV Reviews