Kyle MacLachlan spoke to IndieWire after his Golden Globe nomination for "Twin Peaks" and weighed in on the film vs. TV debate. 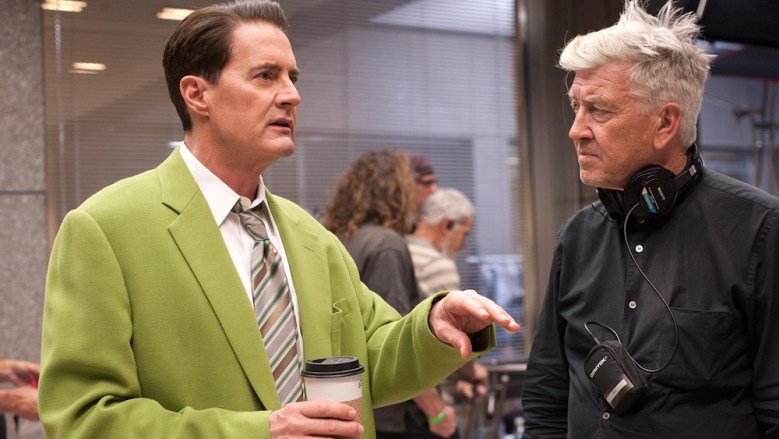 When Kyle MacLachlan won a Golden Globe award in 1991, he was nominated for the television series “Twin Peaks” in the role of Agent Dale Cooper. In 2018, when he attends the 75th Annual Golden Globes, he’ll again be nominated in the TV category for his portrayal of Dale Cooper.

But should he be nominated for film, instead?

Though no one debated what “Twin Peaks” was when it debuted on ABC in 1990, many consider its sequel, “The Return,” to be more of a film than a TV show. And MacLachlan is one of them.

“I lean toward the film example only because it was written as one story,” MacLachlan said in an interview with IndieWire, shortly after the nominations were announced. “We were all encouraged not to refer to it as episodes, but as hours. There was never an act break or anything like that in any of the writing, so it was constructed to be an 18-hour film experience. In that way, I do think of it as more of a film.”

MacLachlan also pointed to his experience seeing “Twin Peaks: The Return” in a theater as a reason to treat the Showtime series like a movie. “In watching it on a large screen, which we did at the premiere and also in Cannes, it was like watching a film,” he said. “It wasn’t like this was shot for a small screen and then blown up and the frame was inadequate. It was cinematic. So I think in that way, you can define it as a film, for sure.”

The debate over “Twin Peaks” as a film or a TV show sparked up again when film journals Sight & Sound and Cahiers du Cinema listed “The Return” on their Top 10 film lists. This led to film and TV critics sounding off via Twitter and published articles, defending their decision to include or disqualify “Twin Peaks” from various rankings.

THREAD: 1. Believe me, I’m aware that David Lynch said he’s making an 18-hour movie. But I got news for folks who don’t write about TV regularly: every single person of any ambition who’s ever worked in series TV says they’re making “a long movie” or “a bunch of little movies.”

MacLachlan may think of “The Return” as a film, but he’s cautious about people watching it all at once.

“We’re in the age of binge television, and I know that people are approaching ‘Twin Peaks’ that way, but I find that incredibly difficult because it’s so dense,” MacLachlan said. “There’s so much to think about. I think as an audience, you’re moved in so many different ways, unexpected ways, that you need time to process. You can jump from one to the next to the next, but [laughs] you’re putting yourself through a real challenge.”

MacLachlan is more concerned with preserving the experience than how that experience is achieved.

“I think you can [watch] it in any sort of segments that you want,” he said. “I think back to plays like ‘Nicholas Nickleby,’ where you were meant to come watch a few hours in the morning and then come back and watch more hours in the evening. It was like one giant experience you were meant to go through. I think you can do the same thing with ‘Twin Peaks.’ You could sit and watch the first four hours. You could watch the first three hours, the first three-and-a-half hours, the first five hours — it doesn’t really matter because at no point in time is there a break.” It’s worth noting that “The Return” is far different from many TV revivals. Unlike, say, “Will & Grace” — which received two Golden Globe nominations on Monday — “Twin Peaks” isn’t a carbon copy of its former self. It’s developed into a new beast.

“The boldness — although I don’t think it was a choice — of David to not want to revisit the world of ‘Twin Peaks’ in a nostalgic way, to take these characters into a whole other place, he was more interested in that story than trying to recreate or revisit something that had its time 25 years ago. That takes a lot of courage,” MacLachlan said.

In addition to the series itself, plenty has changed for MacLachlan since his first nomination (and win). The actor was asked to take on more than one role for “The Return,” playing Agent Dale Cooper, the short-lived Dougie Jones, Cooper’s evil doppelganger Mr. C, and another version of Dale Cooper who’s a bit… slower than normal.

“The Dougie character was challenging just in the fact that you have… not a lot of dialogue,” MacLachlan said, laughing. “It relies on stillness and very, very simple comedy and heart that would hopefully resonate with the audience. And I think it did. I think he wound his ways into people’s hearts that was intended, but not expected. You just don’t know if that’s going to work. So that was pretty special.”

“Recognizing the opportunity that I had [to play] these three or four characters David [Lynch] and Mark [Frost] created was just sort of unbelievable to me,” MacLachlan said. “That David felt the confidence in me that I could bring these guys to life […] that filled me with this awe. I’m really pleased it was able to get the recognition that it did.”

“Twin Peaks: The Return” is streaming now on Showtime, and the Blu-ray and DVD sets are available for purchase.