The live reality show, which has seen viewership grow 145 percent since launch, produces every unpredictable 3-hour episode without even a rundown. 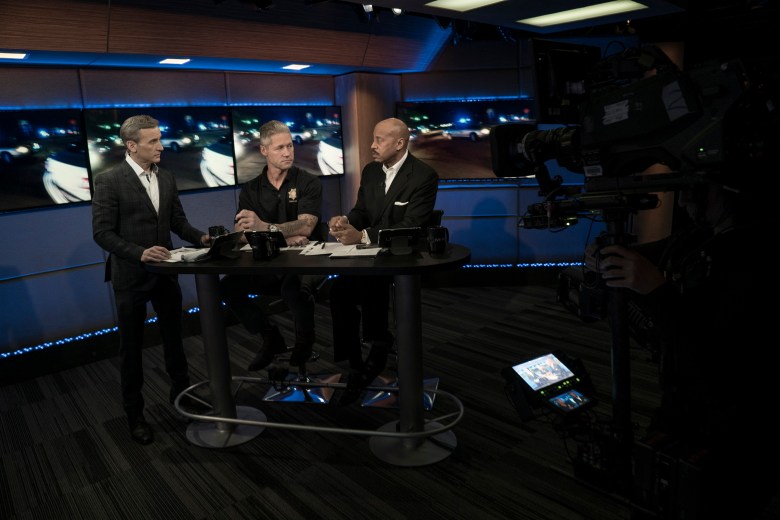 There’s nothing quite like “Live PD,” the hit A&E series that follows cops and sheriffs — live, in real time, as they patrol various cities and counties across the country. The series began as an eight-episode experiment, for two hours a week, back in October 2016. But as it turned into a sensation, A&E kept expanding the show’s footprint.

Now, “Live PD” airs twice a week, on Friday and Saturday nights, for three hours both evenings (from 9 p.m. to midnight). And other than a brief five-week hiatus in September, it’s been on the air for most of the year.

“It is by far the most frustrating, challenging, and gratifying program that I have ever been involved with,” said executive producer Dan Cesareo, whose Big Fish Entertainment is behind the series. “No two nights are the same. You could have a great show one night, where we made the right decisions and did a great job with the storytelling, and then the next night you could hit the tunnel where it feels like you’ve never made the show before.”

It’s that kind of unpredictability that has turned “Live PD” into a sensation for A&E. Viewership is up 145 percent from its launch, and it’s now averaging 2.1 million viewers — helping make A&E the most-watched non-sports network among adults 18-49 and adults 25-54 in those timeslots.

Dan Abrams hosts “Live PD” with analysis by Tom Morris Jr., and other in-studio guests who provide commentary for what’s going on. “Live PD” will air its final episodes this weekend before a two-week holiday break, and feature fan favorite Deputy Rebecca Loeb of Lake County, Ill., known for her pink handcuffs.

IndieWire asked Cesareo to share a few secrets from “Live PD” as it heads into its final weekend telecast of 2017. “Live PD” may boast the most chaotic control room in all of television.

Unlike every other show — including most live events — there is no production rundown for “Live PD.” Every episode is produced by the seat of their pants.

“It’s a crazy, difficult show to produce,” Cesareo said. “We’re the only live show on television where we show up at 9 p.m. we have three hours of television to make and we have no clue where we’re going or how it’s going to unfold.”

Some observers have compared “Live PD” to DirecTV’s “Red Zone,” which similarly shifts to different cameras, depending on the action. But “the thing about the ‘Red Zone’ is you know someone is trying to put the ball in an end zone. I think ‘Live PD’ is closest to a significant breaking news event where you just don’t know how the story’s going to unfold.”

Every episode takes place in six cities, with two police units in each city.

During the show, there are 12 units being filmed live, and with three cameras per unit, that’s at least 36 cameras chronicling the action. Producers in the studio are in constant contact with producers in the field.

“You’re building a puzzle based on timing that you have to figure out,” Cesareo said. “Sometimes a department will say, ‘We’ll be there in two minutes,’ and it takes them 12. Other times, they say they’ll be there in five to seven minutes and all of a sudden they’re there in 30 seconds. It’s learning that shorthand, how these departments operate.”

“We really wanted a cross section of law enforcement,” he said. “We didn’t just want cities or heavy metropolitan areas.”

Viewers at home have pointed out activity — such as suspects throwing drugs out of car windows — that even police have missed.

“Different departments handle it differently,” Cesareo said. “There are departments that monitor Twitter during the show, and when the viewers point something out, they might send an officer back to investigate it. For us it’s happening so quickly, most of the time the viewers are seeing things we learned about the same way the police does.”

The show doesn’t select the officers who appear on camera.

“We work with the department and follow the officers who have shifts when we’re live,” Cesareo said. “The cameras are there so much and filming along a longer period of time that people are who they are. Anyone who thinks they’re going to behave differently when the cameras are present, that goes away very quickly.” The control room team boasts live news and sports experience, while camera operators in the field were recruited from other law enforcement TV shows.

Director John Gonzalez was originally approached for a recommendation on another candidate, but he was so intrigued by “Live PD” that he signed on himself. Gonzales’ background includes Major League Baseball, while his team combined boasts more than 10,000 hours of live news coverage. But for the crew on the front lines, Cesareo said it was key to find producers and camera operators who were well versed in covering law enforcement.

“Safety is paramount, it’s something we reinforce on a weekly basis,” he said. “They’ve all shot on all sorts of shows and been in high-risk environments.”

Lawyers are stationed in the control room to make sure the show is protected.

Because “Live PD” is considered a live news program, the show is legally able to show faces on camera. But both Big Fish and A&E have attorneys in hand in the control room to make sure “Live P.D.” isn’t exposed to any legal problems. “We spent a lot of time and a lot of careful thought in the nine to 12 months we were developing the show before it launched, really crafting our legal protocol,” Cesareo said.

Like most law enforcement series, “Live PD” is starting to receive requests for footage, which is owned by A&E. It’s handled on a case-by-case basis.

With so much footage being shot weekly, most of it is deleted afterward.

Anything that appears on air is saved, of course, but “Live PD” is also shooting throughout the week, and most of what doesn’t make it on screen is recycled. “It’s cost prohibitive to keep it,” Cesareo said. “We have 36 to 40 camera, and if they’re shooting three hours a night on the weekend and during the week we’re generating 300 to 400-plus hours of content a week.”

A squealing pig may have been the show’s funniest moment so far.

“Live PD” was shooting in Florida last month when cops began to pursue a suspect who bailed out of a car and started running. But in the course of tracking that guy down, police came across a pet pot-bellied pig that was on the loose.

“The officer decides they’re going to corner this pig and figure out who had lost it,” Cesareo said. “They picked this pig up and this pig squeals and goes crazy for a good minute or minute and a half. The owner comes running. It went from this very high tense moment to this moment of levity and I think that’s what’s unique about this show. It captures this job like nothing else that has come before.

“The moments I love in ‘Live PD’ are the moments that would never be in an edited show. When you make an edited show it’s about a singular story, how you’re putting it together. What we’re doing is pointing the camera at these stories and giving it all.”

This Article is related to: Television and tagged A&E, Live PD, Reality