Partners in writing and in life, Gordon and Nanjiani sometimes write in matching red pajamas. "Answering the door with those is embarrassing," said Gordon. 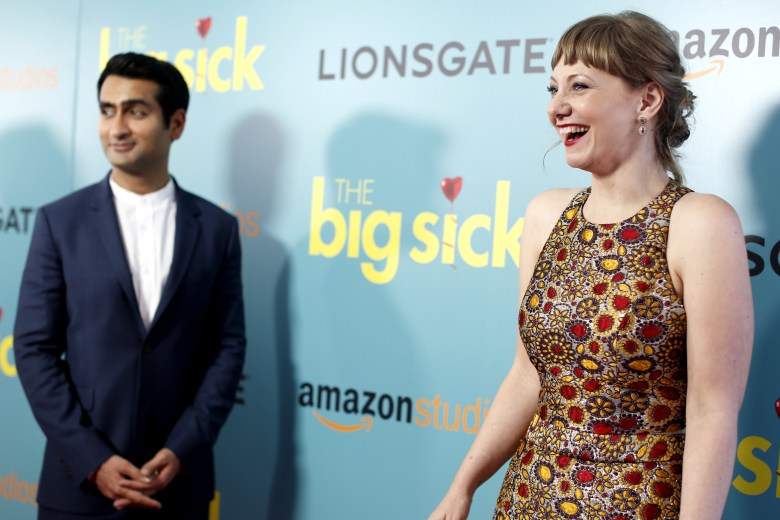 In terms of the scope of ideas, “The Big Sick” is a big movie: Impeccably crafted, bitingly funny, and touting a grounded kind of love rarely championed in Hollywood. Writers Kumail Nanjiani and Emily V. Gordon dramatized their real-life romance to deliver one of the timeliest and most delightful romantic comedies to come out in years. “The Big Sick” tells the story of a mysterious illness that left Gordon (played by Zoe Kazan) in a coma, an experience that forever bonded Nanjiani to her parents, who are played by Ray Romano and Holly Hunter.

“Three years ago I started prepping my parents,” Gordon told IndieWire in an interview for our Spotlight Awards series. She was referring to the delicate process of pouring one’s life into a narrative screenplay, especially when her mother asked for her character to “just be nice.” “That can’t happen,” Gordon reportedly told her mother. “That’s not what makes movies good.”

The two naturally share chemistry that extends into their working relationship. Praising Gordon’s gumption, Nanjiani said she taught him not to be so precious about writing rituals. “Emily would just sort of write wherever, and I had all these rituals about it,” he said. “You build it up too much in your head sometimes,” Gordon interjected. “If you create — ‘it has to be like this, and I have to be feeling this way.’ You just have to write, that’s all you have to do.”

They did admit to one very special ritual: Wearing matching red pajamas. Gordon: “Answering the door with those is embarrassing.”

Like a good stand-up set, “The Big Sick” feels casual and naturalistic, but is in fact structured and written to a tee. “The structure of the movie was always that I learned to have a relationship with my parents, by having a relationship with Emily’s parents,” said Nanjiani. “When you grow up, you have to learn to have a grown up relationship with your parents. In the movie, that’s the challenge that my character is dealing with. He doesn’t see his parents as real people, he sees them as parents.”

This Article is related to: Awards and tagged Emily V. Gordon, Kumail Nanjiani, The Big Sick