It's almost the end of the year, which means it's time to start cutting shows from your TV budget, starting with broadcast's latest. 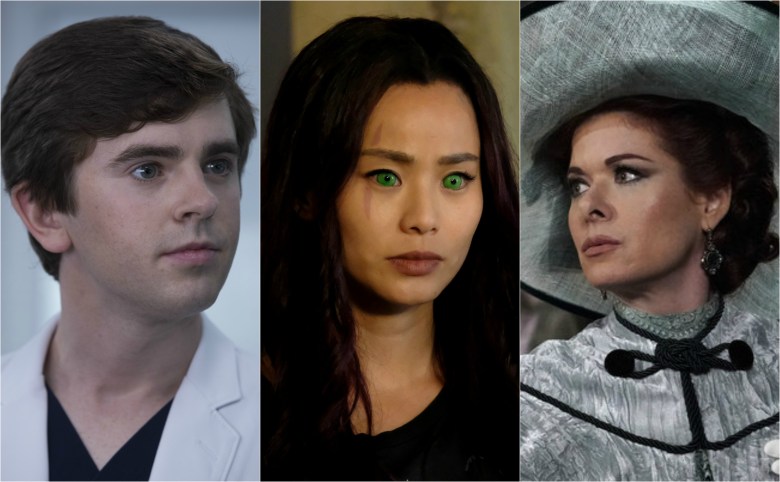 As fall transitions into winter, TV seasons change with the weather. It feels like just yesterday, the internet was abuzz with anticipation for a slew of new fall shows. “The Orville,” “Young Sheldon,” “The Good Doctor,” and more are all shows that feel like they just started, and in a way, they did; September wasn’t that long ago. But after seeing anywhere from seven to 12 total episodes of each series, opinions change and decisions have to be made.

Winter is coming: More new shows are on the way, and keeping up with everything isn’t an option. So it’s time to make cuts, starting with the new broadcast series that have aired enough episodes to be assessed properly. We know what they are now. Here’s what we think.

Original Review (One Episode): The pilot eliminates the guffawing studio audience for a surprisingly melancholic new tone, in the story of an outsider trying to survive adolescence.

Where It Stands Now (Eight Episodes): “Young Sheldon” remains a very different show from its predecessor: There’s no laugh track, no multi-camera setups, and fewer jokes. That’s a good thing, mostly, but it also hasn’t quite paid off on the promise of its pilot. The melancholic survival story pushed in the premiere has developed into a thoughtful study of a young, unique savant. There’s less urgency and less pathos, but it feels like it’s more sustainable this way; as if it’s building up to a few big episodes that’ll turn things in its favor. What’s here is solid and still surprising; what’s coming could be great. Original Review (Three Episodes): The new “Will and Grace” has something to say, and it’s a treat to hear them say it.

Where It Stands Now (Seven Episodes): “Will & Grace” is still its old charming self, though a modicum of the sparkle has worn off. The logic-straining premise of the premiere went down fairly easy in all the excitement of seeing Will, Grace, Jack, and Karen back together again — plus, the purpose of taking a trip to D.C. was commendable enough to let the rest slide — but the few follow-up episodes are sporadically successful. “Grandpa Jack” is surprisingly sweet, while “How to Succeed in Business Without Really Crying” is already forgotten. “Rosario’s Quinceanera” does right by Shelley Morrison’s beloved character, but “A Gay Olde Christmas” almost strains too hard to dress up tired material. (And speaking of straining, only some of the many, many cameos from returning actors — like Nick Offerman, above — feel worth the effort.) This NBC update is still better than most revivals, but there are a few too many threads that, if tugged in the wrong direction, could unravel the fun. Where It Stands Now (Nine Episodes): “The Mayor” is still a vibrant, fun, and topical comedy with a charming lead performance from Brandon Michael Hall. It’s also leaning a little too heavily into formula. Hall’s new mayor, Courtney Rose, gets cocky, makes a mistake, and learns how to become a stronger political figure while fixing it. Typically, creator Jeremy Bronson keeps things flying along so you don’t mind the repetition, but the comfortability that some broadcast audiences enjoy is also keeping the series from becoming an essential part of primetime.

Take It or Leave It Original Review (One Episode): Swapping out a grumpy old man with an addiction to pills for a baby-faced savant with magical autism, “The Good Doctor” is a schmaltzy, silly “House” clone.

Where It Stands Now (Nine Episodes): Over its first seven episodes, “The Good Doctor” has pushed past most of the pilot’s sillier elements. It’s not exactly a grounded drama, but it’s not trying to be, and viewers aren’t looking for that. What they’re looking for is a “Grey’s Anatomy”-“House” hybrid, and David Shore’s ratings blockbuster is delivering. Still, there have been few storylines that stand out beyond the typical medical drama; this one’s just done well enough to make you buy in, thanks especially to Freddie Highmore’s committed, layered turn. If that’s your bag, great. But it’s far from essential TV. Original Review (One Episode): “Ghosted” proves worthy of further investigation, but this buddy cop take on paranormal investigation needs to look beyond its stars.

Where It Stands Now (Eight Episodes): This one hasn’t developed as well as, on paper, it should have. Despite getting a ton of exposition out of the way in the pilot and establishing a fun premise, “Ghosted” hasn’t found its groove. Craig Robinson remains too stiff as an action hero former cop, and Adam Scott’s dorky professor character is being pushed too far into ineptitude; he’s supposed to be the smart but less cool sidekick, but he’s not given enough scenes to be charmingly awkward or compellingly intelligent. Some of the problems arise from Robinson and Scott trying to make up for lackluster writing — with exaggerated physical comedy — but when they put their trust in the show, it doesn’t fare any better. There’s too much air in the scenes. “Ghosted” needs a creative punch-up and a lot more fun. (Good news: It’s getting one!) Where It Stands Now (Nine Episodes): “SEAL Team” remains a respectable CBS drama with strong procedural storytelling… if that’s your kind of thing. Slightly more than a star vehicle for David Boreanaz but far from a stretch for the former “Bones” star, “SEAL TEAM” is a good fit for the CBS audience and unnecessary for anyone who bucks at being categorized as such. But hey, there’s still Dita. Original Review (One Episode): Bryan Singer can’t recapture his “X-Men” magic in “The Gifted,” a basic superhero story that unwraps nothing new in its first hour.

Where It Stands Now (10 Episodes): While there are undeniable parallels to discrimination and immigration, “The Gifted” is still a rather predictable, thrill-less hour of television that hasn’t found a consistent source of drama, fun, or basic entertainment. The cliches stack up faster than the references to “X-Men,” and both make “The Gifted” feel like a second-rate interpretation of a franchise that’s been going downhill since the first film. If Garrett Dillahunt can’t save a show, then you know it’s not worth saving. Original Review (One Episode): The only way “The Brave” earns its title is if its shocking cliffhanger pays off.

Where It Stands Now (Nine Episodes): The shocking cliffhanger did not pay off. I know, I know. What a surprise. But that was more than enough to call it quits on this very basic war thriller. [Note: As tempted as we were by the photo above to get a sneak preview of “12 Strong: The Declassified True Story of the Horse Soldiers” — which is a real movie that’s really coming out with that very real subtitle — we only made it through the first four episodes of “The Brave” before pulling the ripcord. Further research indicates the show remains very much what it was in those first four hours, but we apologize if we are wrong about that.] Where It Stands Now (12 Episodes): “The Orville’s” flaws have been well-documented: As a “Star Trek” clone it borrows too much of the specific physical elements — the uniforms, the ship, the title cards — and fails to capture the series’ thought-provoking spirit. It’s not the right update, blend, or reimagining on many different levels, but it’s also just a very poorly written television show. For those who argue “The Orville” is not a “Star Trek” rip-off, first-off, get real; but it’s also hard to look past the fatal flaws that would damn any typical original program. There’s a ton of dead air, awkward tonal shifts, half-developed thoughts, redundant dialogue, repetitious plot points, and jarring bits of take-it-or-leave-it comedy. Yes, there’s admittedly a charm to watching a show about people who try to do good, all the time, but that’s not a good enough reason to stick with a series that tries and fails to be good itself. It’s bad, people. It’s just bad.

This Article is related to: Television and tagged The Good Doctor, TV Reviews, Will and Grace