For anyone still (rightfully) intrigued by Sam Elliott’s tragic rancher, this marks the first essential recap of any Netflix series — we watched so you don’t have to. 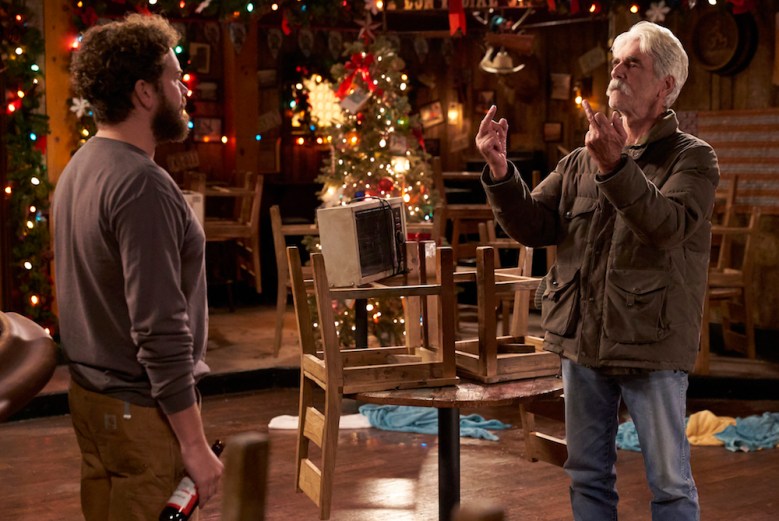 In case there’s any confusion over the matter, Danny Masterson is in every episode of “The Ranch” Season 4. Despite a highly-publicized controversy that ended in the series regular being fired from Netflix’s Emmy-winning sitcom, that decision took place after filming had been completed on “Part 4.” The new episodes that were released Friday, December 15 are just like the first three seasons: Masterson, as the older brother, Jameson “Rooster” Bennett, is heavily integrated into every half-hour installment.

So fans have a choice to make: Watch “The Ranch” and try to overcome the building rage of watching an alleged rapist goof around or skip 10 episodes and pick the show back up once Masterson is gone for real.

For many, this isn’t much of a choice. With so many truly excellent TV shows out there, “The Ranch” isn’t exactly at the top of many Netflix subscribers’ must-see list. Most reviews have been harsh (including IndieWire’s), so one more reason not to watch is a redundancy.

But while “The Ranch” isn’t cracking any Top 10 lists in 2017 (literally zero), it has slowly but surely built up a reputation for being very, very good at one thing: Sam Elliott’s story. Beau Bennett is the family patriarch and a classic father archetype at that: He’s often scowling, quick to mock his effeminate sons, and sports a set of masculine ideals that would make Ron Swanson proud — well, except for the conservative stuff.

More importantly, he’s a tragic figure in a classic comedy. Beau’s story is filled with pain, as he struggles in a slowly dying profession and mourns a marriage that’s reached its end. He stands out thanks to the honesty with which Elliott portrays him and the surprising amount of pathos established in his story. Critics have taken note, and fans are certainly engaging with Beau’s life, if not the series overall. All this is to say there are lots of reasons why people would have good reason to watch, whether they would describe themselves as fans or merely interested parties with nothing better to binge this weekend. For those with the desire to resist; with the moral fortitude to say, “No, I will not support an accused rapist, even though I want to watch his show”; with the interest to have read this far in the story, here’s the truth:

That being said, it needn’t be said that things still happen in “Part 4.” Important plot points exist that viewers will need to be aware of if they decide to re-engage for Season 5 (which Netflix has not officially given the go-ahead to just yet). So we wrote them down for you. Those who caved and watched the new episodes can reflect on what they just saw, but the following recap is primarily for those curious few who want to know what happens without spending five hours with Danny Masterson.

[Editor’s Note: The following review contains spoilers for “The Ranch” Season 4 (“Part 4”), up to and including the ending.] No, There Is No Acknowledgement of Danny Masterson’s Termination

It may have been irrational to expect a cue card to pop up at the start of the season saying, “As a result of ongoing discussions that may or may not have to do with multiple rape and sexual assault allegations, Danny Masterson has been written off ‘The Ranch.’ Out of respect for the hard work done by everyone else involved with the series, we present these episodes as they were shot and crafted, including Masterson’s performance, which proved too integral to the story to be removed.”

Still, considering how soon the season was released after his termination, some folks may have expected some form of acknowledgment as to why Masterson’s name and face are all over the new episodes. Let this article be your missing cue card.

There’s No Easy Way Out for His Character, Either

“The Ranch” “Part 4” ends on a cliffhanger involving Masterson’s Rooster and his younger brother, Colt (Ashton Kutcher). After spending most of the season going back and forth with their dad about whether or not to buy the neighboring ranch, the two brothers go behind Beau’s back, sign the papers, and become the new owners of “The Bennett Brothers Ranch.”

They were only able to do it because Beau gave Rooster power of attorney. At the end of Episode 8, the eldest Bennett has a heart attack and spends the finale out of town getting an angioplasty. His absence allows the brothers to buy the ranch without his permission, but the only reason they go through with it is because they were about to land a huge payday. (A natural gas company wanted to run a pipeline through their land, but more on that later.) In the waning seconds of the season, the money falls through and the boys are left with a ranch they can’t afford and a father who’s going to be extra pissed off when he gets home.

Page 1 of 2
Continue Reading: ‘The Ranch’ Review: One Last Season with Danny Masterson is Too Many, So Here’s What Happens and What’s Next

This Article is related to: Television and tagged Danny Masterson, The Ranch, TV Reviews