Heroes and villains alike make dumb decisions in Season 8, Episode 8, "How It's Gotta Be." 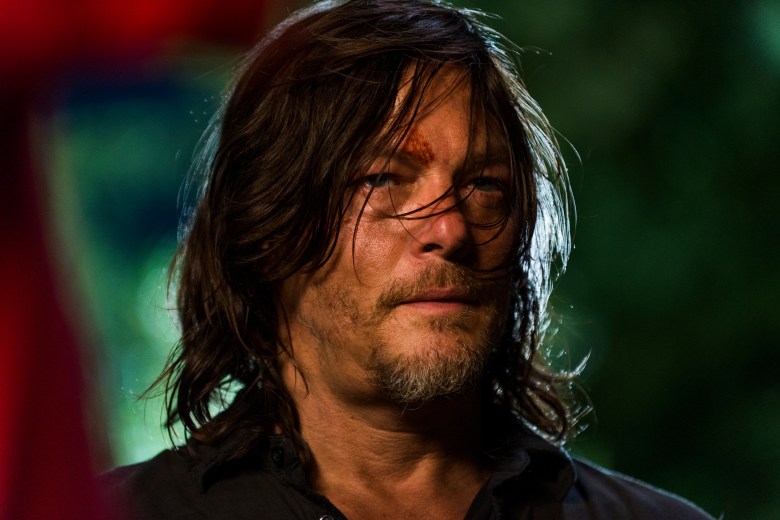 Since it’s the mid-season finale, basically every named character gets at least one line of dialogue, but the biggest focus is poor ol’ optimistic Carl, who grew a pesky conscience between seasons. And we all know where a conscience gets you on “The Walking Dead.” The episode is titled after one of Carl’s lines of dialogue (in one of those patented, infuriating “Oh, by the way” flashback moments of character development that the show loves to use) where he tries to convince Rick that he should probably start thinking about the world that will exist after the war. But the episode is largely unconcerned with the moral arguments the show’s been raising all season, in favor of a lot of running and shooting (which, fair enough, has also been heavily featured all season). There’s plenty of Carl, but it doesn’t add up to much except a death sentence.

Seriously, how did the Saviors escape Sanctuary? It’s the plot point the entire episode hinges on, the thing that turns the entire tide of the war, and the Saviors that are asked directly about it this episode can only whisper “Eugene” with hushed reverence. And that’s okay as far as it goes, but the Saviors had to get away and take out all of Rick’s lookouts so they could get the drop on everyone, so even a cursory explanation seems to be in order, but the idea seems to be “they just did.” The secrecy is downright distracting, and when it comes to poor choices this episode, it’s just the tip of the iceberg.

Here are a few frustrating things that happen during “How It’s Gotta Be”: Daryl drove a truck into Sanctuary and apparently just headed straight home afterward, because he’s back in Alexandria at the start of this episode and thus completely misses the Saviors’ escape. Eugene decides to help Gabriel and the doc escape Sanctuary, except he just freed all the Saviors, so where are they supposed to go, exactly? Maggie, who you’ll recall is “the widow” in the much-referenced “the King, the widow, and Rick” triumvirate of Negan’s Most Wanted, is allowed to return to Hilltop completely unmolested, where she promptly vows to continue fighting. And, of course, Carl gets bitten by a zombie off-camera while helping Siddiq. This is all just characters acting dumb for no reason, and it’s all too much for this episode to bear, especially when it plays out so slowly over 90 minutes. So let’s talk about Carl. Killing Carl off is a big deal, because the show only has a few “there from the beginning” characters left (and he better die come February, or else the show will have managed to pull an even bigger bait-and-switch than Glenn’s false demise back in Season 6). But it still feels pretty tacked on, considering his help for Siddiq just bookends the Savior attack, which preoccupies him for most of the episode and feels completely untethered to Carl’s attempts this season to help others. He basically has to put his actual story on hold so he can go watch Alexandria get burned to the ground. Was there really not a way to integrate the two stories? There’s a good scene where Carl offers his life to Negan to end the conflict, but it’s just a feint to buy time while Daryl’s convoy gets away. It’s all over the place, so when Carl reveals the bite at the end, it’s more of an “Oh” instead of an “Oh no.” The investment is just in Carl’s longevity on the show, not on what he’s done this season that led him here.

If you thought there was some dramatic juice in Daryl splitting from Rick on how best to handle the Saviors, well, the show certainly doesn’t seem to think so, because everyone’s basically fine with Daryl’s move. Even Rosita, who spoke out against the plan last episode, doesn’t do more than shrug here, even when it’s distinctly possible that Daryl’s plan is what helped the Saviors escape. Even setting aside the moral questions that seemingly only I am interested in, it’s possible Daryl just lost the war! He probably deserves somewhat harsher words than “Well, it seemed like a good idea.” Rick’s initial plan was pretty dumb, but Daryl somehow managed to do even worse and no one seems to care. Even the Saviors don’t seem to care all that much, considering how tame their revenge is. But the Saviors have always had a “proportional response” problem (see: Negan letting Rick live all those times). Before Simon inexplicably lets Maggie go, he decides to shoot someone in Maggie’s truck for the traditional “kill one as an example” Savior execution. The other passengers are Jesus, Dianne from the Kingdom, and some rando. Guess which one dies? The rando’s death is enough to drive Maggie to execute one of her Savior prisoners and leave a message with his body saying there’s more where that came from. You see guys? That’s why you don’t let the person you’ve been pursuing all season walk free when you catch her!