The filmmaker directed a film about her own teenage fantasy as an adult, and learned a lot about consent along the way. 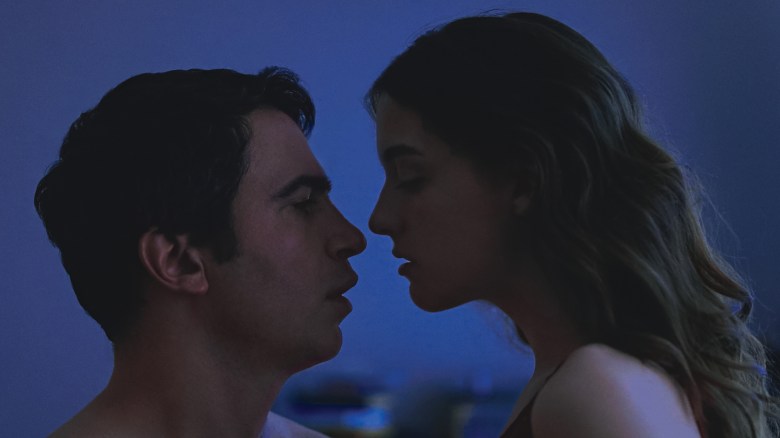 Editor’s note: “Blame” filmmaker Quinn Shephard made her first film at the age of 20, and she wrote about the experiences of her own youth that helped shape what would become her debut.

When I was twelve, standing alone in a home depot, I felt it for the first time. A man staring at me, his wife a few paces behind. I always looked older than my age — 5’3” already, curves filling out, with only my gap-toothed smile as a sneaky reminder that I was not, in fact, a high-schooler. I was watching him, registering the way he looked at me. It was the same way I would feel at fifteen, being kept after class each day by a teacher who used to stare at my legs when I wore short skirts. Not afraid, not yet. Seduced, not by a man, but by a power I did not realize I possessed.

I am twenty-two years old now. I am a woman. Most days, I am treated as such. I can wear the same clothes on the subway that I did as a teenager, and yet I receive a small fraction of the advances. It seems that whatever halo surrounded me as a child has faded now. As if I had worn a sign, back then, indicating my vulnerability — alerting men that I could still be influenced, cajoled, preyed upon, that I still possessed some desire to validate myself through them.

I directed and starred in a film titled “Blame” that premiered at the Tribeca Film Festival this year. I produced “Blame” alongside my mom, Laurie Shephard, and it is poised for nationwide release in early January. “Blame” — a film I’ve been working on for seven years, since penning the first draft at fifteen years old — tells the story of a rivalry that sparks between two girls when one is cast over the other as Abigail Williams in their high school production of “The Crucible.” This rivalry is largely centered around the affections of their new drama teacher (Chris Messina).

The film goes on to delve into the inner workings of a boundary-crossing student-teacher relationship, as well as the jealousy it stirs up in a vengeful classmate (Nadia Alexander). The film is a clear parable to “The Crucible,” down to the arc of the villain, whose character would require an entirely separate thinkpiece to properly discuss. It is a movie that feels almost too relevant right now, being a narrative that deals directly (in more ways than one) with sexual abuse, as well as abuse of power. I suppose there is probably a joke to be made here about the Woody Allen “witch-hunt” metaphor as well. Of course, I had no way of predicting the current reckoning that is cleansing Hollywood — but in some ways it feels as if the timing was fated.

When I first began working on “Blame” at fifteen, I did not realize I was writing about sexual abuse.

I was a sophomore in high school, then. I had just finished playing Abigail in a regional production of “The Crucible,” and was thoroughly enamored with the experience of being cast in such a mature role. It offered a rare respite from the age of whispered crushes, Facebook snubbing, lunchroom gossip. Playing Abigail made me feel sexy, powerful. It made me feel like an adult — even though I was not old enough to get my learner’s permit, I had never gone to a party with alcohol, and I had never been kissed outside of a film set. At that age, I began to devour the movies that “Blame” now pokes fun at — movies full of high school girls in plaid skirts and red lipstick, sleeping with their teachers, their friends’ dads, their babysitting clients. Rarely did these films ever treat these relationships as abuse — perhaps because the films were directed by men who had never been taken advantage of by anyone. And I, in turn, didn’t see affections, when directed at me from charismatic adult men, as predatory. I found it flattering, exciting, cinematic, so to speak.

So often in films (as well as in life), we conflate sexuality in teenagers with sexual consent. At fifteen, I felt intellectually mature enough to handle anything. I perceived myself as sexually mature, even if I was completely inexperienced. I, like most teenagers, lacked the ability to see my own naiveté and vulnerability. I had a crush on my teacher, who would openly flirt with me in front of my friends and who frequently crossed boundaries (always stopping just short of anything reportable). I remember feeling that his affinity towards me proved I was somehow better than my peers, more of an adult. Being “desired” by this man made me feel exceptionally powerful.

Now, I realize how warped this view was. He was always the one who had the power.

In “Blame,” we watch a teacher struggle with the unexpected bond he forges with his student. He is not a career “groomer,” a creep, a pedophile. He stumbles into a situation with a girl who he believes he may love. He sees that she is an old soul, wise beyond her years. He sees that she, quote unquote, “wants it,” and so justifies himself in crossing the line. But the primary struggle for his character comes from his realization that he, as an adult, is able to fundamentally grasp that she cannot consent. She, as a teenager, is not able to truly understand this yet, no matter how precocious she may be. Ultimately, the responsibility does not fall on her to reject his advances — it falls on him to withhold them.

The earliest drafts of “Blame” were a fantasy, borne from a child’s mind not yet formed enough to recognize the psychological damage that a relationship with a teacher (or any older man) would have caused me. Even though I was intellectually able to understand that this relationship was “wrong,” I did not emotionally reject it. Re-writing and directing “Blame” as an adult, conscious of the perspective I had gained, was an extremely emotional experience.

The first time I watched “Blame” from beginning to end, after editing it in chunks of scenes for months, I cried — but not for the reason I expected. Any lingering romance in my mind was replaced by an overwhelming heartbreak. I saw, more clearly than ever before, a film about the devastating ramifications of something that I, at the age of the characters, romanticized. I realized just how sobering it was to finally hear the girls’ (yes, plural, as by the end of the film, there is more than one victim) side of such a familiar story — to truly understand the weight of their perspective. One of the more popular remarks in the latest victim-shaming craze is asking survivors why they were silent for years after their assault. Maybe it is because we as a society have made it exceptionally difficult for women to admit to themselves that they were abused, to even realize it. It’s not just that rape often does not look like it does in the movies — it’s also that, in the case of stories like these, films often portray it under the guise of romance. By choosing the man’s perspective over the girl’s (or filtering her story through a director with no point of reference) we’re able to gloss over the parts audience members are scared to think about — the emotional consequences for the child involved.

The experience of watching “Blame,” had it come years earlier, might have altered my teenaged point of view on the topics the film explores. But the journey of writing the film, scrapping drafts and reworking them for years, unaware where I would end up, was arguably much more powerful. When I am praised for my ability to capture high school in this film, it is only because I had this time- capsule, a glimpse into the mental state I left behind as I matured.

As I begin the next chapter of my life (and my career), I hope to continue to tell stories that teach me as I develop them. I hope to raise the questions that need to be asked. I hope that one day, I can support other young women the way my mom supported me, teaching them not to fear or be ashamed of their feelings, but to explore them through the safety and therapy of their art — so that one day they can see how much they’ve grown.

“Blame” is in limited release today.

This Article is related to: Film and tagged Blame, Quinn Shephard