He called it "one of my most heartbreaking mistakes," and told IndieWire he has donated his "Wonder Wheel" salary to the group Time's Up. 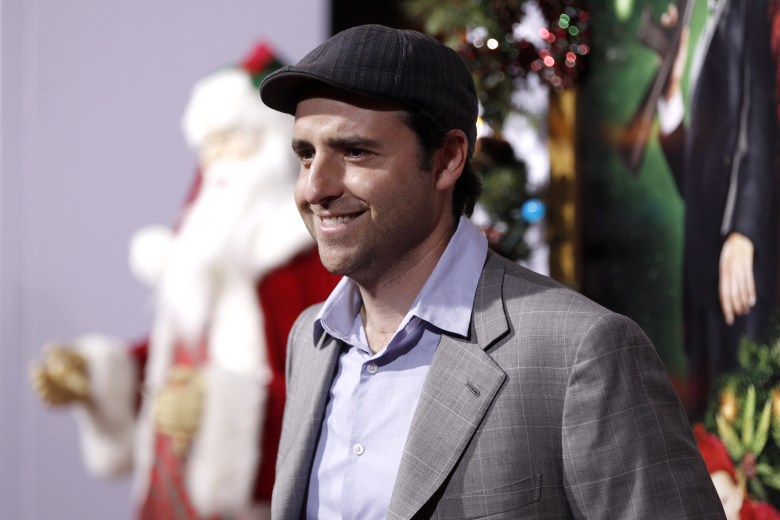 David Krumholtz took to Twitter last night to express his regret over appearing in Woody Allen’s new film “Wonder Wheel,” which stars Kate Winslet, Jim Belushi, and Justin Timberlake. “I deeply regret working with Woody Allen on Wonder Wheel. It’s one of my most heartbreaking mistakes,” he tweeted.

“We can no longer let these men represent us in entertainment, politics, or any other realm. They are beneath real men.” Allen has been accused of molesting his daughter Dylan Farrow.

Krumholtz isn’t the first actor to publicly announce that he wishes he hadn’t collaborated with Allen. “The Tick” star Griffin Newman expressed his regret last fall, saying in a series of tweets that he “believes [Allen] is guilty,” “spent a month debating whether or not to quit,” and “deeply regrets [his] final decision.”

After one Twitter user suggested that Krumholtz donate his residuals, the actor responded, “What residuals? Barely got paid. Woody doesn’t pay.”

Krumholtz expanded on his comments at the Television Critics Association press tour (where he was promoting his new CBS series “Living Biblically”), telling IndieWire after that panel that he’s a “former fan” of Allen (emphasis on former) and that he donated his “Wonder Wheel” salary to Time’s Up. Here are his full comments:

“I stand by that statement 1,000 percent. I received all the vindication and validation I need from Dylan Farrow herself, who thanked me for the tweet, and it was very kind of her to do that. I’m very moved by the Time’s Up movement as someone who has witnessed sexual harassment on set in the past. I’m not going to name names, I don’t ‘out’ victims, and I’m not going to ‘out’ perpetrators. It’s not my place, at least not now.

“But being moved by that movement and being a father of a daughter, and feeling like it’s time at the very least, whether or not you believe Woody or you believe Dylan, it’s time for Mr. Allen to stop making inappropriate films about February/December relationships. Because people don’t like it. Women are offended by it. And those voices need to be heard. As a former fan of his, I think it’s time for him to start making films that don’t further indict him. I feel ashamed, deeply regretful that I knew what I felt I knew going into it and yet I still made the decision to work with him.

“It’s a sad truth, that’s my truth, I did it, I worked with him, I’m trying to rectify the situation by no longer associating with any man that I know who would commit these kind of egregious acts. Yesterday on Twitter I tweeted that and I awoke some ire from some hardcore feminist groups who understandably said, ‘Hey, it’s a little too late to be commenting.’ I understand that, but at the same time that’s an audacious response to a genuinely heartfelt apology on my behalf.

“Some of us grow up idolizing people. And certainly for a New York Jewish kid who grew up in Queens, Woody Allen was a perfect idol. Looking back, there’s so many themes in his films are inappropriate and yet there’s no doubt that at one point he was a brilliant filmmaker. That doesn’t excuse any of the behavior and continuing of telling stories that are inappropriate.

“The last few months in Hollywood have been an interesting time for everyone. There are many men who are absolutely appalled by this and don’t know what to do. A lot of men not saying much to support the Time’s Up movement. I thought we should. Because my feelings aren’t conflicted by it. Sexual abuse, abuse of any matter in the workplace, is unacceptable. It’s time to move on from that. I donated my salary from the Woody Allen movie to Time’s Up last week without a tweet. I’ve been accused of doing this as a publicity stunt. But I did what I had to do and I’m doing everything I can. It’s time for a change.

“In the moment I did something, I went to who I saw was abused, and I asked her if she was OK. And she cried, because she wasn’t. But she told me not to say anything, and so I didn’t. I think it’s respectful to go to the victim first. It’s not my place to out the victim. It wasn’t too long ago.”

I deeply regret working with Woody Allen on Wonder Wheel. It’s one of my most heartbreaking mistakes. We can no longer let these men represent us in entertainment, politics, or any other realm. They are beneath real men.