“My Next Guest Needs No Introduction” is driven more by genuine interest than a desire to grab headlines. That might be a tougher sell, but it's no less entertaining. 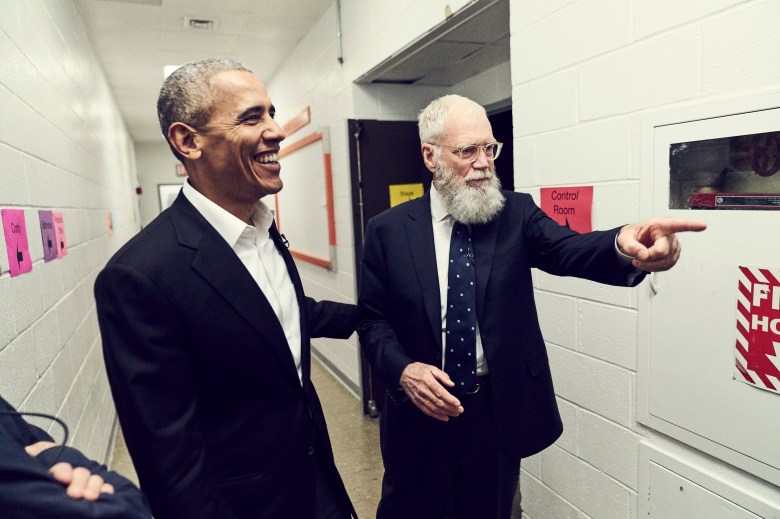 It’s almost impossible that at no point in the time between David Letterman‘s last episode of “The Late Show” and when he filmed the first interview for his new Netflix series “My Next Guest Needs No Introduction” did someone come up to the host and proclaim: “You should start a podcast!” Bringing his talents to audio probably wouldn’t be the greatest use of his skills — the most memorable parts of his time in a midnight timeslot were often written, recurring segments or ones that had a distinctly visual element to it.

But this new venture shows that, at this point in his career, the conversations are what Letterman now seems most interested in. So “My Next Guest Needs No Introduction” is a happy medium between his old job and simply flipping on a microphone with a famous person and chatting for an hour. A hybrid between interview show and “60 Minutes”-style remote segment, it’s the kind of show that someone makes when a network allows them the resources to do whatever they want. Judging by the first episode, a conversation with President Barack Obama, this is the show that above all is an expression of what its host finds most interesting.

Through the opening hour, that often makes for great TV. Whether it’s something that will engender the same kind of fandom that Letterman’s old show used to do seems less certain. And that’s OK.

From the opening minutes, it’s clear that Letterman and Obama’s conversation isn’t going to be an in-depth policy breakdown of the latter’s eight years in office. But it’s what this conversation doesn’t have that makes it refreshing. There are no gimmicky games or stunted questions designed for an easy viral YouTube clip. The closest it comes is talking about moving Obama’s daughter Malia in to college. It might be a softball question in theory, but it’s built on a mutual understanding that the two have of the challenges of watching your child move away. Letterman jokingly tries to assert his place as the question-asker, but there’s a level field here made all the easier by the lack of usual late-night fanfare involved. (There’s no Paul Shaffer appearance in “My Next Guest,” even though he provides the music for the show.)

Of course the length of this interview is another primary distinguishing factor. Stretching out over the course of an hour, there’s a looseness to the talk between two recently unemployed men constantly asked about the former jobs and continually compared to their successors. The time pressure and the constant demand to stay relevant against competition often forces current late night hosts into a rapid-fire, bullet-point line of questioning with their guests that may often yield headlines but rarely feel like genuine conversations. In some ways, this first episode feels like a throwback to a time earlier in talk show history when the most popular hosts enjoyed the luxury of extended chats with public figures, allowing for a blend of deeper personal questions and a tangential addressing of the news of the day. “My Next Guest Needs No Introduction”

Who knows if future guests will have the same rapport or interest in participating along with Letterman in the same way that Obama does. But the way that the interview and remote piece in Selma, Alabama with Rep. John Lewis dovetail so nicely makes for a thematic episode approach that network shows are rarely afforded. Everything culminates with a moment of genuine introspection on Letterman‘s part that in a subset of the business where maintaining façades is often paramount, you rarely see that level of sincere engagement.

Despite the freedom of their back-and-forth, “My Next Guest Needs No Introduction” still has a distinct sense of control to it. This isn’t raw, unedited interview footage, and even the behind-the-scenes bookends that open and close the show are neatly framed against both Letterman and Obama‘s respective media savviness. When the conversation towards the end shifts to the Obama Foundation, it does have a glint of the same kind of guest promotion that is the lifeblood of current late-night talk shows.

But if talk show watchers are yearning for that living room feel, the idea that anyone watching is a casual observer of a conversation between friends rather than guests, this may be a show that fills some sort of void. Because it’s removed from the burden of having to do late night bits or riffing on popular news cycle nuggets, there may not be as easy a hook, leaving viewers to tune in purely based on who the guest is. But should the rest of the episodes follow the spirit and overall approach to the experiment that this first one does, its value will be felt, even at one installment a month.

“My Next Guest Needs No Introduction” mentions him only in passing to Lewis, more than a half-hour into the episode, but it’s worth noting that the current occupant of the White House is not mentioned over the course of the interview. Whether that was a prerequisite for this chat happening, a friendly agreement, or (most likely) a mutual desire for the two men to talk about literally anything else, there’s an accompanying sense of relief to know that not everything in the talk show landscape has to revert back to that same subject.

The gap between when these interviews were filmed at the Marian Anderson Theatre and on the Edmund Pettus Bridge and now might be the show’s biggest blessing. Rather than be burdened by having to respond to the day’s newest horror, Letterman’s finding urgency in a different place. There’s a glimmer of hope in what this first conversation offers, but there’s also a realistic discussion about how to be better. It’s a particular brand of comedic optimism that acknowledges that there’s work to be done to improve this country and the world, even when those efforts aren’t always rewarded. If this show continues to live in that gray area, it’ll keep what makes it worth watching. It may not be a hit, but it’ll still be a distinct pleasure to have it.

“My Next Guest Needs No Introduction” is currently streaming the Obama episode on Netflix, and new episodes will be released monthly.

This Article is related to: Television and tagged David Letterman, My Next Guest Need No Introduction, Netflix