Sean McKittrick revealed what could have been at this morning's Producers Guild of America Nominees Breakfast. 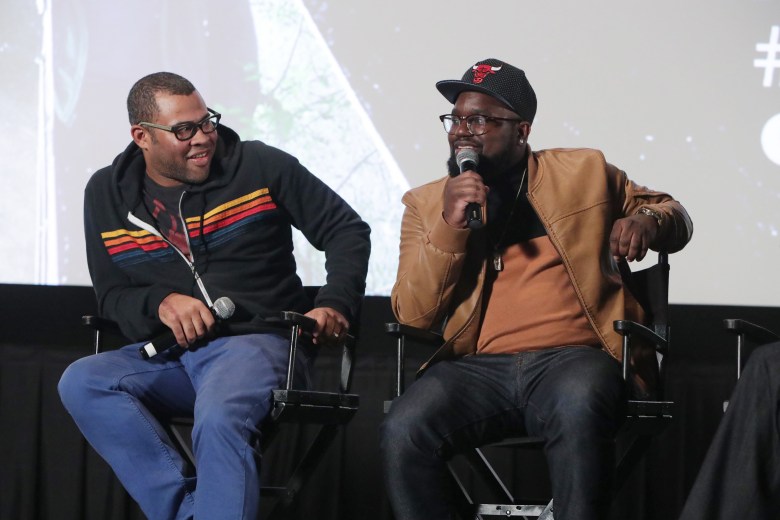 “Get Out” producer Sean McKittrick says he failed to convince writer-director Jordan Peele to take a pivotal role in his $250 million-grossing debut. “We tried to force him — not force him, but we tried to encourage him to play the part of Rod that was ultimately played by Lil Rel [Howery],” said McKittrick during a panel at the Producers Guild of America Nominees Breakfast on January 20.

Peele, then best-known for his work on the Comedy Central series “Key and Peele,” declined, stipulating, “‘The moment the audience sees my face, they’re not going to take [the film] seriously,'” said McKittrick, a partner at QC Entertainment. “He knew from the get-go how to keep the tone, which was very thin-ice throughout, it could veer off at any moment.”

In the film, TSA agent Rob rescues his friend Chris (Daniel Kaluuya) from literally losing his mind while meeting his white girlfriend’s (Allison Williams) family. When Chris sends Rob a picture from a get-together at their secluded cabin, Rob recognizes one of the guests as a missing person, and realizes Chris is in danger. McKittrick said Peele pitched him the film over coffee as, “‘Well, here’s one that nobody would ever make’”; McKittrick bought the script, then the coffee. The breakfast was held in Beverly Hills at The Saban Theatre’s Steve Tisch Cinema Center. Onstage with McKittrick was one producer from each of 10 films that will compete against “Get Out” tonight at the PGA Awards for the Darryl F. Zanuck Award for Outstanding Producer of Theatrical Motion Pictures: Graham Broadbent (“Three Billboards Outside Ebbing, Missouri”), J. Miles Dale (“The Shape of Water”), former PGA president Mark Gordon (“Molly’s Game”), Barry Mendel (“The Big Sick”), Evelyn O’Neill (“Lady Bird”), , Amy Pascal (“The Post”), Margot Robbie (“I, Tonya”), Peter Spears (“Call Me by Your Name”), Deborah Snyder (“Wonder Woman”), and Emma Thomas (“Dunkirk”). PGA co-president Gary Lucchesi moderated the talk, which ran more than two hours.

“Get Out” has had a bit of a head-scratching award season. First the dark, genre-subverting spectacle was classified as a musical or comedy by Golden Globes voters; then co-stars Erika Alexander, Marcus Henderson, Betty Gabriel, and Howery were all left off of its Outstanding Performance by a Cast in a Motion Picture SAG nomination, an honor that will be presented tomorrow. The omission was due to a SAG-AFTRA technicality: “Motion Picture Casts shall be represented by those actors billed on separate cards in the main titles,” which was not the case for those four.

Rey received much better news from Fox recently: He will serve as writer, executive producer, and star of “Rel,” a multi-camera comedy pilot announced on January 19.

While Peele did not want a role in his awards contender, “Molly’s Game” producer Gordon said writer-director Aaron Sorkin basically included himself in that script: Jessica Chastain of course played the namesake Olympic skier-turned-poker maven, but Sorkin “kind of wrote that other part” — attorney Charlie Jaffey — “for himself. And I don’t mean literally, but a schlubby, Jewish guy. The character was based on a bunch of different lawyers…But in his mind, it was him and Jessica starring in the picture together. And we had a lot of conversations about who should play that part, and I think that Amy [Pascal] and I pushed him to think of himself as if he were Idris Elba. And he kind of took to it.”

This Article is related to: Film and tagged Get Out, Jordan Peele, Producers Guild of America