Morgen, along with editor Joe Beshenkovsky, made a 90-minute documentary after sorting through 1,500 hours of footage. 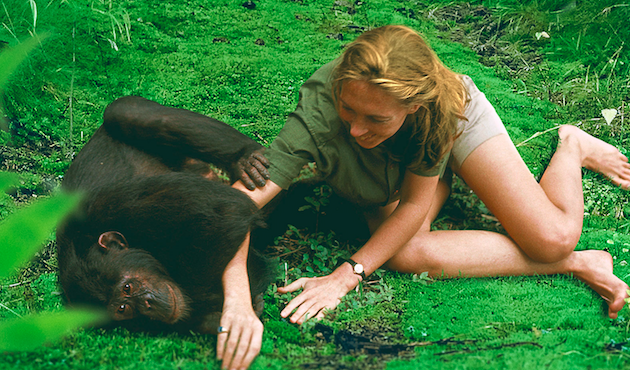 Editor’s Note: This article is presented in partnership with National Geographic Documentary Films’ Jane. Learn more about the film here.

There have been plenty of documentaries about Jane Goodall, but none that look like “Jane”—which is probably because the National Geographic film was compiled from hundreds of hours of original footage of the legendary primatologist on her journeys to study chimpanzees in Africa in the 1960s.

That meant director Brett Morgen and editor Joe Beshenkovsky had to sort through 1,500 hours of film — most of which was composed of silent, random shots by Goodall’s eventual husband, the famed wildlife photographer Hugo Van Lawick, that he captured while documenting Goodall’s study in Gombe from 1962-66.

But the two managed to compile a 90-minute film, scored by Philip Glass, that tells the story of Goodall’s research, her love story with Van Lawick, the early years of her son, Grub, and provides plenty of insight into the motivations of the young anthropologist. Here is the story of the editing process that brought this dense tale to life.

The first hurdle was sifting through an enormous archive of material in order to pinpoint key footage.

“Usually I have assistant editors collate everything chronologically and then I screen everything top to bottom before I write a script and begin editing,” Morgen says. “For ‘Jane,’ we anticipated it would take about three weeks to get through the material.” What they didn’t anticipate was that the film reels were not stored in chronological — or apparently any — order. Reel one comes up and it’s 28 minutes of pure randomness. The first shot might be of Jane walking up a hill, shot two might be of a butterfly, shot three would be water, shot four another shot of water, shot five it’s Jane walking up a hill. And there were no screening notes or guide for any of this footage.”

Dividing the footage into eight different categories, and identifying individual chimpanzees, became the next challenges.

“We put all the footage of Jane in one category, chimps mating in another category, chimps eating in another and so on,” Morgen says. “Only eight of the chimpanzees were relevant to our story, so just getting to the point where we could identify every chimpanzee was challenging. Here we were, more than 55 years removed in an editing bay in Culver City, California, trying to figure out who’s who. We really had our work cut out for us before we could even begin to assemble the film.”

Morgen saw the primary story to be Jane’s unique relationship with wildlife.

“I saw this as a parable of the garden of good and evil, of Adam and Eve,” Morgen says. “The movie opens with a montage of insects and animals and nature all living harmoniously in Gombe, like Eden, in a way. The last thing we see is the snake, the serpent. And underneath that image you hear the sound of a boat, the first sign of man coming into the area. We cut to a shot of the boat, and it’s a very loud, abrasive sound. There’s this great symmetry in nature prior to Jane’s arrival. As we got deeper into the research, I began to have very mixed feelings, not about Jane or her intent, which is beyond inspiring, but about the fact that those chimpanzees lived in that area for eons, yet over the course of 60 years their world was going to be turned upside down.”

Critical too was Goodall’s blooming relationship with Van Lawick.

“The amazing thing is that you’re really watching Hugo fall in love with Jane on camera,” Morgen says. “That’s a rarity. You see it in classic couplings between a director and an actress, like von Sternberg and Marlene Dietrich or Orson Welles and Rita Hayworth. In the case of Hugo and Jane, that relationship breaks the fourth wall. Going through the footage, we identified every time Jane looked directly at the camera, reacting to Hugo, so we could build that into a montage. That was integral to the story.”

Glass’ score was a critical component to tying the picture together.

“Philip’s music is very metric, which works really well for the montage approach,” Morgen says. “There’s this almost Disneyesque element, the way the chimpanzees and all the insects, lions and other animals in the Serengeti move in sync with the music. That’s intentional on my part because there’s a magical component to Jane’s and Hugo’s romantic view of nature. I wanted to get across this great harmony and symmetry taking place. So we met with Philip early on and once he agreed to score the film, I cut the scenes to a temp track of some of his previous music.”

The film’s strength in stitching together a compelling narrative has been praised by critics, as the documentary has received a slew of honors and accolades, including:

This Article is related to: Uncategorized and tagged Jane, Jane Custom Editorial