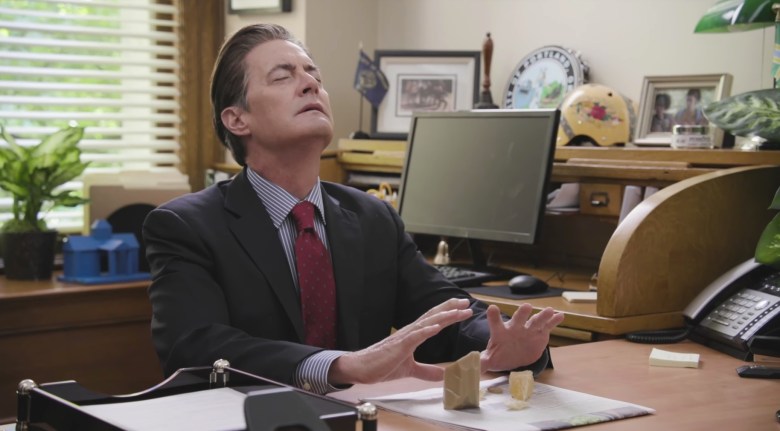 In the wise words of Kyle MacLachlan, “A rainbow isn’t white,” and neither is Portland — at least, it won’t be totally white after MacLachlan’s Mayor of Portland gets through with his diversity initiative.

In a new sketch from Season 8, Carrie Brownstein and Fred Armisen again sit down with MacLachlan’s beloved, if occasionally misguided, mayor to address a new article that calls Portland the “least diverse” city in America.

The Mayor first looks internally, but finding no true minorities working in his administration, he takes more drastic steps. Will it work? Can “Portland” shed its reputation of being very, very white? It’s got to be easier than erasing the idea that it’s very, very wet, but tune in to the final season of “Portlandia” to find out which plan, if not both, comes true.

The video is not only your first look at Kyle MacLachlan in the final season, but the sixth in a series of videos premiering on IndieWire before the Season 8 debut. IFC and IndieWire are partnering to bring you exclusive sketches from “Portlandia” Season 8. Over the next few weeks, IndieWire will debut a new sketch from the final season, leading to the Season 8 premiere on January 18.

This week’s sketch comes from Episode 7, “Most Pro City,” and stars both Fred Armisen and Carrie Brownstein. IFC announced in January 2017 that the new season would be “Portlandia’s” last, but there are big plans in place for the last run, including a slew of returning guest stars like Ed Begley Jr., Jeff Goldblum, Natasha Lyonne, Portlandia’s Mayor (and recent Golden Globe nominee) Kyle MacLachlan, and Kumail Nanjiani.

Season 8 will consist of 10 episodes and air every Thursday on IFC. Come back to IndieWire every Monday for a new sketch as excitement builds for the final season. Watch the new sketch below.

This Article is related to: Television and tagged IFC, Kyle MacLachlan, Portlandia