Ian Bricke and Matt Levin unveiled three movies at Sundance, and have at least twenty more coming in 2018. 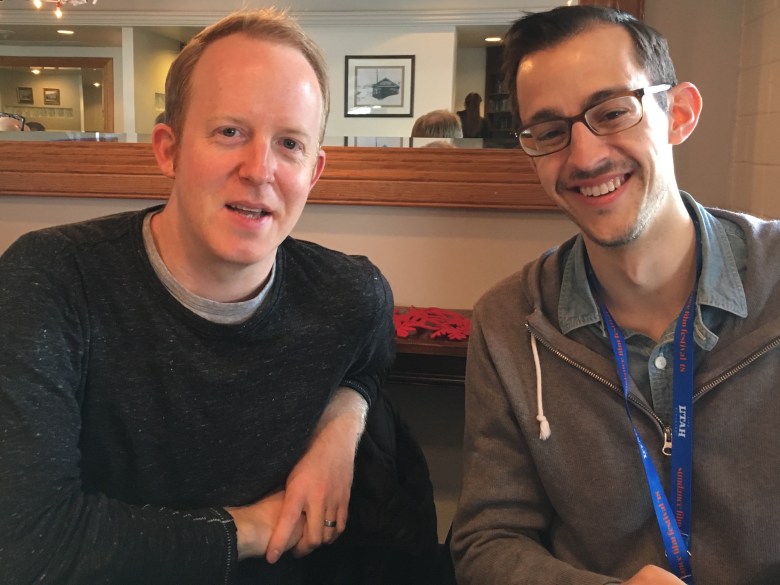 Ian Bricke and Matt Levin at the Yarrow.

On opening night of Sundance 2018, writer-director Tamara Jenkins premiered her new film “Private Life” to rave reviews. The New York drama was headed for derailment when she submitted it to Netflix Indie Content directors of content Ian Bricke and his lieutenant Matt Levin; they loved her script about an infertile middle-aged couple (Paul Giamatti and Kathryn Hahn) desperately trying to have a child by any means necessary. The drama turned out so well that Netflix is holding it for the fall festival circuit.

Among those in Eccles Theater seeing “Private Life” for the first time was Netflix chief content officer Ted Sarandos. That’s because if a film is budgeted under $10 million, he delegates full greenlight authority to Bricke, who pushed the $9 million “Private Life” into production and approved the last-minute casting of unknown actress Kayli Carter.

There’s also “The Raid” director Gareth Evans’ return to Wales with crazy period horror thriller “The Apostle,” and “Eggplant Emoji,” which Bricke described as an “outrageous boy comedy, ‘Superbad’ with a severed penis,” he said. “You can be successful by being specific, without the P&A risk.”

Sarandos has placed Indie Content under the supervision of Original Films head Scott Stuber, who oversees such bigger-budget films as Will Smith-starrer “Bright,” Angelina Jolie’s “First They Killed My Father,” Bong Joon-ho’s “Okja” and Martin Scorsese’s “The Irishman.” Stuber approves Indie Content films over $10 million and carries his own greenlight authority.

“We saw there was a real audience for all shapes and sizes of movies,” said Bricke, “even modestly budgeted films in the Duplass zone. The economics of buying after-market from distributors tends to drive up the cost, and we had a challenge getting access on a worldwide basis. So we said, ‘Let’s engage early to help the movies get made, and have access to all rights.'”

Being able to acquire worldwide rights isn’t always easy. Which is why over the past few years, Netflix has slowly increased the number of its in-house productions. At about 20-25 films a year, Netflix’s Indie Content division produces more than a major studio; however, few of these titles surface at film festivals or theaters. (Some might define these programmers as TV movies.) For example, Mark Duplass produced, wrote and starred with Sarah Paulson in Alex Lehmann’s “Blue Jay” (2016), Oz Perkins directed Ruth Wilson in haunted house movie “I Am the Pretty Thing that Lives in the House,” and Emily Hagins directed family flick “Coin Heist,” among countless small Indie Content titles most of Netflix users have never heard of; still to come are dystopian “Io,” starring Margot Qualley as a girl deciding whether to remain on an abandoned Earth; and Josh Charles as a coach in “Amateur,” starring Michael Rainey Jr. as a basketball star.

The only way Bricke and Levin’s small staff (which gets support from the larger motion picture operation) can handle this volume is by paying close attention to development, making sure everyone is on the same page — and then letting producing partners run the show. Their chief of physical production, indie producer Jeremy Walker (“Half Nelson,” “Sugar”) is also on the case. Clearly, Sarandos has to delegate to his TV and film teams to keep the content churning through the system, as the level of production keeps rising, year after year.

In any case, Netflix acquisition czar Matt Brodlie did not end up buying anything at Sundance 2018, partly because he didn’t have to.

The rules of engagement at Netflix Indie Content are the same as any specialty studio: Match the budget to its audience. Of course, Netflix doesn’t have the friction of luring people to a brick-and-mortar cinema, and the streaming site boasts the ability to reach multiple niche audiences via targeted, sophisticated marketing and those mysterious algorithms, created by some 1,500 engineers.

“You present a movie to an audience in personalized ways based on viewer behavior,” said Levin. “When creating artwork for the platform, we have 15-20 pieces leaning into different thematic and graphic elements. It lets you talk about the movie in different ways.”

How did these films do? Some suggest that movies get lost in the ether when they disappear into the endless Netflix content maw. To the contrary, says Bricke, these films have a long tail, pulling viewers long after they first appeared on the site. “We keep finding pockets of audience for movies,” he said. What that means, of course, is anyone’s guess: We will never know the numbers.

At Sundance 2016, writer-director Macon Blair pitched Bricke and Levin the dark romance “I Don’t Feel At Home in This World Anymore,” which swiftly went into production that February. Less than a month after the film won the Grand Jury prize at Sundance 2017, it was on the streaming service. “Normally film fans all around the world hear about a new Sundance discovery and want to see that movie,” said Levin, “and have to wait six months [or more] to see it in that territory, missing out on the window when it was in the zeitgeist.” (They claim the film was a huge success.) “I Don’t Feel at Home in This World Anymore”

The Netflix advantage extends to presenting their movies simultaneously around the world in 190 countries, with subtitled and dubbed versions in 30 languages. “We knew we could find an aggregated audience all over the world for movies that felt small or specialized that wouldn’t necessarily get to travel in the conventional distribution system,” said Bricke. “Maybe the audience for a Duplass film in Scandinavia is small, but it’s there.”

Netflix also says it doesn’t have to cater to the tastes that drive foreign sales companies. Among the hits Bricke and Levin cite from last year were two Stephen King movies that debuted at Fantastic Fest’s 2017 edition: “Gerald’s Game,” starring Carla Gugino as a woman trapped in a room after husband Bruce Greenwood suddenly dies, and “1922″ starring Thomas Jane. “Mike Flanagan wanted Carla Gugino,” said Levin, about the director of “Gerald’s Game.” “It’s about casting the actor meaningful to the audience it’s for, like an actor from Doctor Who that’s resonant in that market. Compromising creatively is not a great way to make a movie.”

Clearly, Netflix is betting heavily on Indie Content, and is only going to keep ramping up the volume and budgets under ex-studio player Stuber’s direction. How he manages quality control and marketing and branding these titles — which can’t all go to festivals —  is the major question going forward.