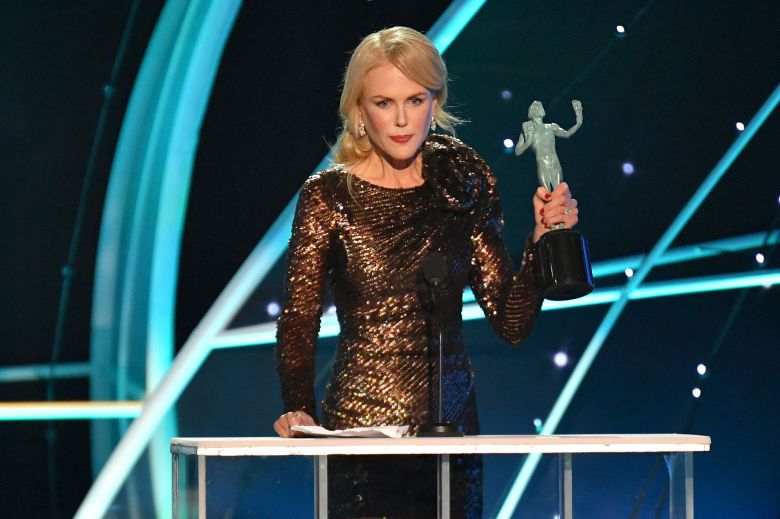 At tonight’s Screen Actors Guild Awards, “Three Billboards Outside Ebbing, Missouri” was the most-nominated film of the evening and the most winning, locking up Outstanding Performance by a Cast in a Motion Picture as well one for Frances McDormand and one for supporting actor Sam Rockwell. Only Woody Harrelson — the film’s fourth nomination, and Rockwell’s competitor, was shut out.

In its 24th year, the SAG Awards had a host for the first time, Kristen Bell; she was followed by an all-female presenter line-up. The #MeToo and Time’s Up crusades were clearly on the organizers’ mind, just one day after another set of women’s marches. SAG-AFTRA president Gabrielle Carteris told the Shrine Auditorium audience, “Truth is power, and women are stepping into their power,” and “Make no mistake: This is not a moment in time; this is a movement.”

During what was teased as a mini-tribute to her husband, Dax Shepard, Bell instead lavished praise on “Lady Bird” writer-director Greta Gerwig, encouraging her to tell more stories. Lifetime Achievement Award winner Morgan Freeman offered design improvements on the ceremony’s Male Actor bust, which appears genderless from behind.

Among the presenters was a tearful Rosanna Arquette, who said Harvey Weinstein sexually abused her at the Beverly Hills Hotel in the early ’90s. “We are inspired that so many powerful voices are no longer silenced by the fear of retaliation,” she said, thanking Asia Argento, Annabella Sciorra, Ashley Judd, Daryl Hannah, Mira Sorvino, Anthony Rapp, and Olivia Munn for speaking out against their assailants.

Women’s empowerment was also on the mind of the winners addressing the backstage press room. Toting her supporting actress trophy — her seventh SAG accolade — Janney proposed that the new national safe word is “I’m uncomfortable,” and said she looks forward to “get[ing] back to the America that I thought was great.” “I hope [the movement] doesn’t throw a wet blanket on things and I don’t believe it will, because half the business is women,” William H. Macy, the male comedy series winner, told reporters. “I have two daughters, I feel girls are ascendant and I’m thrilled for them. It’s a good time to be a girl. And I’m proud of this business, because such things as safety in the workplace, I think that’s done, we’re not going back.”

Macy continued, “It’s hard to be a man these days, but I think a lot of us feel like we’re under attack, and that we need to apologize, and perhaps we do, and perhaps we are. But we’ll keep talking.” The “Fargo” Oscar nominee also revealed that he and other male actors recently gathered to discuss Time’s Up (“Men don’t talk enough. Men don’t talk to other men. And we talked. What the hell, a little bit can’t hurt you.”)

On the red carpet — where there were markedly fewer Time’s Up pins than seen at the Golden Globe Awards January 7— Nicole Kidman revealed that if she could step into any other person’s shoes, she’d choose those belonging to Oprah Winfrey. Kidman later gave the most rousing acceptance speech of the night — her first at the SAGs, for her 10th nominated performance.

After Kidman singled out actresses she’s long admired like Meryl Streep, Judy Davis, and Isabelle Huppert, the Oscar-winner said, “I want to thank you all for your trailblazing performances you’ve given over your career, and how wonderful it is that our careers today can go beyond 40 years old. Because 20 years ago, we were pretty washed up by this stage in our lives. So, that’s not the case now.”

Women, Kidman said, continue “proving that we are potent and powerful and viable. I just beg that the industry stays behind us, because our stories are finally being told, it’s only the beginning, and I’m so proud to be a part of a community that is instigating this change. But I implore the writers, directors, studios, and financiers to put promotion and money behind our stories. We have proven that we can do this, we can continue to do this, but only with the support of this industry, and that money and passion.”

McDormand also advocated representation in her acceptance (“Representation. Those tireless men and women who represent us truly — our desires, our dreams, our individual strengths, and our ethical beliefs — to them, we owe a great deal”), but also shared that she wouldn’t mind giving less speeches like this in the future: “I come out of the woods every few years, and you invite me to the party, but there’s a lot of young ones coming up, and they need doorstops, too. Let’s think about that.”

Following the example recently set by the Sundance Film Festival and the Producers Guild of America, SAG-AFTRA announced during the telecast that it will also update its code of conduct in the wake of rampant sexual misconduct allegations in the industry. The union is comprised of 121,000 members, and this year’s nominations were chosen by a randomly-selected panel of 2,500.