Not just a clear-eyed look at the ongoing Yazidi genocide, this doc also illustrates the hard work involved to earn the world's attention. 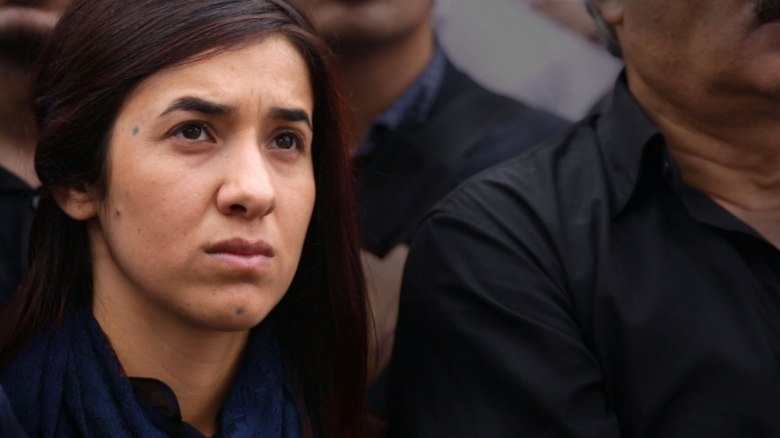 Nadia Murad, 23, only had three minutes to address the United Nations General Assembly and tell the gathered delegates her life story, an unspeakably horrific tale that includes being imprisoned and raped by the ISIS militants who murdered her relatives. She then escaped the ongoing genocide of the Yazidi people en route to join forces with Amal Clooney, who helped her take legal action against the terrorists responsible for these crimes against humanity. Most of us would probably need more than three minutes just to tell someone about the trials and tribulations of their commute to work that morning.

Of course, by 2016 Murad was quite good at distilling her biography, having spent the previous year practicing on countless journalists (either in English or in her native Kurdish), receiving one of Glamour Magazine’s 2016 “Women of the Year” awards, and becoming the first person to ever brief the UN Security Council on the subject of human trafficking.

Murad is a remarkable person, but she’s only the subject of a remarkable documentary because filmmaker Alexandria Bombach recognizes how little that matters. Make no mistake, “On Her Shoulders” offers a profound testament to Murad’s suffering, courage and unfathomable tenacity, but this deceptively standard-issue portrait also recognizes that compassion has never been so competitive, or in such short supply.

Murad is a singularly powerful example, but — right or wrong — her story must earn our attention at a time when new tragedy seems to unfold every day. She still has to shoulder the burden of telling it, and telling it well. It’s not enough for her to be a survivor; she also has to be a compelling and concise emblem for a non-Muslim ethno-religious minority who are being wiped off the face of the Earth without making the evening news. It’s not enough that she lived through atrocities that even the most empathetic of us can’t fully understand, but she also has to sell us on the threat they still pose to the people she left behind.

“On Her Shoulders” does a dutiful job of informing viewers about the Yazidi genocide, but Bombach knows that most viewers are more interested in the sordid details of a horror story than in what they can do to help. Human nature isn’t always very nice. And so, Bombach pointedly denies us the information that we’re craning to hear. You can learn more about Murad — more about the raw data of her misfortunes, anyway — by reading her Wikipedia page than you can by watching this documentary. “I didn’t want people to know me as a victim,” she says. And she’s not; at least, she’s not only that. She’s also a vessel, and a voice; and by showing her to be those things and more, Bombach’s film also positions her as a symbol of voicelessness.

In this context, one of the most important things about Nadia Murad isshe’s a compelling screen presence. “On Her Shoulders” never breaks the mold — the film is a formally staid hodgepodge of talking head interviews and vérité footage of Murad traveling the world with representatives from the human rights non-profit, Yazda — but its heroine holds our attention, no matter the mode. She’s so limpid and self-possessed that you often understand the essence of what she’s saying before it’s been filtered through her translator.

Of course, no words (of any language) would be necessary to convey how surreal it must be to go from being enslaved by ISIS to doing the American talk show circuit and being hounded for selfies in the span of two years. Bombach has the good sense to probe these areas, to show that Murad isn’t unflappable, to explore how much hard work it is to be heard. The people who profile Malala make it look so easy! The best scenes in the film are the ones where Murad is sitting with her Yazda allies in an apartment in Greece or a Starbucks in Manhattan and practicing her testimony, reciting the lines that might be responsible for saving an entire tribe of people like an actor preparing for an audition. Murad can’t possibly be healed while thousands continue to suffer, but she never could have anticipated what reconciling those realities might entail.

In a film that often loses narrative thrust as it acquires emotional intensity, these moments have a way of restoring some kind of balance to Bombach’s doc, which — likes its star — is uncomfortably wedged between freedom and despair, sincerity, and performance. That isn’t to say that Murad’s testimony is inauthentic. On the contrary, it’s so wrenching because she feels the weight of her loss so intensely each and every time she’s asked to recount it.

Her journey builds to that U.N. address, where Murad’s remarks are cut down and buried under layers of emotionally explicit music. In the moment, it’s intensely frustrating that Bombach doesn’t let us experience what her subject has been working toward (after all, the speech is pretty short), but the fact is her specific words are far less important than the United Nations’ decision (and ours) to take their spirit to heart. If “On Her Shoulders” struggles for an ending, perhaps that’s because we have to supply our own. People like Nadia can’t fix the world, but this vital documentary is proof that it’s heroic enough just to be heard.

And for the record, Nadia Murad ultimately spoke at the U.N. for four minutes and 28 seconds. Nobody seemed to mind.

“On Her Shoulders” premiered in the Documentary Competition at Sundance 2018. It is currently seeking distribution.

This Article is related to: Film and tagged Nadia Murad, Reviews, Sundance