From "Avatar" to "The Lord of the Rings," these Oscar-winners use CGI and motion capture to define 21st century visual storytelling. 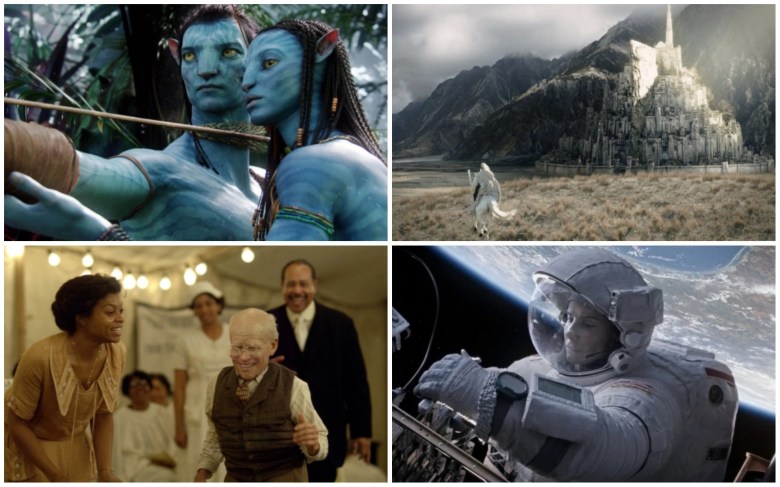 Clockwise from top right: “Avatar,” “The Lord of the Rings: The Two Towers,” “Gravity,” “The Curious Case of Benjamin Button”

The dream-within-a-dream premise of Christopher Nolan’s mind-blowing sci-fi sensation doesn’t need a pileup of special effects to make its provocative, enigmatic structure such a remarkable ride. But it certainly doesn’t hurt. As “Inception” fleshes out the capacity for its dream-hopping thieves to control their surroundings, the movie’s visual allure continues to expand into unexpected places: Look no further than a dizzying shootout in the confines of a room that turns upside down, as its combatants roll around with a dexterity that bests Fred Astaire at his peak. Then there are the constant maze-like maneuverings of entire cityscapes that seem to collapse and contract with the seamless movements of a surrealist painter flicking his brush toward the unknown. Paul Franklin blended digital animation with miniatures to craft an unprecedend blend of spectacle and realism in every set piece. Even the nightmares become a wondrous assemblage of light and shadow in unexpected places, as Nolan turns the entire experience into an ambiguous ride perched somewhere between reality and dreams where waking up is never guaranteed.—Eric Kohn “The Curious Case of Benjamin Button”

Cast as the nominal, reverse-aging lead in this fable fashioned from a 1922 F. Scott Fitzgerald short story, Brad Pitt did not appear onscreen until the 52-minute mark. The Pitt-esque visage the audience sees of a man in his 80s, 70s, then 60s is actually a CGI creation from the neck up, courtesy of “emotion capture,” a visual effects technique crafted specifically for the film. Pitt’s transformation was far from the only daunting sequence for director David Fincher and his collaborators: Cate Blanchett’s character — Button’s onetime wife — matures eight decades, a supporting character sustains seven lightening strikes, and a backward-zooming hummingbird appears twice. Made for a reported $150 million, “The Curious Case of Benjamin Button” received 13 Oscar nominations and triumphed in three below-the-line categories: Best Art Direction, Makeup, and — of course — Visual Effects, the latter a win for Eric Barba, Steve Preeg, Burt Dalton, and Craig Barron. —Jenna Marotta “Lord of The Rings: The Return of the King”

All three films in the “Lord of the Rings” trilogy boast jaw-dropping special effects that still hold up remarkably well more than a decade later, but Peter Jackson saved the best for last. The epic final chapter of the saga includes 1,488 visual effect shots, almost twice as many as there are in “The Two Towers,” and just about every single one of them counts. Not only does “Return of the King” boast one of the most epic and astonishing battles in movie history — the fighting on Pelennor Fields makes the Battle for Helms Deep look like a playground skirmish, what with Oliphaunts stomping around and the MASSIVE software animating thousands of horses and orcs — but CGI is used for intimate detail as well, as Andy Serkis’ motion-captured performance as Gollum achieves an unprecedented degree of depth and nuance for a digital character. Even today it would be extraordinary for a film to entrust a digital character with so much emotional baggage, but the extraordinary team at WETA managed to code something ineffably real. The stakes of Tolkien’s incredible story never feel higher than when Gollum is being strangled by the last shred of his humanity. —David Ehrlich Alfonso Cuaron’s “Gravity” is the “2001: A Space Odyssey” of the 21st century. It’s also pure cinema in the tradition of Hitchcock, connecting Framestore’s innovative VFX to Andy Nicholson’s Oscar-nominated production design and Emmanuel “Chivo” Lubezki’s equally innovative cinematography. The opening 13-minute shot alone will be studied for its visual and dramatic force. The long, exploratory shots of Sandra Bullock floating in space with alternating points of view, tethered to a mise en scene of perpetual motion, balanced primal terror with celestial beauty.

Of course, it took some new techniques to pull off such a realistic-looking adventure in zero gravity space (including the construction of the LED Light Box for spinning Bullock, cameras mounted on computer-controlled robot arms, and custom-designed wire rigs for rotating and tilting the actors like marionettes). But to achieve such elastic visual poetry required a new kind of reverse engineering from Framestore in London, under the VFX supervision of Tim Webber. Remarkably, everything in “Gravity” was animated ahead of time and then the actual faces of Bullock and George Clooney were placed into the virtual environments. Even their suits and helmets were CG. The only practical sets were the interiors of the two capsules and parts of the ISS space station. This entailed finessing the animation while factoring in flexibility for the actors’ performances.

The detail of the animation is absolutely stunning. There’s a new kind of cinematic intimacy being inside Bullock’s helmet with her, watching the panic-stricken breaths she takes and seeing the reflection of the shuttle in her eye. “Gravity,” therefore, marked yet another milestone in virtual production. There are no CG characters, but it’s “Life of Pi” in space with Clooney as the tiger. —Bill Desowitz James Cameron’s “Avatar” was the VFX game changer in 2009. With its revolutionary virtual production techniques, it broke the wall between director and viewer, allowing us to experience a whole new visceral and immersive kind of stereoscopic cinema. It changed the way VFX-intensive movies are made, discussed and written about. Steven Spielberg proclaimed it an “emotional spectacle.” “Avatar” has since influenced and democratized virtual production throughout the industry.

Thanks to the “director-centric” workflow created by Rob Legato (“The Lion King,” “The Jungle Book”), Cameron was able to make his hybrid sci-fi adventure like a live-action movie. Performance capture (or E-Motion capture) was brought fully on-set with the Simulcam, allowing Cameron to see and shoot everything in the virtual world on a motion capture stage with his actors. He observed directly on an LCD monitor how the actors’ CG characters interacted with the CG alien world of Pandora in real-time. Digital and live-action thus became one.

Meanwhile, Weta Digital (under the Oscar-winning supervision of Joe Letteri) developed a VFX workflow that supported the CG character animation for the bioluminescent species and virtual environments of Pandora. It required a whole new level of building characters and environments. For the animation, Weta put a lot of effort into the facial solves and tracking. The New Zealand studio also created a new optical solver for the eyes to track them. Rather than building this whole world procedurally, Weta hand painted everything to make sure that it was of the highest quality and uniform in 3-D space. They additionally adopted a global illumination system to store information about the effects of each light in spherical areas. Ultimately, though, photoreality was taken to a new level of achievement, and we can expect even greater results in the four sequels, including innovative underwater performance capture by Weta. —BD

This Article is related to: Film and tagged Avatar, Lord of the Rings, VFX