"Phantom Thread," "Call Me By Your Name," "Molly's Game" and other Oscar hopefuls look to Tuesday in hopes of a box-office boost. 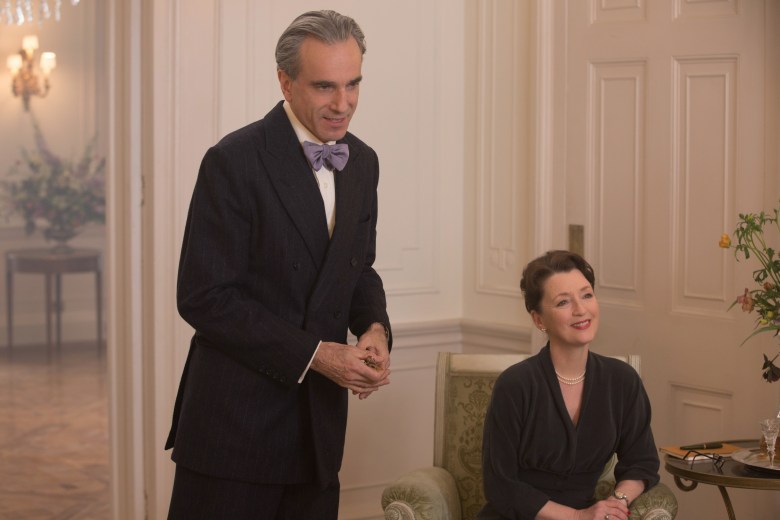 Tuesday’s Oscar nominations could add $100 million or more to the box office, but for now new titles don’t have much to say for themselves. In a non-holiday weekend, six titles grossed $31 million, down less than a quarter from last week. Still, that’s way up from last year, a period that was powered by the widely popular “Hidden Figures.”

A higher than usual number of new releases have yet to report numbers, perhaps with distributors more occupied with battles over future films than keeping track of their current entries. “Mary and the Witch’s Flower”

This Japanese animated adaptation of the popular’s children’s novel is Studio Ghibli in style if not actual production company. Niche distributor GKids, which most years has at least one Oscar nomination for animated film (less likely this year, with new selection rules) qualified this with a week in Los Angeles in December. GKids pushed this out as a Fathom event release, with more than $1 million of the gross coming from Thursday results from 573 theaters. The strong per-theater result suggests major potential for top-end animated releases — otherwise tricky to release when foreign and unknown.

What comes next: Some expansion possible, with holdovers likely among existing theaters. Italy’s Oscar submission (though not shortlisted) found modest results as one of the last openings at Manhattan’s soon-to-close Lincoln Plaza. This throwback to the country’s neorealistic film tradition is set among the Roma community in the capital city.

What comes next: Los Angeles and other cities open in two weeks, with streaming availability starting this Friday.

This documentary of the mass slaughter of kangaroos in Australia (both as pest reduction and for food) found minor results in its initial two-theater New York/Los Angeles debut.

What comes next: Most upcoming dates are limited showings both larger and small cities, beginning with filmmaker-attended events in Oregon and Washington next week. The second week for this Lebanese Oscar Foreign Language semi-finalist went up slightly, which is an unusual and positive sign. A nomination would keep that momentum going.

Steven Spielberg’s Pentagon Papers retelling saw a (reasonable) 37 percent drop in second wide week. Still, that’s weaker than the 26 percent initial drop for “Bridge of Spies” (which opened to a less initial gross). This should head to a $70 million+ total, with further momentum to be determined by how much the Academy likes it this week.

The first wide expansion for Paul Thomas Anderson’s London fashion world drama showed mixed results, similar to his recent films finding resistance as they hit more theaters. This is one title likely affected by the large number of already-established titles competing for attention. Its future will depend on its Oscar positioning, which is uncertain beyond Daniel Day-Lewis’ likely Actor nomination.

By next weekend, this Churchill 1940 retelling will have bested “The Big Sick” as the top specialized release from 2017. Focus has done a terrific job of maximizing its potential at a time when multiple other biopics have withered on the vine with few exceptions.

Nearly $15 million is a terrific result for a film that still hasn’t played in more than 800 theaters any single week. This recounting of the Tonya Harding’s hardscrabble Olympic career needs only expected Oscar nominations to break out further nationally with an even wider release.

Guillermo’s Del Toro’s cross-species romantic fantasy gets to its widest point yet with continued interest. The film’s Producers Guild win portends continued strong awards interest with the potential to gross $50 million or higher. Though its grosses are declining quickly, they enhance the chance for Jessica Chastain to get a Best Actress nomination. If so (and other nods possible), it could join the list of contenders with more gross still to come.

Call Me By Your Name (Sony Pictures Classics) Week 7

SPC smartly held back a wider national break for its acclaimed film until now. It’s established in theaters just before the Oscar nominations, which should stabilize or even boost grosses. In context, the numbers are less impressive than other contenders: For example, the gross is about half of “I, Tonya” this weekend. This still looks like another $20 million+ specialized title.

Nearing the end of its third month in release, this just keeps on rolling. With it likely to rebound further after the nominations, Greta Gerwig’s acclaimed comedy should easily top $50 million. Its distributor has stuck with this Christian Bale western despite spotty initial limited results. The commitment is showing some better results with its still-limited run in advance of a wide national release set for this Friday.

Though it amassed most of its gross in its initial weeks, James Franco’s making of “The Room” saga is still adding to its decent numbers with the potential of more to come.

This Article is related to: Film and tagged Box Office, Call Me By Your Name, Phantom Thread